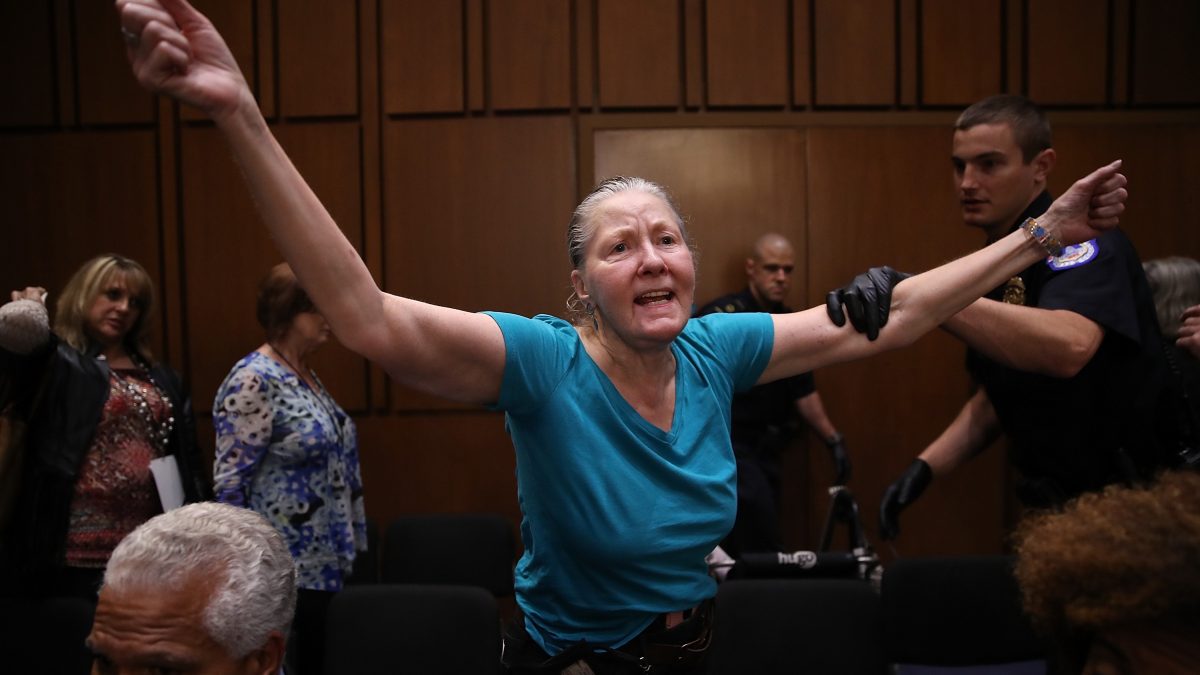 A number of people were arrested for disorderly conduct Tuesday on Capitol Hill, whether they were hauled out of the Senate Judiciary Committee room itself or were located elsewhere in the building.

The anti-Brett Kavanaugh chorus reached a crescendo before the hearing even began, and it was quite a scene to behold.

We've had motions to halt and delay Kavanaugh's confirmation hearing, and several screaming protesters in the audience. We haven't even started.

Hold on folks, it'll be a bumpy ride.

The Hand Maids have arrived. Posted on both sides of the Judiciary Committee hearing room entrance pic.twitter.com/n2ZUHOXfXI

There was plenty of yelling, screaming and interrupting throughout the day, which resulted in a reported 70 arrests by Capitol Hill police. Twenty-two were forcibly escorted from the premises within the first hour.

US Capitol Police report arresting 70 people for demonstration activities during 1st day of Brett Kavanaugh hearings. 61 charged w/ disorderly conduct. *BUT* – US Capitol Police arrest reports are not subject to #FOIA and are not publicly released

U.S. Capitol Police made 70 arrests today for protests during the Brett Kavanaugh hearing and in other parts of Capitol Hill.

This is @HeidiSpeaks engaging in civil disobedience. This is patriotism. This is protecting our fundamental right to bodily autonomy. We can #CancelKavanaugh. Call now to #BlockBrett: 855-765-1382 pic.twitter.com/71ndl64syC

We're disrupting the Kavanaugh hearings every few minutes, with hundreds of women prepared to get arrested to prevent these hearings from moving forward.

Make a donation today to support the brave women organizing to #SaveSCOTUS and #CancelKavanaugh!https://t.co/z8qeZlrJHt

You may recognize a couple of the people arrested. Women’s March leader Linda Sarsour and actress Piper Perabo were both arrested.

I was just arrested for civil disobedience in the Kavanaugh hearings.

Many citizens before me have fought for the equal rights of women. I can’t be silent when someone is nominated to the Supreme Court who would take our equal rights away.#StopKavanaghpic.twitter.com/f3SG7gmVam

I will be able to tell my daughters and future grandchildren that I STOOD UP. I was not and will not be silent when our bodies and rights are on the line. #CancelKavanaugh https://t.co/Av2G3fhDWT

According to VICE, 61 people were removed from the room and nine other were arrested on the second floor.

Much of the #CancelKavanaugh rhetoric can be traced to fears about how his nomination to the Supreme Court may tip the scales on the issue of abortion, now that retired Supreme Court Justice Anthony Kennedy is out of the picture.

This was only day 1 of Kavanaugh’s confirmation hearings, so you can expect to see more of the same.

BuzzFeed’s Zoe Tillman said that the maximum penalty for these misdemeanors is 90 days of jail time.

The Women’s March responded to the news that 70 had been arrested, claiming that the reason why is that President Donald Trump is “under federal investigation.”

Why? The president is under federal investigation. He’s used executive privilege to keep the Senate from reviewing Kavanaugh’s record.

These are extreme circumstances. They require extreme responses.

“70+ people were arrested disrtuping the #KavanaughConfirmation hearings today,” the tweet began. “Why? The president is under federal investigation. He’s used executive privilege to keep the Senate from reviewing Kavanaugh’s record.”

Trump himself responded to the Kavanaugh disruptors by saying it is “truly a display of how mean, angry and despicable the other side is.”

The Brett Kavanaugh hearings for the future Justice of the Supreme Court are truly a display of how mean, angry, and despicable the other side is. They will say anything, and are only….

….looking to inflict pain and embarrassment to one of the most highly renowned jurists to ever appear before Congress. So sad to see!

Several Republicans at the hearing said Democrats were using the hearing as another failed attempt to undo the 2016 presidential election. Senate Judiciary Committee Chairman Chuck Grassley (R-Iowa) vowed to keep the hearing on track tomorrow.

Democrats on the Committee also submitted motions to shut down the hearings several times, citing what in their view is a lack of transparency concerning records pertaining to Kavanaugh’s work in the White House. Grassley denied a number of motions to suspend the hearing pending the release of those documents.