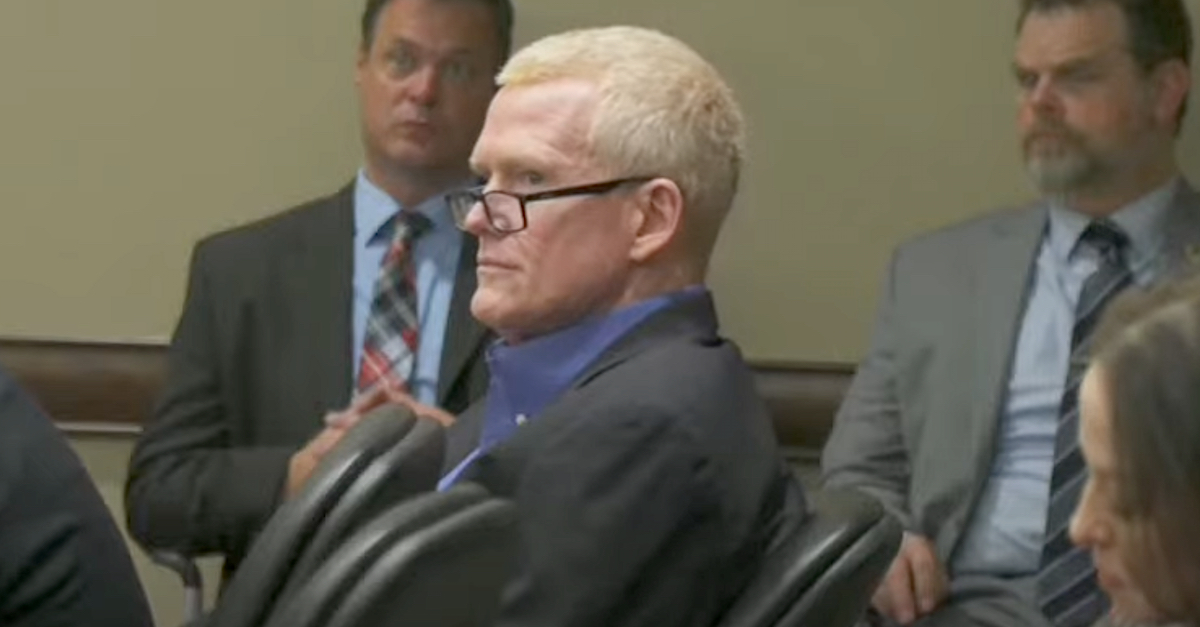 In the 63-page motion for sanctions provided to Law&Crime by Murdaugh’s legal team, the defense is asking a judge to prohibit the state from offering testimony regarding blood spatter by Tom Bevel, a former Oklahoma police officer who owns and operates a self-described forensic education and consulting company.

The motion also aims to exclude any such testimony from any of Bevel’s principals, associates, or employees and would prohibit the state or anyone else from relying on Bevel’s work product in the double murder case against Murdaugh, 54, so far.

The issue in question is the white T-shirt the suspect was wearing on the night he called police to report his wife, Margaret “Maggie” Murdaugh, 52, and son Paul Murdaugh, 22, had been shot to death. The case has made national headlines since the gruesome discovery near the dog kennels on his family’s property, the 1,770-acre hunting lodge known to locals as Moselle, in 2021.

Murdaugh insists that any blood on the shirt was transferred there when he touched the bodies after he found them and “frantically checked them for signs of life,” a previous defense motion says. The state claims that at least some of the blood is high-velocity impact spatter from one or both of the victims.

The prosecution’s position relies on a secondary report issued by Bevel – a report issued after an initial report found no stains on the shirt consistent with blood spatter that would come from a gunshot.

The second Bevel report, cited in the latest defense motion, says that “100+ stains are consistent with spatter on the front of the t-shirt.”

Complicating matters further, for both the prosecution and the defense, is that investigators effectively destroyed the t-shirt after conducting a series of tests – by cutting numerous swathes out of it and using substances that have turned it nearly black. The state claims it is no longer useful for evidentiary purposes.

Murdaugh’s team has pointed to Bevel’s shifting opinions to allege the state altered and fabricated evidence related to the shirt before it was destroyed.

The second report was based on Bevel using Photoshop to manipulate images of the shirt before its destruction.

While Bevel’s use of Photoshop is cited negatively by Murdaugh’s defense, the heart of their argument relies on earlier state-conducted laboratory tests that found the areas identified by Bevel as containing blood spatter did not test positive for human blood at all.

“SLED retained Mr. Bevel to opine that T-shirt is stained with high-velocity blood spatter that could only come from being in proximity with them at the time of their murders,” the motion reads. “It did so even though the State knew on August 10, 2021–almost six weeks before first reaching out to Mr. Bevel on September 21st–that confirmatory blood test results were definitively negative for human blood in all areas of the shirt where purported spatter is present.”

The defense says they belatedly learned about those earlier tests themselves in late November of last year. Attorneys Dick Harpootlian and Jim Griffin write that Bevel was then made aware of those negative blood test results by Murdaugh’s team roughly a week later.

Bevel, in response, issued a supplemental report where he claims the blood-presence test used by the state will always fail to detect human blood in a surface previously treated with LCV – the solution the state previously used on the shirt which turned it black.

The motion claims that Bevel’s opinion in this regard was based on an “at-home ‘science fair’ experiment” that was conducted in the former police officer’s “garage or kitchen or wherever.”

The motion also suggests that when the state’s lead attorney in the case, Creighton Waters, learned of Bevel’s alleged non-laboratory tests, he was “embarrassed.”

Those alleged at-home tests, the defense motion says, would not stand up to scientific scrutiny and would likely result in Bevel being eliminated as an expert witness. Hearings on potential experts are typically mandatory so that both sides can establish and challenge credentials.

“Bevel is a retired Oklahoma City police officer with no credentials in any scientific discipline,” the filing says.

The filing also argues that Waters is aware the state’s first blood spatter witness is unlikely to be able to testify and that the prosecutor is now trying to “sneak” Bevel’s report in through a member of law enforcement “as a back door.”

“The court should not allow this,” the motion says.

Waters did not immediately respond to a request for comment.