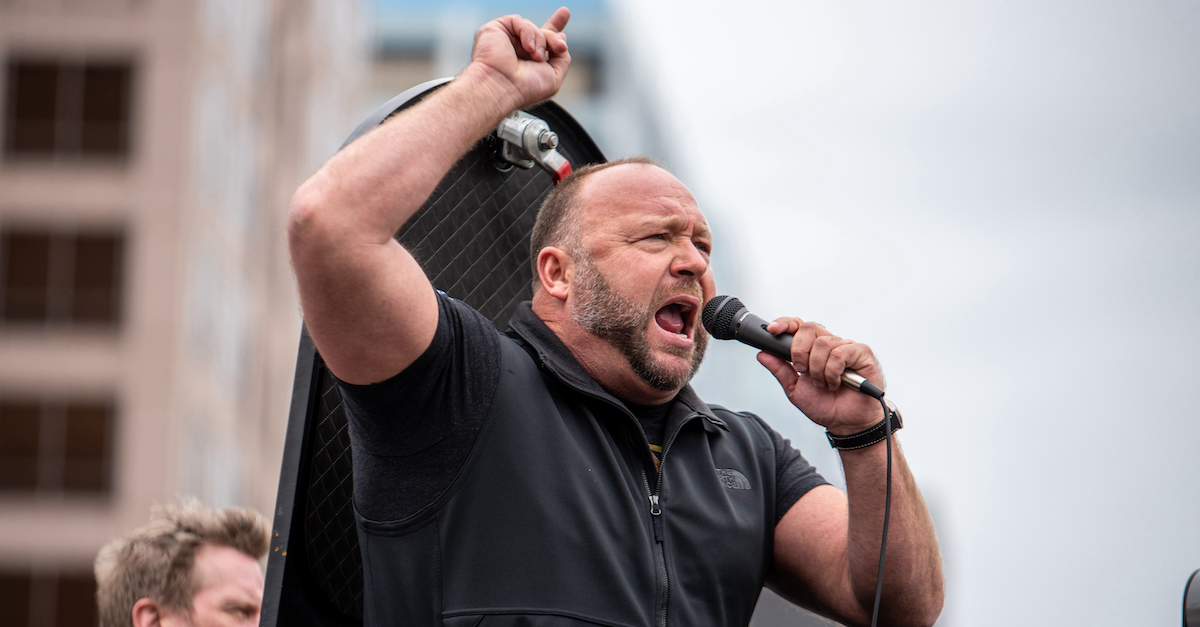 The parents of a 6-year-old boy killed during the Sandy Hook massacre retained private security to protect themselves from Alex Jones followers who believed that their late son was a child actor, a forensic psychologist testified on Monday.

The testimony fell shortly after a federal bankruptcy judge in Texas lifted an automatic stay on the damages trial, triggered by the right-wing broadcaster’s filing of his petition for Chapter 11 reorganization for Free Speech Systems LLC, the company behind Infowars.

The trial in the Texas capital of Austin was filed by Neil Heslin and Scarlett Lewis, the parents of Jesse Lewis, who died at the age of six.

Their lawyer Bill Ogden asked the family’s forensic psychologist Roy Lubit about the measures the parents took to protect their safety. Lubit said that the parents would have hired security detail at all times if they could afford it — and have done so during the pendency of this case.

“They are very, very frightened of someone, some follower of Jones, trying to kill them,” Lubit testified.

Asked whether that belief was unreasonable, Lubit replied: “No, it’s not unreasonable. I think it’s— there’s a real threat.”

According to the testimony, both of the parents sought mental health treatment and have reported unique mental health concerns stemming from Sandy Hook conspiracy theories. The parents estimate that those theories have been embraced by 75 million people, and Lubit noted that — given the current U.S. population 329.5 million people — it would make the family reasonably view a possible threat from roughly one in every four people.

“Feeling that 75 million — one in four — people anywhere in this country you go, is going to reject you, think poorly of you, despise you, could well hassle you, verbally assault you or physically assault you” compounds their stress, the psychologist added.

For the parents, the damage of Sandy Hook denialism extends beyond the quantifiable.

“It feels as if his legacy is being destroyed, and we see this with many people,” Lubit said. “Some people set up large foundations. Some people, politicians care about their legacy, what they’ve done. People give huge amounts of money to institutions to put their name on institutions. We’re symbolic creatures, and I think it’s a way of trying to live on past our death.”

Before lunch recess, Jones’s lawyer cross-examined Lubit and tried to play down the 75 million statistic. As the broadcasts are heard globally, the lawyer suggested, the figure would not necessarily represent one in four people in the United States.

Jones’s counsel also attacked Lubit’s neutrality based on his run for Congress on the Democratic ticket in 2018.

Earlier on Monday, U.S. Bankruptcy Judge Christopher Lopez agreed to allow the ongoing damages trial against Jones to continue in Texas. Attorney R.J. Shannon, who represented Jone’s LLC, did not oppose allowing the trial to proceed because he believed it would reach a speedy resolution.

“The trial court will be able to liquidate that claim very quickly,” Shannon said. “It could be as early as the end of this week.”

Other Sandy Hook families seeking damages in Connecticut also want to lift the automatic stay on their litigation before their trial begins on Sept. 6. Those families have described Jones’ bankruptcy litigation as “bad faith” attempts to abuse the judicial process.

Attorney Avi Moshenberg, who represents the Texas plaintiffs, said in the bankruptcy proceedings that there are “lots of red flags” circling around Jones’s petition.

Moshenberg alleged that the bankruptcy filing shows that the financials confirm “fraudulent transfers.”

Follow-up bankruptcy proceedings have been scheduled for Aug. 3 at 10 p.m. Central Daylight Time. There will also be a separate hearing on Aug. 5 at 10 a.m. CDT, over the motion to dissolve the stay for the Connecticut proceedings.