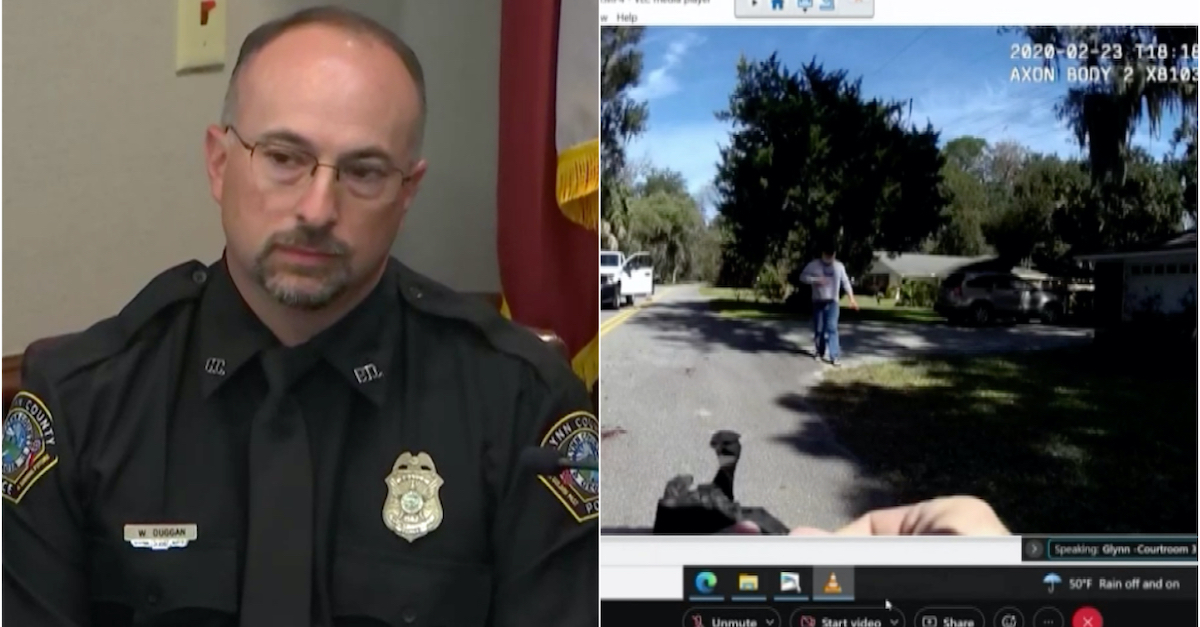 On the day of Ahmaud Arbery’s death, a Glynn County patrol officer reported to the scene and activated his body-worn camera. Entered into evidence on the first day of the trial for the debut witness, the footage showed Arbery’s lifeless and bloodied body in the middle of the street and his accused murderer in the background.

Officer William Duggan recounted for the jury on Friday the conversation he had in the immediate aftermath of the shooting with accused murderer Travis McMichael.

“I didn’t know who he was at the time. I could see he was covered in blood. There was blood all over, and I remember at some point asking if he was okay,” Duggan said on the witness stand.

Before Duggan became the trial’s first witness, the state and two sets of defense attorneys completed opening statements with sharply divergent presentations about what happened before the killing on Feb. 23, 2020. Assistant District Attorney Linda Dunikoski described the case as one about “assumptions and driveway decisions,” and Travis McMichael’s defense lawyer Bob Rubin tried to recast it as about his “duty and responsibility” to protect the neighborhood in Brunswick, Ga.

Judge Timothy Walmsley cautioned those in the gallery that witness testimony would begin with the gruesome recordings of Duggan’s body camera, advising anyone who might audibly react to leave the courtroom to avoid a “distraction.” The defense unsuccessfully tried to prevent the state from entering footage into evidence, a ruling that the prosecution argued was crucial for their case.

“The body-cam video, without sound in the first 30 seconds, shows Duggan interacting with and speaking to Defendant Travis McMichael,” prosecutors wrote in an October memo. “This is important since it is believed that this is when Travis McMichael stated to Officer Duggan that he had shot the victim.”

As the footage of Arbery in a pool of blood was displayed, one juror reportedly shielded herself with her notebook, unable to watch it.

Arbery’s mother Wanda Cooper Jones told a local CBS affiliate why she decided to stay in the courtroom as it played.

“I decided to remain in so that I could get familiar with what happened to Ahmaud in the last minutes of his life,” she told WGCL-TV. “I avoided video for the last 18 months. I was glad I was able to stay strong.”

Earlier during the prosecution’s examination, Duggan was asked about the neighborhood where Arbery was killed: Baker 9, which usually had only one officer patrolling, “unless there’s an overlapping shift,” according to the testimony.

The concession appeared to undercut the defense that Arbery’s accused murderers—McMichael, his father Greg McMichael, and William “Roddie” Bryan—had been responding to a spike in crime. On cross-examination, Duggan noted that the neighborhood also is not densely populated. The officer also agreed with the defense that Travis McMichael appeared to be acting like someone who had accidentally run over a child.