‘I Shot Him’: Accused Murderer Travis McMichael Portrays Ahmaud Arbery as the Aggressor on Witness Stand 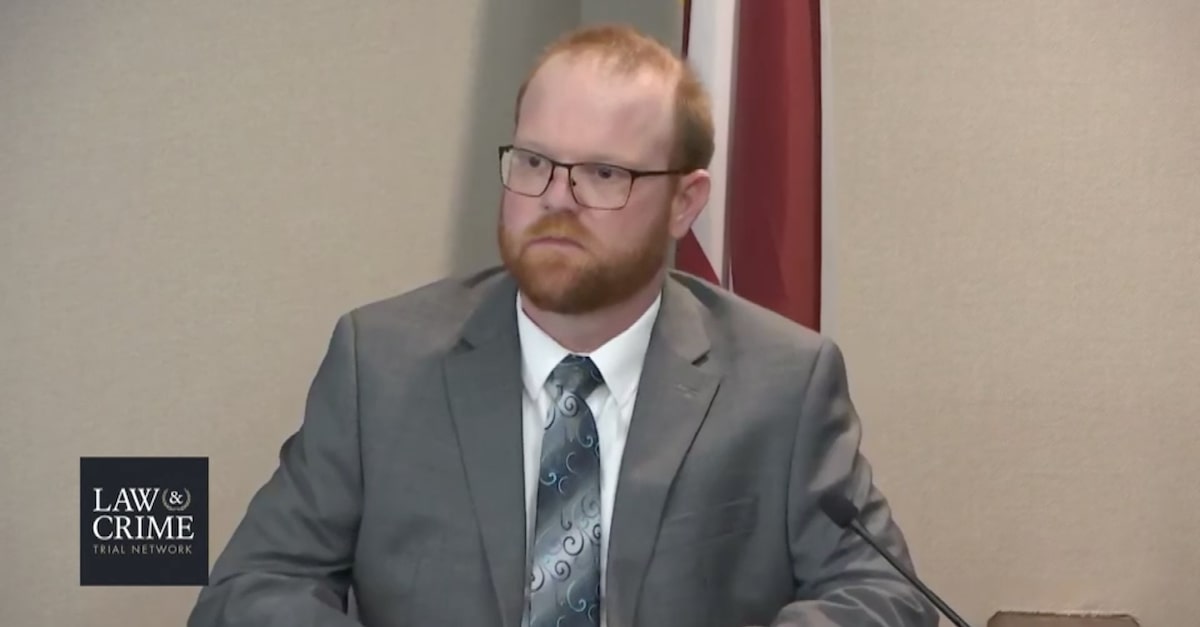 The man who killed Ahmaud Arbery said “I shot him” while taking the witness stand in his defense against murder charges on Wednesday, portraying Arbery as the aggressor as his voice wavered while narrating the 25-year-old Black man’s death.

“He grabs the shotgun and I believe that I was struck on that first instance where we made contact,” Travis McMichael claimed on the witness stand, referring to his account of his confrontation with Arbery.

“What were you thinking at that moment?” his attorney Jason Sheffield asked him.

“I was thinking about my son,” responded McMichael, sounding emotional.

During cross-examination, Cobb County Assistant District Attorney Linda Dunikoski pressed McMichael about apparent inconsistencies in his testimony. The prosecutor got McMichael to concede that he did not state his intention to effectuate a citizen’s arrest on Arbery until his attorney prompted him and that the only reports he heard of crime in the neighborhood came from rumor on social media.

“I’m Pretty Sure That He Is Going to Attack”

When opening statements began on Nov. 5, Travis McMichael’s lawyer Bob Rubin told a jury that his client acted out of “duty and responsibility” when he shot Arbery to death on Feb. 23, 2020. It is undisputed that an armed Travis McMichael was waiting in the street with his father when he gunned down an unarmed Arbery on that day after seeing him running in Brunswick, Ga., but McMichael has maintained that he acted in self-defense.

“I’m pretty sure that he is going to attack,” McMichael said on the stand, claiming Arbery was “running directly at me.”

Being prosecuted together with his father Greg McMichael and William “Roddie” Bryan, Travis McMichael and his defense attorneys claim the trio tried to protect the Satilla Drive property of homeowner Larry English, who installed more than a dozen cameras throughout his under-construction home after experiencing a theft on a boat that was outside. Prosecutors spent the better part of two weeks undermining that defense. English previously testified that he never authorized the McMichaels and Bryan to confront anyone at his construction site. Neither did the Glynn County Police Department, an officer told a jury during the prosecution’s case.

As the defense case began Wednesday, Travis McMichael characterized his conduct as a legitimate law enforcement action in keeping with his training in the U.S. Coast Guard, where he trained and served. His defense attorney asked his client questions about that experience, asking him to unpack acronyms like SEASII (short for Search, Examinations, Arrest, Seize, Inspect, and Inquire) and LEAP (Listen, Empathize, Ask Questions, Paraphrase).

Prosecutor Dunikoski quizzed McMichael on his training glossed over during direct examination. Though McMichael described it as suspicious that Arbery would not talk to him, Dunikoski noted that he was taught about the right to remain silent.

“You learned in the military that you cannot force someone to speak with you?” she asked.

“In fact, you’re trained that brandishing a weapon could be deemed psychological coercion, right?” she pressed, a proposition about which McMichael also agreed.

Travis McMichael also recited his understanding about the standard for reasonable suspicion: “The level of suspicion by a reasonable and prudent person given the overall circumstances to believe a crime has been committed.”

The 35-year-old accused murderer claims that this standard was met by Arbery being spotted at English’s construction site—both on the surveillance footage and in person on the date of his death. The property did not have any “No Trespassing” signs, and English testified that it was “common” and “normal” for people to walk in and out of the site. Arbery’s mother said her son was an avid jogger, whose shoes had been worn out of their tread.

Even McMichael recognized Arbery’s fitness on the witness stand.

“He’s athletic,” McMichael testified, commenting on his speed and long strides on the day of the shooting. “He was in great shape.”

Travis McMichael testified that he first learned about thefts in the area of Satilla Drive from his mother, who read about it on Facebook. He later learned that English’s belongings were stolen from his boat, and McMichael also had a pistol stolen from his truck. There has been no evidence presented connecting Arbery to either crime.

Though Arbery was spotted inside the construction site, presence inside a property only qualifies as criminal trespass under Georgia law if there is evidence of an “unlawful purpose” or a “No Trespassing” sign.

On the night of Feb. 11, 2020, McMichael reported a “burglary” at the construction site, where he told an operator that he saw a “Black male, red shirt, white shorts” inside the building.

“I was still scared,” McMichael said, reflecting on his voice while that call played in court. “I was breathing heavy.”

McMichael claimed that the unidentified man appeared to reach for a weapon.

Some 12 days later, an unarmed Arbery was seen at the house, and McMichael testified that he thought it was the “same guy.” Travis McMichael claimed that his father, Greg McMichael, appeared “frantic” and told him: “Travis, the guy who’s been been breaking in just ran down the road.’”

Checking to see whether that was true, the younger McMichael claimed, he grabbed the shotgun and ran out through kitchen door to the driveway in the direction of the truck.

McMichael said that when he started to pursue the running man in his vehicle: “I realize that it is him. It’s the same guy that I saw on the 11th.”

Narrating the subsequent chase, McMichael said: “I yell at him, ‘Stop! Stop where you’re at!'”

Despite claiming that he tried to “de-escalate” the situation, McMichael said that he asked Arbery to “please” stop to find out “what’s going on” in as much of a “non-volatile” manner as possible. He depicted Arbery as being “angry,” seeming to have “clenched teeth” and a “closed brow, which makes me think something’s happened.”

“As soon I told him, ‘the police are on the way,’ he sprinted down,” McMichael testified.

Seeking to undermine McMichael’s testimony that he would not chase someone he someone who is armed, Dunikoski pressed the defendant to agree that he had no right to pursue Arbery the moment the 25-year-old ran away from him. She also grilled McMichael about his training about the “deadly force triangle.”

Specifically, she told him that deadly force is only supposed to be used as a “last resort.”

Update—Nov. 17 at 5:08 p.m. Eastern Time: This story has been updated to include more details from McMichael’s cross-examination.