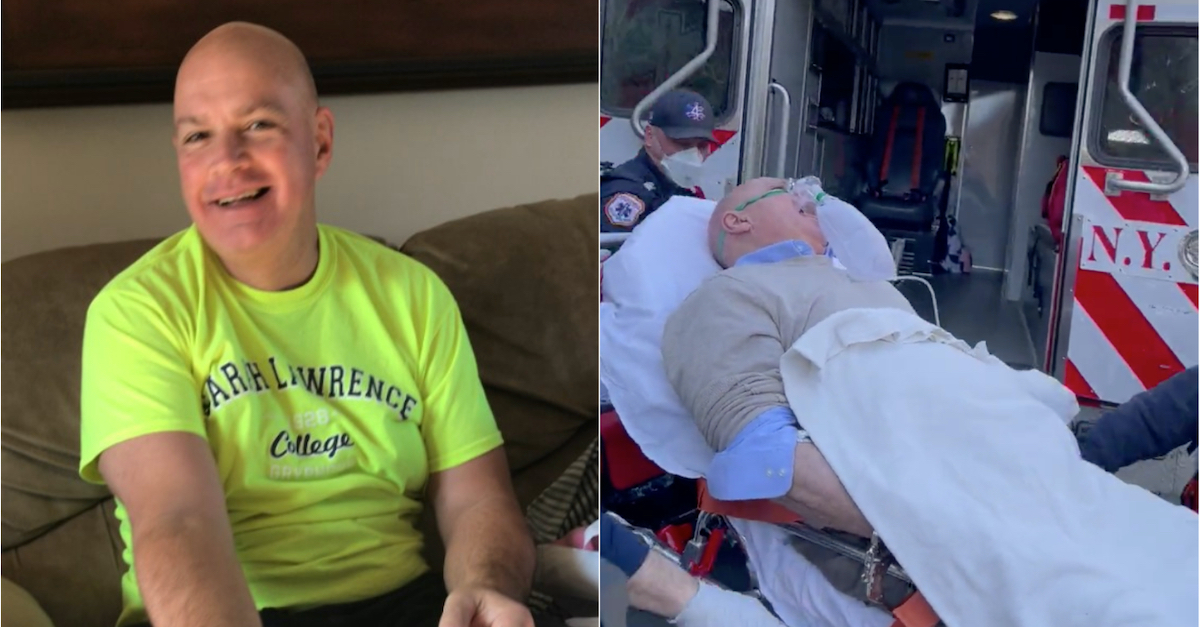 The father who extorted and abused his daughter’s friends at Sarah Lawrence College was whisked out of the courtroom to an ambulance on two separate days during his sex trafficking trial. Newly unsealed records show that now-convicted racketeer Larry Ray had a long history of mysterious courtroom illness.

The most recent time this occurred, one of Ray’s victims told prosecutors Ray once “feigned medical symptoms” to make it appear as if he had a seizure, those filings revealed on Friday.

That allegation appeared in notes from the prosecution’s interview with Ray’s so-called “wife” Felicia Rosario on March 22, 2022, the second day the defendant was wheeled out of his racketeering trial to an ambulance.

“[F]eigned medical symptoms on one occasion,” the government’s notes of the interview read. “Contorted his face to look like a seizure, sort of like a joker.”

Notes from the government’s interview with Felicia Rosario on the second day Larry Ray had to be whisked out of court into an ambulance.

Ray’s first purported medical episode at trial occurred on March 15, during testimony by a paralegal for the Manhattan U.S. Attorney’s office that prosecuted him. His defense attorneys claimed at that time that he had a seizure.

His sex trafficking victim Claudia Drury had been testifying during the second event exactly one week later. Drury had testified that she made $2.5 million for Ray over the course of four years. During that time, she said, she worked seven days a week, saw up to five men a day and took no breaks, even over holidays and her birthday.

After both incidents, reporters captured photographs and footage of medical workers rushing Ray out of Daniel Patrick Moynihan Courthouse in lower Manhattan in a stretcher and into an ambulance. Both times, Ray wore an oxygen mask and did not appear to be conscious. The doctors’ findings surrounding both incidents have been under wraps since that time, even though trial ended with his convictions on all 15 counts against him more than a month ago on April 6.

On Thursday, U.S. District Judge Lewis Liman ordered prosecutors and defense attorneys to place some of his medical information on the public docket. The list of unsealed exhibits to a newly public government filing show that Ray has a history of turning up ill at court proceedings.

On Nov. 5, 2012, Ray had been testifying in the case against brothers Frank and Peter DiTommaso, who were charged with perjury for allegedly lying to a grand jury about lavish renovations they made to ex-New York City Police Department chief Bernie Kerik. One of the brothers was convicted, the other acquitted.

Ray—a key witness in a corruption trial against Kerik, his once-close friend—had cooperated with the government to get a break on his own federal securities fraud charges, but the just-unsealed records showed that Ray blamed his “brain fog” and “liver disorder” on his decision to plead guilty in December 2001.

“At the time earlier I did, and then basically what ended up happening is I ended up getting treated for ADHD subsequent to that which I do have and, you know, from what I’ve been told, it’s like it could happen when you’re under stress or not, but it was more something that it was a suggestion by the attorneys,” Ray testified in 2012.

Other transcripts in the same case indicate that Ray’s testimony came after two false starts the previous month.

Ray’s purported sinus infection, flu and fever prevented him from testifying again on Oct. 24 and Nov. 5, 2012, the transcript shows.

Years later, Ray had been scheduled for a deposition in another case involving DiTommaso, but his attorney had to send her regrets.

By March 27, 2019, Ray still had not testified and his opposing counsel threw down the gauntlet: If Ray did not appear for a deposition with an “absolute date certain” the next week—and produce discovery that included medical records—the lawyer would move to compel the deposition or dismiss the action.

“Unfortunately, I have no update on our end so I guess you will have to file the motion,” Conroy responded a day later. “Our apologies.”

The unsealed files represent exhibits to government filings that have not yet become public. By press time, prosecutors had not publicly accused Ray of malingering, and defense attorneys had not made any public remarks about his medical conditions.

Though Ray claimed to be frequently sick before testimony and other court proceedings, he depicted himself as a military-trained picture of health to his victims.

As their sophomore year was about to start in September 2010, Sarah Lawrence students living in the dorm Slonim Woods 9 learned from one of their roommates, Talia Ray, that her father was getting out of prison. Larry Ray became a fixture in that communal dorm, reportedly sleeping in the room of his daughter’s friend Isabella Pollok. Prosecutors say that the father physically, emotionally, sexually and financially abused the students, with Pollok as his alleged co-conspirator and lieutenant.

Ray’s victims testified that he would force them to falsely confess to poisoning him and damaging his property, racking up enormous debts that he would enforce through brutality and intimidation. Santos Rosario, who was Talia Ray’s ex-boyfriend, said that he and his sisters paid them $150,000 in such purported debts. One of those sisters, Felicia Rosario, was not a Sarah Lawrence student, but a Harvard and Columbia University-trained doctor who became known as Ray’s wife. The sibling’s mother Maritza Rosario corroborated their testimony, saying that Ray estranged her from her children for years.

Pollok, who has pleaded not guilty, will be standing trial in July.

Ray is scheduled to be sentenced on Sept. 16.

Read the filings, below:

(Photo on left via DOJ; image on right via Law&Crime’s Adam Klasfeld)