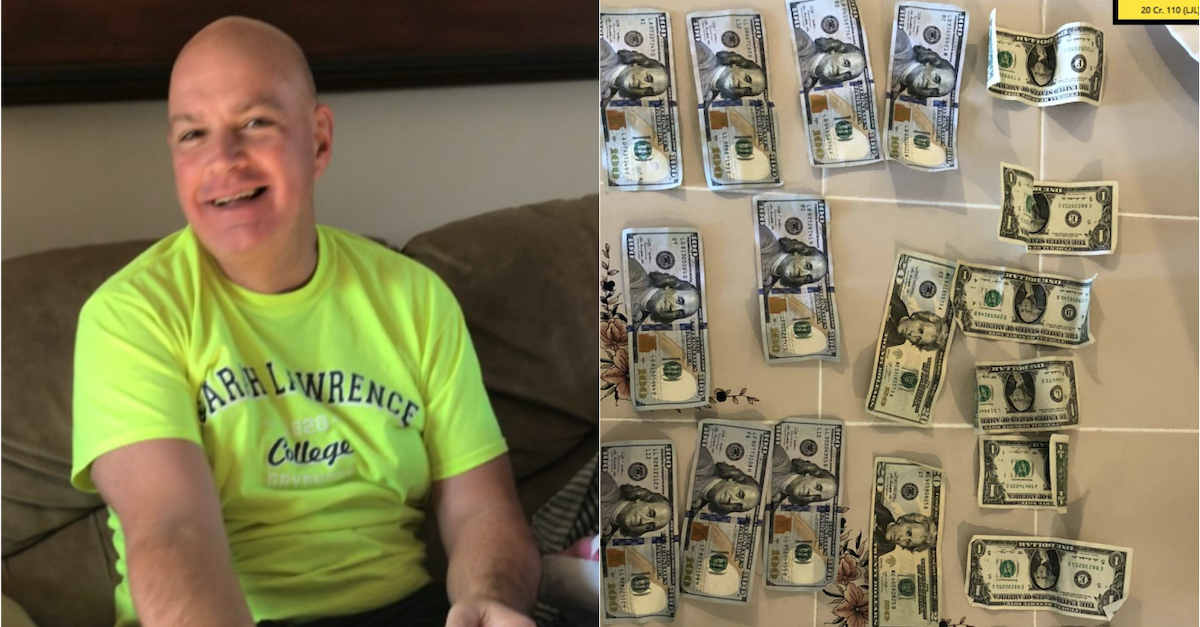 Larry Ray wears a Sarah Lawrence College T-shirt on the left. On the right, cash is set on a table in a government exhibit.

The verdict came hours after deliberations officially started at 9:30 a.m. on Wednesday. The jury was sworn in following instructions by U.S. District Judge Lewis Liman on Tuesday afternoon.

Before trial began, Ray was charged with a 17-count superseding indictment. It was reduced to 15 charges by the end of trial, with one tax evasion and another interstate commerce count nixed for technical reasons. The judge had Ray face the jury as their verdict was recited: guilty on every single charge.

“Twelve years ago, Larry Ray moved into his daughter’s dorm room at Sarah Lawrence college. And when he got there, he met a group of friends who had their whole lives ahead of them,” Williams said in a statement. “For the next decade, he used violence, threats, and psychological abuse to try to control and destroy their lives. He exploited them. He terrorized them. He tortured them. Let me be very clear. Larry Ray is a predator. An evil man who did evil things. Today’s verdict finally brings him to justice.”

In 2010, Ray got out of jail and inserted himself into the lives of students in the dorm where his daughter Talia Ray lived. Father and daughter regaled the students with tales about how Larry Ray mingled with the likes of former Russian president Mikhail Gorbachev, ex-New York City Police chief Bernie Kerik, and military generals. Prosecutors say that Ray gained the students’ trust before grooming them for horrendous abuse that is the “stuff of nightmares.”

The sex trafficking count stemmed from his exploitation of Claudia Drury, a one-time math whiz who testified that she became a prostitute at his urging. Jurors saw multiple videos of Ray interrogating Drury and other students until they confessed to a variety of offenses. Ray persuaded Drury that she had poisoned him, and she testified that she paid him $2.5 million in sex work earnings as compensation.

Defending himself against such allegations, Ray did not dispute that he received large sums of money from Drury, which witnesses traced through elaborate financial transactions to his account with the domain name website GoDaddy.com. Those transactions formed the basis of his money laundering count. Instead, Ray argued that a lawyer advised him he could receive prostitution money from Drury as “compensation” for his supposed poisoning by her. That lawyer acknowledged that he gave that advice in testifying for the defense.

Though only Drury’s testimony formed the basis of the sex trafficking count, a parade of witnesses told similar accounts of extreme abuse by Ray. Three siblings took the stand against Ray—Santos, Felicia, and Yalitza Rosario—and prosecutors said that all three attempted suicide during the time of their association. Though they were never married, Felicia Rosario called Ray her husband, and he called her his wife. Ray nonetheless allegedly goaded her constantly to have sex with strange men and film it, forming the basis of one forced labor account. When staying in Ray’s New York City apartment, Felicia Rosario said that Ray had her proposition the doorman, who corroborated her account. Both said that the doorman turned down the request to have sex in a car.

Mother Maritza Rosario said she did not see her children for several years, and her son Santos was always asking her for money, which he testified was for his supposed debts to Ray.

The 62-year-old could face up to life imprisonment at his sentencing on Sept. 16 at 2 p.m. Eastern Time.

A sex #cult on a major American college campus, that's what prosecutors say went on for 10 years, started by a father of a student. The jury now has the fate of Lawrence Ray in its hands. @danabrams breaks down the case. pic.twitter.com/KyygeJJBER