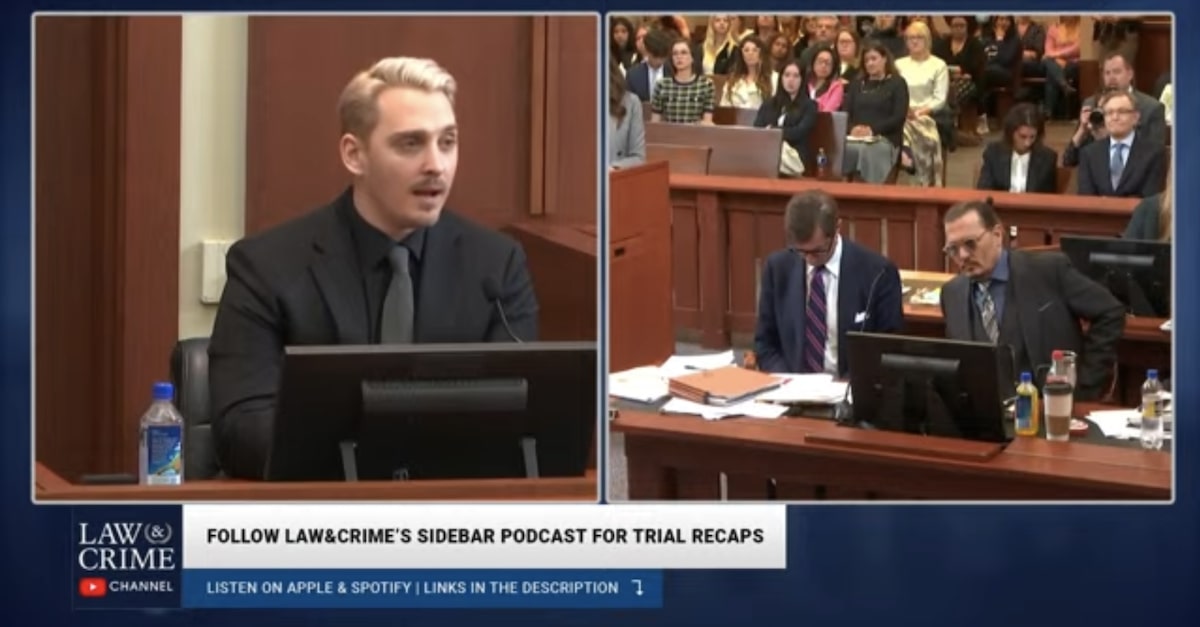 Ex-TMZ employee Morgan Tremaine testifies about the source of an exclusive video in the Johnny Depp defamation case.

When TMZ exclusively received a leaked video of Johnny Depp appearing to slam kitchen cabinets in anger, the footage left out some key context seen by a Virginia jury: Amber Heard “seemingly snickering” toward the end of the tape, the celebrity tabloid’s former staffer testified on Wednesday.

Last month during the ex-couple’s trial, a jury saw footage of Depp appears angry in their West Hollywood home, and Heard tapes him.

“We’re not even fighting this morning,” Heard said in the clip, while taping him. “All I did was say sorry,”

“Did something happen to you this morning?” Depp yells I don’t think so! You wanna see crazy? I’ll give you f***ing crazy.”

Morgan Tremaine, who took the witness stand over his former employer’s objections, said that the ending of the tape played in court looked different than the one that came in via TMZ’s email tip line.

“When I had clicked the direct link that we received and watched the video in its entirety. It was much shorter than the video we had received— the video that’s been played in this trial,” Tremaine testified. “There was some a bit at the beginning that was played here in which Ms. Heard is seemingly sort of setting up the camera and getting into position. And then, there’s a bit at the end, where she seemingly snickering and looks at the camera. That part was not present in what we received.”

A former field assignment manager, Tremaine testified that news producers instructed him to tell paparazzi to go to the Los Angeles courthouse on May 27, 2016—the day Heard filed a restraining order—and capture a bruise on Heard’s right cheek.

Tremaine said he received a similar instruction months later on Aug. 6, when he dispatched paparazzi to Heard’s law firm. The exclusive video at the heart of his testimony came in roughly six days later on Aug. 12, he said.

During the lunch recess, TMZ’s lawyers unsuccessfully fought to keep Tremaine from taking the stand. Their emergency motion to intervene suggested that they feared Tremaine would burn their source, even though he did not know who leaked it.

Tremaine testifes the video of #JohnnyDepp slamming the kitchen cabinets TMZ recd was shorter than the one played in trial. He said the beginning where #AmberHeard sets up the camera and the end where “she seemingly snickering and looks at the camera” was not in the one we recd. pic.twitter.com/PcnZW5KYxw

But TMZ’s attorney noted that that same First Amendment principles of journalism ethics and privilege apply.

Just as TMZ asserted, Tremaine testified that he did not know the source of the video transferred through the organization’s email tip line. Heard’s attorney Elaine Bredehoft suggested that Tremaine took the stand in an effort to ride on the massive exposure of a trial broadcast to hundreds of millions of people internationally.

“This gets you your 15 minutes of fame, doesn’t it?” Bredehoft asked.

“I stand to gain nothing from this,” Tremaine said, adding that he makes himself a target of TMZ.

Judge Penney Azcarate stated in her ruling that TMZ could choose to litigate any alleged breach of a non-disclosure agreement that might apply.