Why Trump’s Transgender Military Ban is Destined to Fail 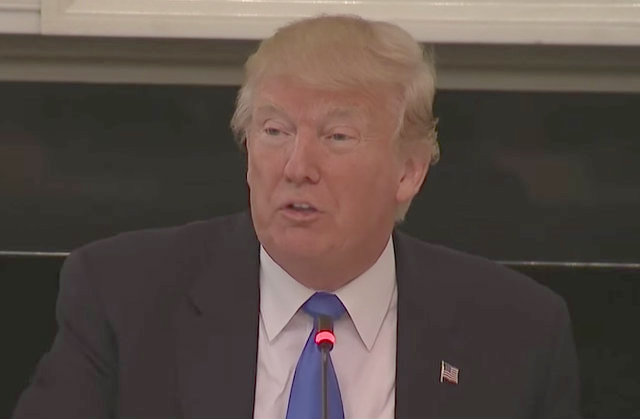 President Donald Trump has said that he will no longer allow transgender people to serve in the U.S. military.

Trump outlined the major policy shift in a series of tweets Wednesday morning. According to the president, he made the decision after consulting with political advisors and military brass.

First of all, this is a series of tweets, which for now have to be taken at face value in the absence of something a bit more official. They are an expression of policy preferences for the leader of the nation but they are not legislation. Trump’s stated goals here certainly lay bare the opposition to transgender people often associated with conservatives, but tweets are not an agency regulation or order. If Trump is serious about this–and there’s no indication he’s not–he will eventually need to issue a Defense Directive.

Let’s operate on the assumption that whatever Defense Directive Trump’s administration puts forward will keep the above-tweeted justifications intact. Attributing the rationale behind the ban to (1) “the tremendous medical costs”; and (2) “disruption” associated with allowing transgender personnel to serve in the military would likely keep the proposed ban on somewhat solid legal footing–at least for awhile. This is because the president has outlined what some courts–but not all–would probably term a policy entitled to rational basis review for the policy change. Basically, because Trump’s justifications here can be construed as “rationally related” to a “legitimate government interest,” which is not aimed at a constitutionally-protected “suspect” or “quasi-suspect” class, and because there’s nothing indicating outright transphobic bigotry, some courts would likely give Trump the benefit of the doubt here.

Some, but not all. A few federal courts have found that the Constitutions’s Equal Protection Clause (outlined in the 14th Amendment) bars the government from discrimination on the basis of a person’s transgender status. That court found “discrimination against a transgender individual because of her gender nonconformity is sex discrimination, whether it’s described as being on the basis of sex or gender.” As the Supreme Court has yet to address the issue, however, the law here is still undergoing evolution.

Other areas of federal law likely implicated by Trump’s proposed ban are Title VII and Title IX–which prohibit discrimination on the basis of sex. But if and when Trump’s transgender ban is challenged in courts–and if it is challenged successfully–it will likely be on the basis of the Equal Protection Clause in tandem with Substantive Due Process (drawn from the 5th and 14th Amendments).

“The Constitution promises liberty to all within its reach, a liberty that includes certain specific rights that allow persons, within a lawful realm, to define and express their identity.”

This is powerful language and very likely to be instructive in the ultimate adjudication of transgender rights in the United States. Justice Kennedy thoroughly interwove the concepts of equal protection and substantive due process together in such a way that it’s more or less obvious where jurisprudence on transgender rights is heading generally. Ultimately, as Don’t Ask, Don’t Tell before, Trump’s attack on transgender people is destined to fail.

Until the Supreme Court weighs in, however, Trump and the GOP will almost certainly continue to eviscerate transgender rights at will. The guiding principle of Trump and the GOP is to undo anything and everything achieved under the Barack Obama administration. On that front, rescinding the Obama-era policy on transgender bathroom use is a win–the millions of children impacted don’t matter. Here, Trump can quickly claim victory and move on as well. The estimated 15,000 transgender people presently serving in the Department of Defense is immaterial to Trump and the GOP. Their fate, in light of this drastic policy shift, however remains entirely unclear.