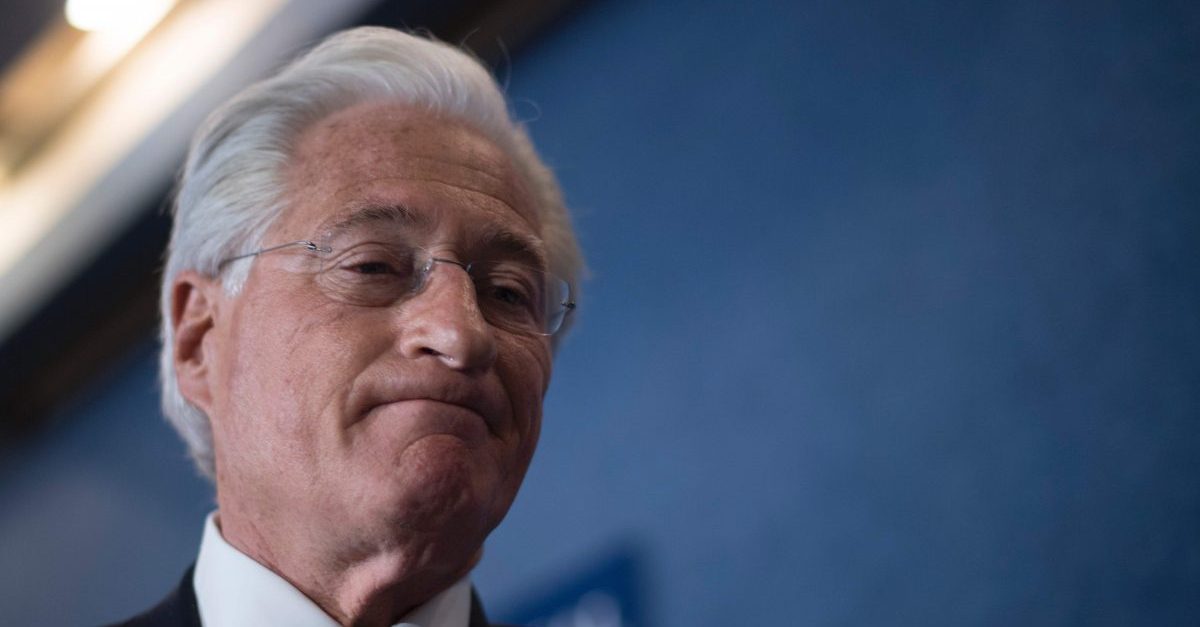 Oral arguments were held in front of a panel of the New York Supreme Court’s Appellate Division on Thursday in Summer Zervos‘ defamation case against President Donald Trump. Zervos sued Trump for calling the former Apprentice contestant’s sexual assault allegation a lie that was politically motivated.

Trump’s attorney Marc Kasowitz has been arguing that the lawsuit shouldn’t be allowed to go forward while Trump is in office. While the Supreme Court ruled in Clinton v. Jones that federal courts have the discretion to allow sitting presidents to face litigation while in office, Kasowitz has argued that state courts do not have the authority to hear cases against a sitting president.

Kasowitz ran into trouble when the panel pressed him on why.

“Where does it end?” Judge Angela Mazzarelli asked, inquiring if this means that all federal officials have immunity in state court. Kasowitz said it’s just the president, which again raised the question: Why?

Kasowitz relied on the combination of the Articles 2 and 6 of the Constitution. Article 6, Clause 2, commonly known as the Supremacy Clause, states that the Constitution is the “supreme law of the land,” and that “judges in every state shall be bound thereby.” He used this in conjunction with Article 2, which states that the executive power is vested in the President of the United States. Kasowitz stated that this power of the president “must be always in function.”

There was just one big problem with this, and the panel was all over it. How can you argue that a state court can’t hear an action against the president because the presidency must always be in function, when the Supreme Court already ruled that this wasn’t a good enough reason to bar federal cases?

Kasowitz ran around in circles on this one, repeatedly insisting that this case is different because Clinton v. Jones examined separation of powers within the federal government, while Zervos’s case raises a Supremacy Clause issue. Of course, this didn’t answer the question of why a court case can’t interfere with the presidency, when the Supreme Court already said it can. Kasowitz even admitted that if Zervos had brought the same type of claim in federal court, this would not be an issue.

The grilling over this issue took up nearly all of Kasowitz’s time. He didn’t even get a chance to go into his two other arguments. One was that Trump’s statements were non-defamatory political speech, and the other was that the case should fall under California’s anti-SLAPP statute, which prohibits lawsuits against speech that deals with issues of public concern. Trump’s other lawyer, Charles Harder, had success with a similar argument under a Texas statute in the defamation case brought against Trump by Stormy Daniels.

Kasowitz barely said anything about those issues because he was too busy fending off attacks on his first argument.

It looked like Kasowitz was in trouble, but then Zervos’ side went up and the judges made a far better Supremacy Clause argument than Kasowitz did.

Zervos’ lawyer Mariann Wang started off strong, picking on Kasowitz for having “no coherent argument” for why Trump can’t face a state court lawsuit. Then the panel brought up a hypothetical question that Wang couldn’t answer.

If a state judge ordered a deposition of President Trump and he refused to show up, what would happen? Normally, a judge would hold the person in contempt of court, which can be punishable by incarceration. Could a state court incarcerate the president?

Wang tried to shrug this off by saying she doesn’t think this would happen, but the court didn’t back off. Maybe it wouldn’t happen, but theoretically it could. What would happen? Wang had to acknowledge that this was a difficult question, but again said she doesn’t think this case would get to that point. The panel eventually backed off, even though Wang didn’t have a response.

Wang did make some strong points in her argument. She noted that state judges are just as capable as federal judges when it comes to managing a litigation and making sure that it doesn’t interfere with a president’s duties. Therefore, there’s no good reason why federal courts should be allowed to hear cases against a sitting president, but state courts can’t.

Wang also pointed out that Trump has faced three other state court cases while in office, and in none of them did he raise this kind of objection, which makes his argument seem “hollow” now. Kasowitz later pointed out that those other cases were initiated before Trump took office, although that doesn’t necessarily explain why he couldn’t have requested a stay until after his presidency.

After Wang finished her argument, Kasowitz had an opportunity to present his rebuttal, and he immediately latched onto the judges’ hypothetical about contempt.

“What if there’s an order from the state court that the president doesn’t comply with?” he asked, echoing the panel.

Not surprisingly, the judges responded with another question which pointed out that this question isn’t as great as Kasowitz may have hoped: if this was such a clear cut issue, why did the Supreme Court go out of their way to leave the question open?

This is in reference to footnote 13 in Clinton v. Jones, which says:

Because the Supremacy Clause makes federal law “the supreme Law of the Land,” Art. VI, cl. 2, any direct control by a state court over the President, who has principal responsibility to ensure that those laws are “faithfully executed,” Art. II, § 3, may implicate concerns that are quite different from the interbranch separation-of-powers questions addressed here.

That footnote recognizes, as Kasowitz noted, that the separation of powers issue in Clinton v. Jones may be different from the issues in a similar state case. What it does not say, however, is say what the state court issues would be or how they would be resolved. That means, the judge implied, that this is not an open and shut case.

It was not an easy day in court for Kasowitz, but Wang had her difficulties as well, and time will tell how the panel truly feels about this case and whether it should continue. All that today’s hearing did was provide a look at what questions the judges are focusing on, and not necessarily how they would answer them.

Should the case move forward, Zervos will continue to push for additional discovery. Her side has been complaining for months hat Trump and the Trump Organization have not been complying with their requests for documents. The two sides recently reached an agreement that could include sworn written statements from Trump himself.