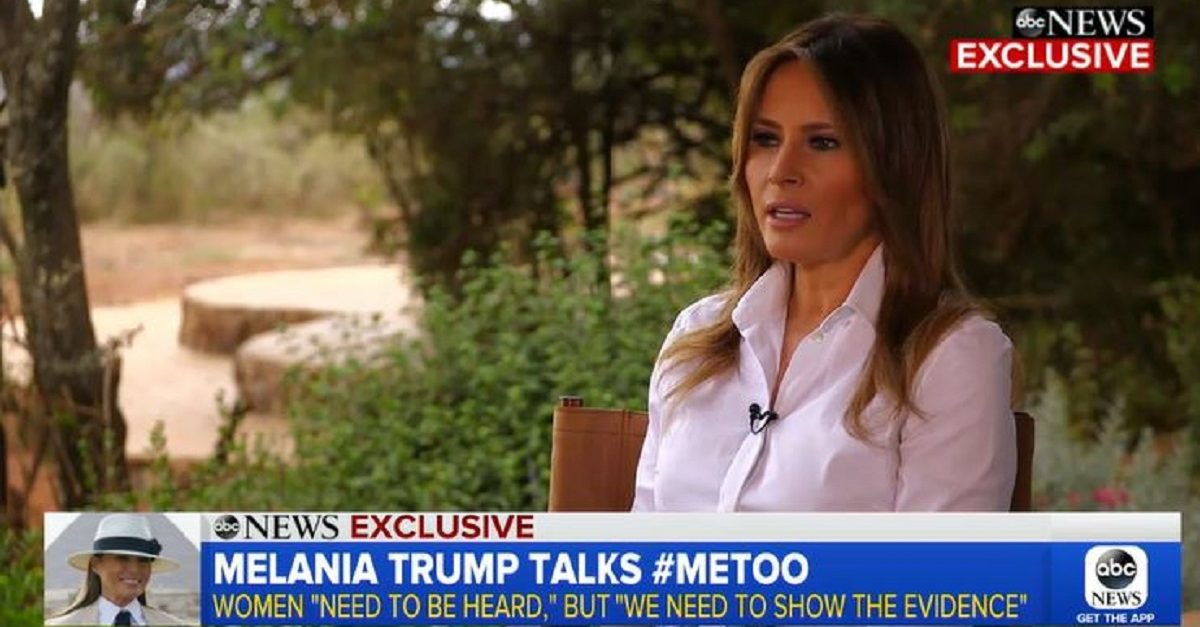 First Lady Melania Trump addressed the #MeToo movement in an interview with ABC News, noting that while she stands with survivors of sexual assault, it takes more than just allegations for claims of abuse to be viewed as credible.

“You need to have really hard evidence,” Trump said. “I do stand with women, but we need to show the evidence.”

CNN Legal Analyst and University of Georgia Law Professor Page Pate took issue with this, stating that allegations are evidence.

“A victim’s testimony is legally sufficient evidence by itself to convict someone of sexual assault,” Pate said in a tweet on Wednesday. “No other evidence is required.”

A victim’s testimony is legally sufficient evidence by itself to convict someone of sexual assault. No other evidence is required. https://t.co/fk12ze2QRo

Trump’s comments come in the wake of the allegations that Supreme Court Justice Brett Kavanaugh tried to sexually assault Dr. Christine Blasey Ford when they were teenagers, and that he exposed himself too Deborah Ramirez in college.  Julie Swetnick also claimed that Kavanaugh, in high school, was involved in parties where girls were gang raped after he allegedly spiked the punch.

Of course, Kavanaugh’s allegations were addressed in the context of a confirmation hearing, where decisions are made by politicians who are not there to determine innocence or guilt, but whether they want a person on the Supreme Court. In a criminal case, jurors evaluate the evidence presented before them to determine whether or not a person is guilty.

That evidence, as Pate said, includes the alleged victim’s own testimony. Even if that’s the only evidence provided, that is legally sufficient to convict someone, if a jury believes that there is no reasonable doubt that the accused person is guilty.

Sen. Jeff Flake made a similar error when he said that corroborating evidence was necessary to support sexual assault allegations. As Law&Crime’s Aaron Keller noted, this is not entirely accurate.

“While a few states require some corroborating evidence in some types of sex offense cases, most do not,” Keller wrote.

At the same time, while allegations alone may be technically sufficient in most cases, they may not be enough evidence to convince a jury of a person’s guilt.

It’s clearly not enough to convince the First Lady, whose husband has been the target of a number of allegations of sexual misconduct. Most of those allegations, however, were not made in the context of sworn testimony, as would be the case in a criminal case, or as Ford did before the Senate Judiciary Committee.