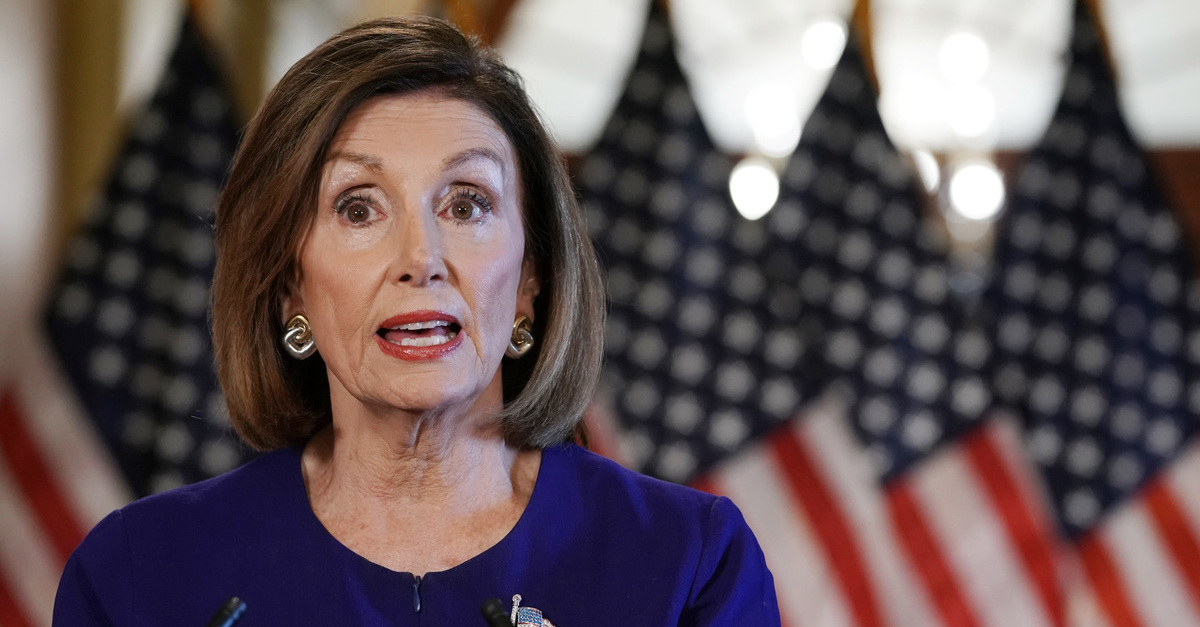 Whether Pelosi’s plans actually amount to the real process of impeachment is currently up for debate. Iowa Law Professor Andy Grewal, for one, skewered today’s announcement–before and after Pelosi intoned with great pathos in front of the nation–in a series of tweets.

He was not alone.

So basically Pelosi made a statement saying the House is going to keep doing what it has been doing. No House resolution authorizing an impeachment inquiry like in Nixon and Clinton. No additional resources. No authority conveyed to Judiciary Committee or select committee.

For more information on this discussion see Law&Crime’s reporting on impeachment confusion here.

The two-sentence version of that debate could be expressed as follows: Impeachment is a distinct process of hearings conducted by the House of Representatives based on articles of impeachment followed by a vote. And that’s not what’s happening here.

Rather, Pelosi has announced an inquiry that brings together six disparate House committees which have already been investigating President Trump for years in the aggregate. Maybe there will be a directive which creates new logos–and possible PowerPoint slides bearing said logos–for the committees’ combined work to reach certain conclusions by a hard deadline or otherwise work harmoniously. Maybe there will be a new select committee on impeachment. But there are currently no details about that.

There aren’t many guidelines Pelosi has to follow–only the U.S. Constitution’s threadbare remarks about the impeachment power solely residing in the House. And regardless of how messy and arguably doomed-to-lead-to-nowhere the six-committee approach would be–the ultimate decision here is hers. That is, it’s entirely up to Pelosi whether the already-in-progress investigatory efforts amount to formal charges of impeachment.

Why so murky and prone to one person’s whims? Because impeachment isn’t quite a legal process so much as it is political.

That is, there’s no real precedent the House of Representatives is bound to respect once the decision to bang that gavel has been made. But assuming arguendo that Pelosi whips the votes for impeachment, the House would likely attempt to ferret out legalistic and precedent-adjacent frameworks and decisions from decades past to bolster their case on either side. During Bill Clinton‘s impeachment contretemps, representatives in Congress did exactly that.

Aside from the oft-repeated accusations of “perjury” regarding the Monica Lewinsky predation, Congressional Republicans treated the impeachment process like the trial of the century. Legal jargon abounded, legal experts were consulted, law degrees and pedigrees were whipped out to bolster credibility. The law loomed large but wasn’t really the point.

To be clear: impeachment is not a strictly legal process–nor is impeachment a completely political animal because we’ve decided as a country the legal gloss is necessary. Impeachment is, to be sure, a function of constitutional powers and prerogatives assigned to Congress and solely to Congress. There’s absolutely no room for the Courts or for judicial review. This process has, in the past, used the imagery of law and court-like procedures for efficiency’s sake and public understanding.

So, how do the nuts and bolts go? It’s fairly simple really:

A member of the House would introduce an impeachment package containing the list of charges or by asking the charges be referred to an appropriate committee. Eventually, the House Judiciary Committee will take the reins and choose whether or not to report the charges to the full House as Articles of Impeachment. After that, House debate and that aforementioned, constitutional process– quasi-legal; quasi-political–ensues. If the House votes to impeach, then it’s the Senate’s turn to consider the charges and vote on the question of presidential removal:

The Senate shall have the sole Power to try all Impeachments. When sitting for that Purpose, they shall be on Oath or Affirmation. When the President of the United States is tried, the Chief Justice shall preside: And no Person shall be convicted without the Concurrence of two thirds of the Members present.

Judgment in Cases of Impeachment shall not extend further than to removal from Office, and disqualification to hold and enjoy any Office of honor, Trust or Profit under the United States; but the Party convicted shall nevertheless be liable and subject to Indictment, Trial, Judgment and Punishment, according to Law.