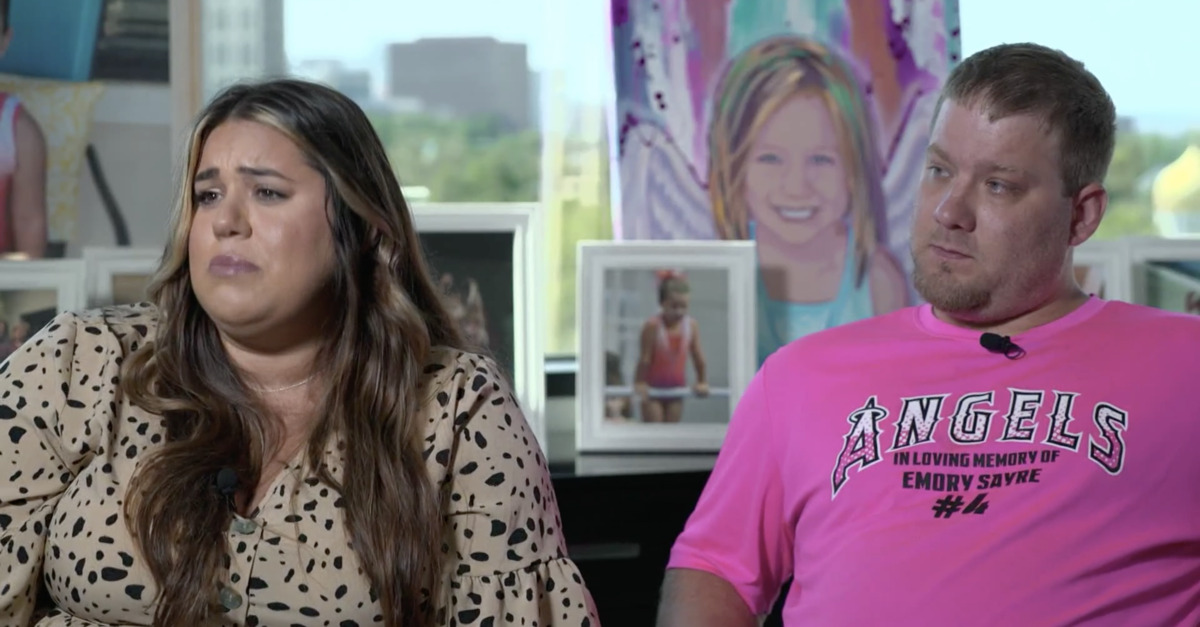 Tori Sayre (L) and Sean Sayre (R) discuss the loss of their daughter, 6-year-old Emory Sayre, who was struck and killed by a school bus on April 25, 2022.

Emory Sayre was only six years old when her own school bus hit her, ran her over, and killed her in the spring of this year in a largely rural area of North Texas. Now, her parents are suing the school district and two companies responsible for the bus in question.

According to a complaint obtained by the Fort Worth Star-Telegram, Sean Tayre and Tori Tayre filed a lawsuit in Dallas County against the Brock Independent School District, bus manufacturer Blue Bird, and the company that sold the bus, Rush Truck Centers of Texas.

Emory Sayre was reportedly the last of three children to exit the school bus at the stop where she was struck, according to the lawsuit. The filing says she fell under the right side of the vehicle and was subsequently run over by the front right and rear right tires.

According to the Dallas Morning News, the Texas Department of Public Safety concluded that the bus stopped to drop off students on Canyon Creek Circle and hit Emory Sayre when it started up again.

The young girl died roughly an hour later at the Medical City hospital in Weatherford, Texas. It was April 25, 2022.

“We are deeply saddened to confirm reports that a student was involved in a school bus accident this afternoon,” Brock ISD said in a Facebook post that late same day. “No other students were injured. We are working through the accident with local law enforcement and school administrators but our focus remains on the healing of one of our own at this time. Please join us by adding this student to your thoughts and prayers.”

According to the filing by Dallas-based attorney Kevin Koudelka, school officials failed to provide a safe environment for Emory Sayre.

In a statement to Law&Crime, Brock ISD Director of Communications John Tarrant said: “We continue to offer our prayers and condolences to Emory’s family. Based on potential legal action the District doesn’t have any further comments at this time.”

Additionally, the lawsuit claims the school district failed to keep the school bus in safe condition, and is also liable for alleged lapses in its driver hiring and training efforts, according to a copy of the complaint obtained by Dallas CBS affiliate WFAA.

The lawsuit is premised on a gross negligence theory of liability; the defendants are being sued in excess of $1 million.

Tori Sayre and Sean Sayre recently spoke to the TV station and relieved the horrors of the day their daughter died.

“His voice was frantic, and he said, ‘Tori, you need to get home, Emmy’s been hit by the bus,’” the grieving mother recalled.

According WFAA, Emory Sayre’s two brothers witnessed the awful incident unfold just in front of their own house.

Tori Sayre rushed to the hospital where her daughter had been air-lifted. And, of course, she heard the worst.

“The doctor came in and he looked at me and he said, ‘I’m sorry, you know, she – she didn’t make it.’ At the time I didn’t have a reaction. I just stood there and looked at him,” Sayre told the TV station. “I sat there for about 30 minutes. Just staring.”

Sean Sayre was out of state on a business trip at the time.

The lawsuit also claims the bus manufacturer and retailer built and sold a bus known to be unsafe because it lacks certain safety features. According the lawsuit, the 2021 model Blue Bird that struck and killed Emory Sayre had no cameras, sensors, or a front crossing arm – though all of those devices have been available options for years.

“Every vehicle on the road today ha[s] very basic safety features that could’ve prevented this,” Koudelka told the TV station. “They shouldn’t be options. It should be standard equipment, like a seat belt.”

Law&Crime reached out to the two other named defendants for comment on this story, but no response was forthcoming at the time of publication.

“You don’t notice how many school buses you see in a day until something like this happens. It’s like they haunt us,” Tori Sayre said.