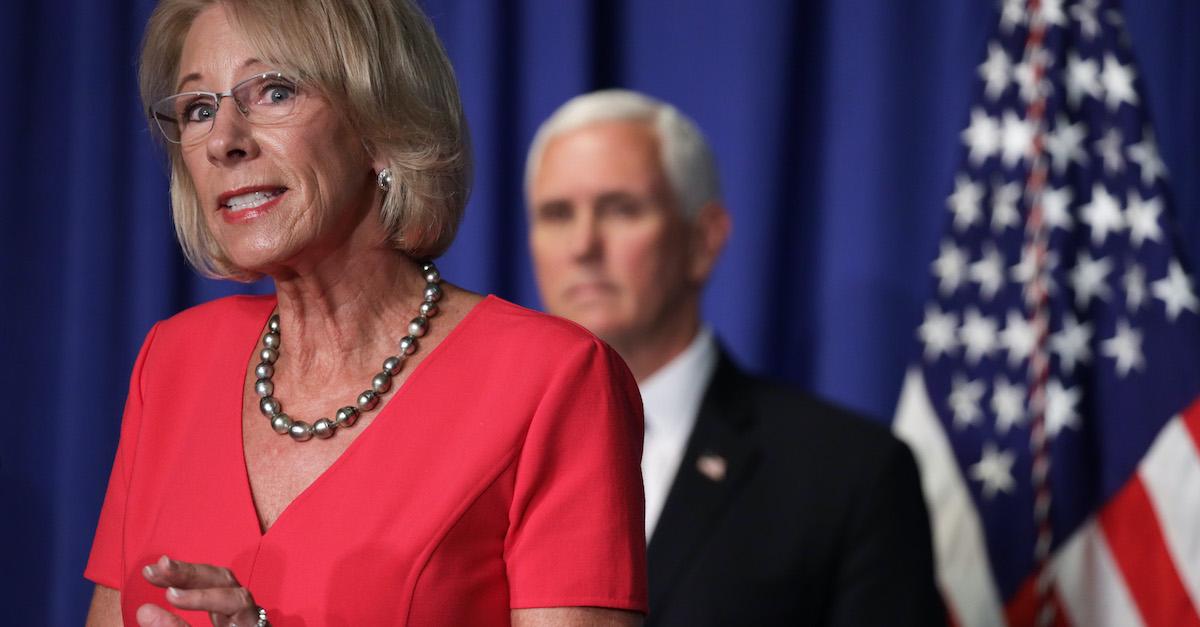 A “coalition” of Democratic state attorneys general filed a lawsuit on Wednesday against Education Secretary Betsy DeVos, asking a federal judge to declare a 2019 Rule issued by the department (ED) “unlawful.”

According to the lawsuit, the Borrower Defense Rule removed “important deterrents to institutional misconduct” and removed legal protections for student-borrowers against potential fraud.

“The 2019 Rule for the first time completely eliminated violations of applicable state consumer protection law as a viable defense to repayment of federal student loans,” the lawsuit said. “In fact, ED eliminated all available defenses, except just one: ‘a misrepresentation … of material fact upon which the borrower reasonably relied in deciding to obtain’ a federal student loan.”

In its effort to protect the for-profit school industry, ED relies on unsupported assumptions, fails to explain ED’s fundamental changes of position, and ignores considerable evidence in the record before ED. These infirmities render the 2019 Rule arbitrary, capricious, an abuse of discretion, or otherwise not in accordance with law in violation of the Administrative Procedure Act (“APA”), 5 U.S.C. § 706(2)(A).

Moreover, the 2019 Rule requires each and every borrower to meet this insurmountable burden on their own. Notwithstanding the fact that borrower defense claims frequently involve common issues of fact, the 2019 Rule arbitrarily eliminates any group discharge process.

In reality, the 2019 Rule eliminates all viable defenses to repayment, contrary to Congress’s mandate to ED. ED does not even fully deny this fact, and states that one of the primary purposes of the 2019 Rule is to diminish successful borrower defense claims even where, as ED concedes, the school has engaged in actionable misconduct.

The plaintiffs claimed that the rule “brims with ill-disguised contempt for struggling students” and is truly intended to benefit the “for-profit school industry” by shielding these institutions from “accountability for their violations of state and federal law.”

The New York State Attorney General’s Office said in a press release that DeVos and the Department of Education have attempted to “repeal critical protections for student-borrowers who have been misled or defrauded by predatory for-profit schools.”

“The repeal of these critical protections for student borrowers is just the latest in the long list of actions the Trump Administration has taken to prioritize profits for predatory schools over the success of our students,” New York State Attorney General Letitia James said in a statement obtained by Law&Crime. “This rule does nothing more than prevent borrowers from obtaining the relief they need, which is why our coalition is fighting this gross injustice and demanding that the Department of Education and Secretary DeVos, for once, stop placing students in harm’s way.”

“Students have a right to a fair, consistent, and transparent process of seeking debt relief, and predatory businesses and institutions have an obligation to bear the cost of their misconduct,” James added.