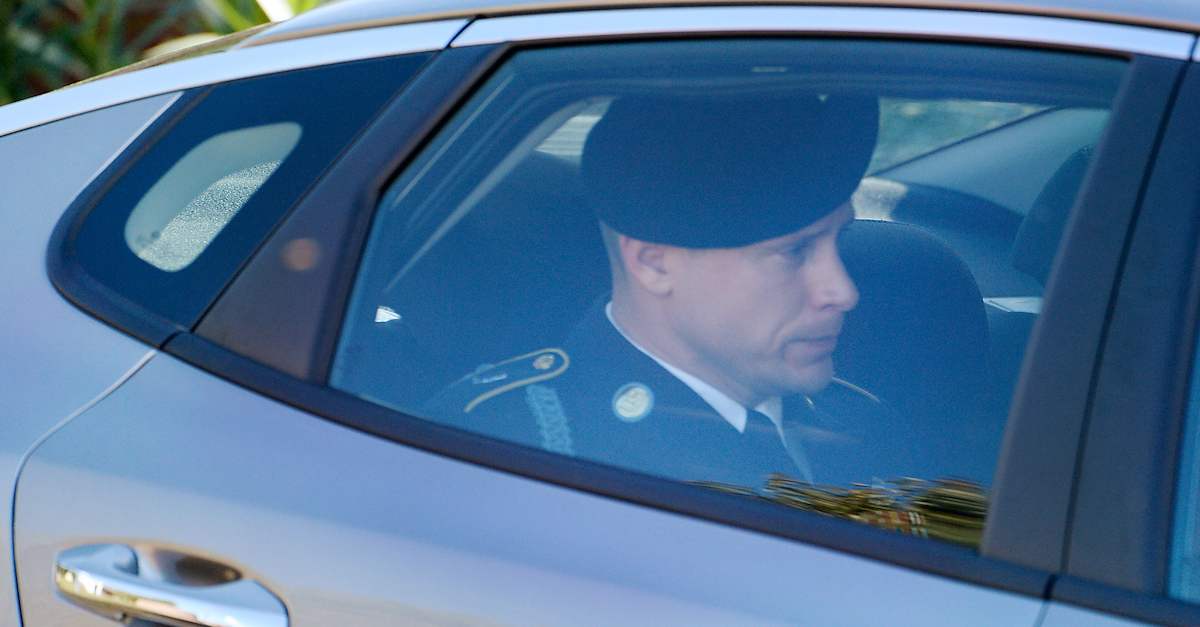 Bergdahl pictured as he was transported from the Ft. Bragg military courthouse after the prosecution and defense rested during his sentencing proceedings on November 2, 2017.

Filed in U.S. District Court in the District of Columbia, the complaint claims that Bergdahl, who spent five years as a prisoner of the Taliban after abandoning his post in Afghanistan, was railroaded by government actors for political gain.

“The case raises two basic due process issues: (a) whether the military courts erred in failing to remedy unlawful command influence (UCI) by former President Donald J. Trump and the late Senator John S. McCain, and (b) whether the military judge had a duty to disclose that he had applied for a lucrative job with the Department of Justice (DOJ),” the complaint stated. “The scandalous meddling in a specific case by leaders of the political branches—one of whom was Commander in Chief of the armed forces—would never be tolerated if the proceeding had been a criminal prosecution in this or any other federal district court and should not be tolerated in a court-martial.”

Bergdahl was dishonorably discharged after pleading guilty to desertion and misbehavior before the enemy, but the suit seeks to have that conviction overturned as being unconstitutional as a violation of due process.

Days after Bergdahl was brought back from captivity, McCain said the “decision to bring [him] home–and we applaud that he is home–is ill-founded . . . it is a mistake, and it is putting lives of American servicemen and woman [sic] at risk. And that to me is unacceptable.” He also stated, “I would not have made this deal,” adding, “would not have put the lives of American servicemen at risk in the future.”

Trump repeatedly denounced Bergdahl as a “traitor” during his 2016 presidential campaign, suggesting on several occasions that he should be executed.

The U.S. Army Court of Criminal Appeals in 2019 upheld the lower court’s finding of guilt and the dishonorable discharge, reasoning that public comments made by Trump and McCain did not have a significant impact on his prosecution.

Bergdahl also asserted that military judge Jefferey Nance, who presided over the court-martial and rejected his UCI motion, was simultaneously applying for a position as an executive branch-appointed immigration judge.

Less than one year after sentencing Bergdahl, Nance was appointed by then-Attorney General Jeff Sessions to a post as an immigration judge.

According to the complaint, Nance’s failure to disclose his application was grounds for disqualification.