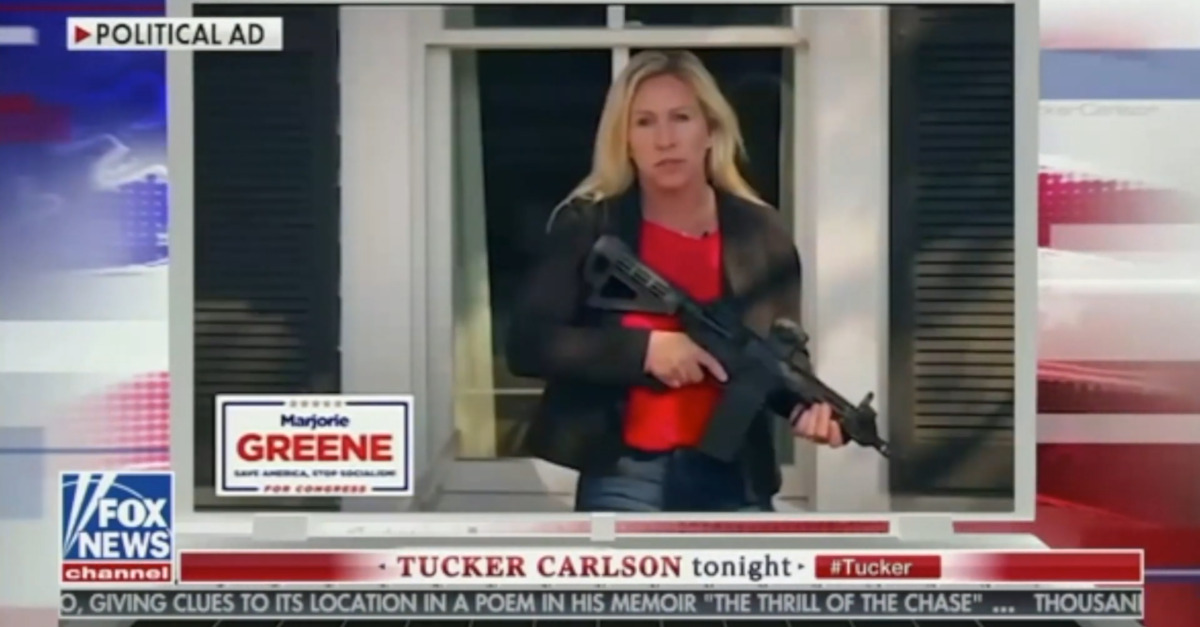 Congressional candidate Marjorie Taylor Greene, a Georgia Republican and devotee of the far-right QAnon conspiracy theory, has been sued in federal court for defamation.

The lawsuit was originally filed in early August by a mortgage company accusing former employee Melissa Rolfe of waging a media campaign that falsely blamed her June termination on the fact that Rolfe’s stepson, Garrett Rolfe–a former member of the Atlanta Police Department—shot and killed Rayshard Brooks earlier this year.

In other words, the fired stepmother accused her former employer of giving her the boot simply because she was related by marriage to the cop who fatally shot Brooks and sparked widespread racial justice protests over the summer.

In the amended legal filing reviewed by Law&Crime, the company, Equity Prime Mortgage, LLC, said that Rolfe was lying about why she was fired; Equity also alleged that Mrs. Rolfe had plenty of help when making her defamatory case to conservative media viewers.

The new complaint, filed on Sept. 24, tidily summarized the company’s side of the story:

In the brief time that Melissa Rolfe was employed as the HR Director at [Equity], she repeatedly violated company policy and created an uncomfortable and hostile working environment. After securing her position at [Equity] under false pretenses, she fostered a hostile work environment at the company by, among other things, calling employees “savages” and “fucking bitches,” joking about conducting rectal temperature checks in the office, saying that an employee was a “dumb bitch” who can only attract men because she “must suck dick really good,” and saying an employee had only gotten hired because she had “big boobs.” Even worse, she engaged in blatantly racist conduct, telling a Black woman who dates Black men that she needed “to get outside the box and upgrade [her] standards,” and—in response to another employee’s joke that she liked her coffee black and strong like she liked her men—by retorting “Black and weak. Don’t no woman want a weak man.” Not surprisingly, Rolfe lost people’s confidence in her ability to perform her job as an HR Director and was fired.

That’s where Greene and her congressional campaign come in.

In late June, Greene posted on Twitter that Rolfe had been terminated by Equity because her “employer caved to the mob and wrongfully fired her.” A follow-up tweet from Greene complained that Rolfe had “been treated very unfairly” by the mortgage firm.

That line of thought was quickly echoed by Fox News Tucker Carlson, who told his viewers that Rolfe “was fired” and that “her only crime was being officer Rolfe’s stepmother.”

“According to the source familiar with the matter who spoke to this program, Rolfe was promised that her job was safe, but today she was told, and we’re quoting, we have to terminate our relationship with you,” Carlson continued. “No other explanation was offered and honestly, no other explanation was needed. It was obvious what happened.”

According to the original petition, Rolfe, Greene, and Greene’s campaign conspired to plant a “false story” with Carlson–but Greene herself was not named as a defendant. Greene was added to the lawsuit in her personal capacity.

“The same day she was terminated, Rolfe conspired with the Campaign and Greene to defame [Equity] and peddle the falsehood that Rolfe had done nothing wrong and that she was fired for fighting for her stepson and being his stepmother,” the amended complaint alleges. “On information and belief, on June 18, 2020, Rolfe, the Campaign, and Greene jointly coordinated the planting of a false story with Tucker Carlson Tonight, authorizing, intending, and expecting that their false claims would be broadcast to a worldwide internet audience.”

And after that appearance, the narrative took on a life of its own.

By planting the false story with Tucker Carlson Tonight and repeating it during various public appearances during the summer of 2020, the Defendants and Greene swiftly mobilized a social media mob, death threats, and a boycott against [Equity], and [Equity] was bombarded with furious messages from people who believed the lie. As Rolfe’s attorney David Guldenschuh later explained on Tucker Carlson Tonight, [Equity’] “website was overwhelmed, more than 10,000 hits they got that literally shut down their website, it shut down their social media posts and it was overwhelmingly negative.”

But, the mortgage company says, Greene’s promotion of the defamatory claims did not end there.

According to the lawsuit, Greene, her campaign and Rolfe “doubled down in speeches and by securing appearances on The Glenn Beck Program and Tucker Carlson Tonight to repeat their lie and to falsely accuse [Equity] of defaming Rolfe.”

“The Campaign and Greene published defamatory statements regarding Rolfe’s termination, and Defendants continued to defame [Equity] from June 18, 2020, to present,” the filing continues.

Law&Crime reached out to the Greene campaign for comment on this story but no response was forthcoming at the time of publication.