Jerry Falwell Jr.’s Lawsuit Alleges Multiple Conspiracies, Says He Did Not Participate in or Enjoy Being Cuckolded 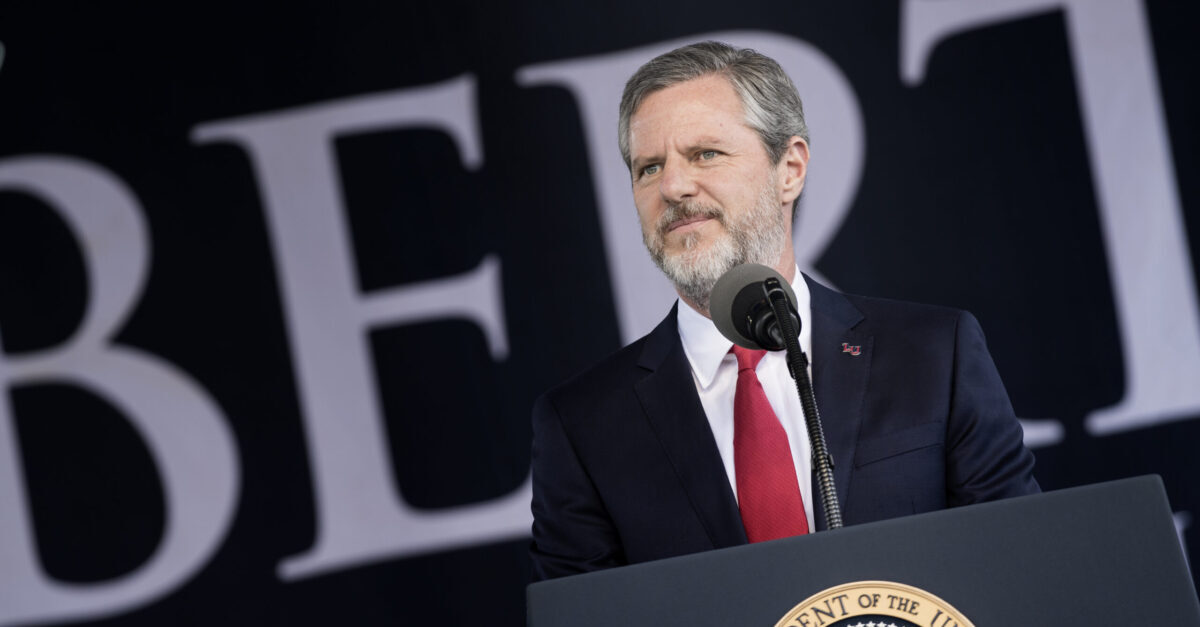 Jerry Falwell, Jr., the disgraced former president and chancellor of evangelical-focused Liberty University, sued the school founded by his own father, the late Jerry Falwell, for defamation on Thursday over the circumstances of his forced resignation earlier this year.

The 31-page complaint was filed in the Commonwealth of Virginia Circuit Court for the City of Lynchburg and alleges that the university his family administered for half a century “directly participated” in a “malicious smear campaign incited by anti-evangelical forces.”

This defamation effort began with a private extortion scheme based on admitted marital infidelity but eventually transformed into a coordinated political effort targeting “Falwell and his family” due to their support for President Donald Trump, according to the lawsuit.

At the basis of Falwell’s fall from grace, the complaint maintains, is former pool attendant Giancarlo Granda.

“At first, Granda impressed the Falwells with his entrepreneurial attitude and ambition, and the Falwells befriended him,” the filing notes. “Unbeknownst to Mr. Falwell, on rare occasions between 2012 and 2014, Mr. Granda and Mrs. Falwell engaged in an affair.”

The complaint goes on to note that Falwell was “heartbroken” when he learned about the cheating but ultimately forgave his wife and the couple attempted to move on. Granda, however, “was bent on continually threatening the Falwells and exploiting the affair to his financial advantage,” the lawsuit alleges.

Falwell claims his family initially declined to give in to the extortion attempt and that Granda “became increasingly erratic and threatening.” So, sensing a danger to the family coupled with an allegedly direct threat to harm the university, the Falwells settled on keeping Granda around–at least for awhile.

Granda’s threats placed an enormous amount of strain on the Falwells’ well-being–the constant anxiety contributed to Mr. Falwell losing 80 pounds over just two years. Although the Falwells wished to distance themselves from Granda completely, given the threat that he posed, the Falwells believed it best to maintain a positive relationship with him to placate his increasingly erratic behavior and manage his extortive demands while extricating themselves.

But that apparently didn’t work, Falwell says, because Granda “become obsessed” with “leveraging” their relationship for increasingly “more outrageous” sums of money.

The lawsuit claims that Granda had sensitive pictures and “illegal” recordings of the family that he promised to circulate if his monetary demands–allegedly in excess of $2 million near the end–were not met. But things apparently came to a head in 2020 when the former pool boy and illicit lover retained legal representation.

Around the same time, Granda apparently threatened the Falwells with what the complaint terms a “cooked up” lie “more damaging” than the simple fact of the two-year-long affair: Jerry Falwell, Jr.’s alleged cuckoldry and alleged enjoyment of said cuckoldry.

“Rather than just reveal the affair Granda had engaged in with Mrs. Falwell, Granda threatened to falsely claim that Mr. Falwell had been a willing participant in the affair, even watching the two engage sexually,” the lawsuit explains. “This was not true. Mr. Falwell did not participate in the affair and he certainly did not watch Granda having sex with his wife.”

After that, Falwell says he told Granda “in no uncertain terms” that “he would not be extorted” and the media campaign against the evangelical leader swiftly commenced.

“Because of the salacious nature of Granda’s false allegations, and because of Mr. Falwell’s family name, reputation among evangelicals, and public and vocal support for President Trump, political operatives who are opposed to President Trump’s re-election worked with Granda on his defamatory media campaign against Mr. Falwell,” the lawsuit alleges.

Chief among those, per the filing, is The Lincoln Project’s Kurt Bardella—who reportedly organized media interviews for Granda.

After those allegations became public, Falwell’s time with Liberty University was not long for this earth–in part due to his own spiraling response which included posting controversial and assumed-to-be sexually-oriented photographs on social media. Liberty cut ties with him in late August and he was gifted a $10.5 million payout.

Those millions, however, didn’t satisfy the plaintiff.

“Liberty University not only accepted the salacious and baseless accusations against the Falwells at face value, but directly participated in the defamation,” the filing alleges.

But that’s not quite all.

The plaintiff’s outrage appears to stem partially from, according to the complaint, yet another conspiracy–this time one of hypocrisy and illegality–emanating from within the hallowed confines of Liberty University itself.

Again the lawsuit at length:

Upon information and belief, certain key individuals directly involved in the decisions and actions to force Mr. Falwell’s resignation and then defame him were fulfilling a long-held goal to end Mr. Falwell’s fruitful thirty-two-year relationship with the University,” the lawsuit alleges. “Purportedly acting in the University’s interest to disassociate the University from Mr. Falwell’s alleged indiscretions, these individuals had engaged, or were engaged, in various illegal, unlawful, and immoral otherwise dubious acts in their stewardship of other institutions and otherwise which, if known to the public generally, would unquestionably tarnish the reputation of Liberty University by association.

Falwell is suing for defamation and breach of contract and requesting an injunction barring the university from repeating its prior statements against him as well as damages for each cause of action, punitive damages, interest and attorney’s fees.

“The Board of Trustees are busy at work in session for the next two days for their Fall meetings,” Liberty University spokesperson Scott Lamb said in an email. “The University would need to read and review a lawsuit before making comment, and as of this moment we have not been served.”