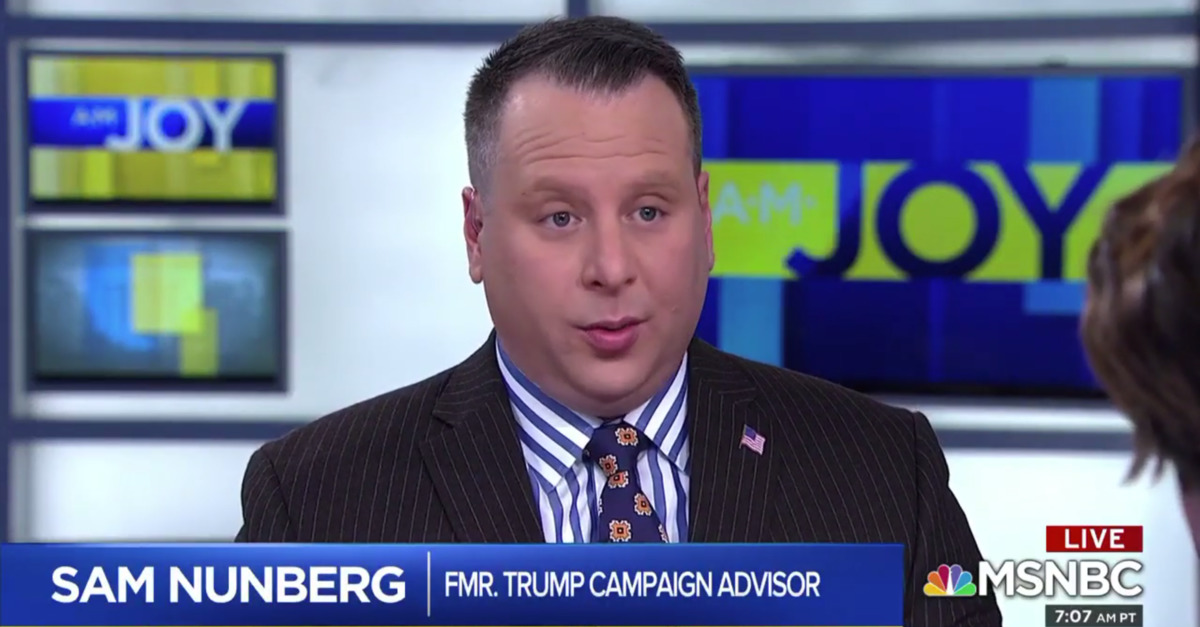 A former aide to President Donald Trump has filed a lawsuit against Chinese billionaire.

Sam Nunberg dazzled the nation in early 2018 by ignoring a subpoena issued by then-special counsel Robert Mueller and then promptly appearing on CNN to discuss why he had flouted the government investigator’s authority.

Now, Nunberg is incensed at Guo Wengui (a.ka. Miles Kwok) over a series of statements the wealthy New York socialite and self-styled “political dissident and anti-corruption whistleblower” made that allegedly disparaged him to the point of defamation, according to a 14-page lawsuit obtained by Law&Crime.

The facts are somewhat dizzying and involve a torturous cast of characters, legal events, claims and counterclaims.

Nunberg’s lawsuit leads off with a stunning array of charges:

Defendant Guo Wengui, also known as Miles Kwok, is a Chinese multi-billionaire currently residing in a luxe, $68 million apartment in Manhattan overlooking Central Park, which he occasionally leaves for trips on his luxury yacht or to visit President Trump’s private beach club, Mar-a-Lago. Guo, who styles himself as a political dissident and anti-corruption whistle-blower—but has, himself, been accused of corruption in China including bribery, fraud, and embezzlement, and has, additionally, been sued by Chinese dissidents for alleged tortious acts and defamation, and has also been sued for assault, battery, and false imprisonment for allegedly kidnapping and repeatedly, violently raping a younger employee [and] frequently utilizes social media, as well as litigation, to attack, harass, and disparage those whom he views as enemies and who would dare to question his carefully cultivated public persona.

Per the lawsuit, the controversy between the two men traces back to two separate lawsuits filed by Guo against another Chinese billionaire named Bruno Wu in the Southern District of New York (SDNY) and Trump confidant Roger Stone in Florida.

“Nunberg was not named, identified, or referenced in any way in either the SDNY Action or the Florida Action,” the lawsuit filed on Wednesday notes.

Things get a bit hectic from there.

On or about December 17, 2018, Stone and Guo entered into a settlement agreement in resolution of the Florida Action. Pursuant to the settlement agreement, Stone issued a public apology to Guo, published in several major news publications, including The New York Times, The Wall Street Journal, and The Washington Post, blaming his allegedly defamatory statements on information produced by Wu, using Nunberg as an intermediary.

“On information and belief, it was this statement that put Plaintiff Nunberg in Guo’s crosshairs,” the filing continues.

Guo then filed a lawsuit against Nunberg and Wu. Nunberg’s filing at length [emphasis in original]:

In this new lawsuit, Guo restated all of his prior claims against Wu from the dismissed SDNY Action, and tacked on defamation claims against both Wu and Nunberg based entirely on Roger Stone’s previous public statements, for which Guo had already sued and settled. Incredibly, Guo now alleged, out of thin air, that Nunberg was part and parcel of the Chinese government conspiracy, along with Wu, that resulted in Guo’s property being seized by the Chinese government in 2014 and 2015. Based on these preposterous fictions, Guo made a litany of claims against Nunberg, including violations of the Racketeering and Corrupt Organizations Act (RICO), and “conspiracy to defame,” which is a non-existent claim under New York Law.

“From the beginning, it was clear that Guo’s claims were factually absurd, legally deficient, time-barred, and baseless,” Nunberg’s filing continues. “The suit was brought for the sole purpose of harassing Wu and punishing Nunberg as an associate of Wu.”

Here’s a few choice cuts from an exhibit attached to Nunberg’s lawsuit.

Roger Stone apologized. He said that fake news came from Sam Nunberg and Wu Zheng. That is the guy. But Sam Nunberg immediately wants to sign a legal contract with Wu Zheng, because he is a licensed attorney. He said that he and Wu have attorney client relationship. If it is attorney client relationship, when the judge asks him,the judge cannot ask anything said between him and Wu, absolutely not. But he played a cunning trick, because the time of the contract signing was not related to this prior issue. If he played the trick, the judge would find him committing fraud, in other words, too smart for his own good.

“Why did Sam Nunberg go to a Jewish [club/synagogue] to spew big lies, saying he saved 60,000 Jews. This is totally ridiculous. If you ever have any commonsense, how could he have saved 60,000 people? Jewish people would remember every person that gave them a loaf of bread. In this aspect, Jewish people did very well.”

The lawsuit also contains a fair amount of non-legal color–essentially taking Guo to task for making the above antisemitic comments about Nunberg.

“Nunberg is the descendent of Holocaust survivors; his family escaped from Auschwitz, one of the largest of the Nazi death camps, where over a million Jews were brutally murdered. Nunberg and his family are strong supporters of Israel. Nunberg attended a highly selective Modern Orthodox Jewish day school for his high school education and still attends synagogue in New York City,” the complaint notes. “Guo’s absurd and entirely fabricated claim that Nunberg lied about having saved the lives of 60,000 Jews is beyond insulting; it is accusing a member of the Jewish faith of essentially lying to and manipulating his fellow Jews with respect to one of the most serious and devastating atrocities in their cultural history.”

Amid the complicated series of claims and recriminations, Nunberg does, briefly, accuse Guo of a tort.

Elliot Broidy is a well-known Republican fundraiser; Jho Low is a Maylasian businessman who is on the run across China and accused of embezzling billions of dollars. The scheme continues to have international repercussions.

Guo’s claim about Nunberg’s involvement in the matter, the lawsuit said, was outright slander.

The onetime Trump aide’s filing went on and on, ultimately calling Guo an alleged serial rapist.

“In reality, while Guo has disparaged Nunberg’s personal and professional character with lies, upon information and belief, Guo is a massive debtor who faces legal judgments and a myriad of civil and criminal charges throughout the world,” the lawsuit said. “Upon information and belief, Guo and his businesses have been implicated in coordinating massive fraudulent and corrupt schemes including, bribery, extortion, and even spying on suspected Chinese dissidents. Guo, who hides behind the veneer of ‘human rights’ and ‘political asylum,’ is also an alleged serial rapist in the United States.”