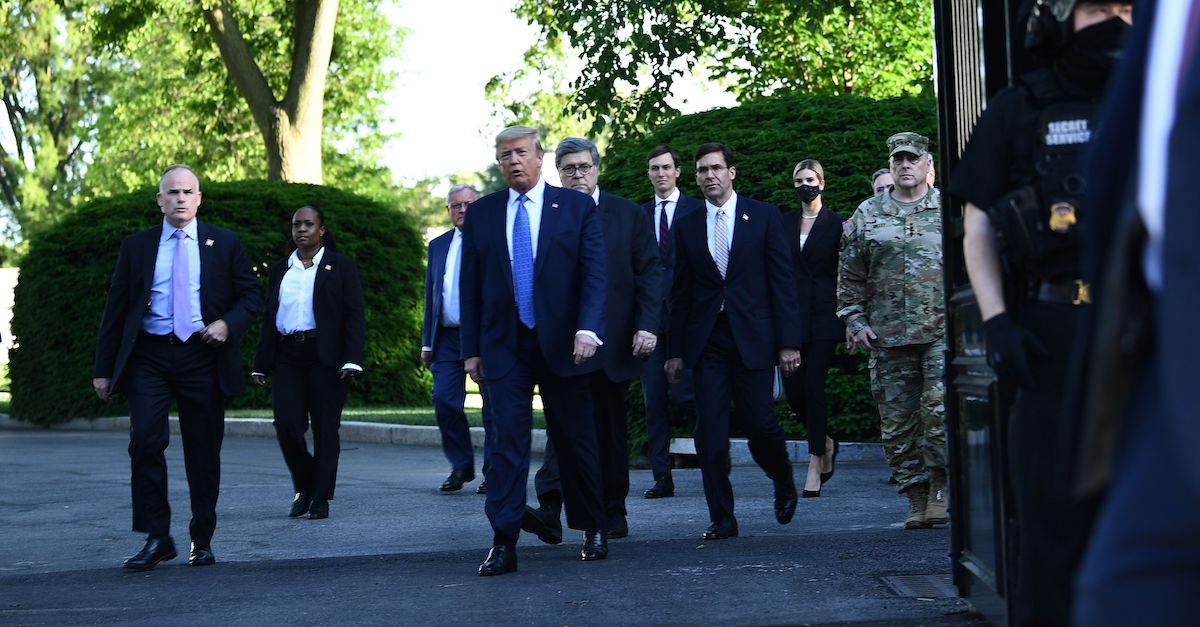 A federal judge in Washington, D.C. on Wednesday ruled that the identities of the federal officers who cleared protesters from the public park adjacent to the White House just before President Donald Trump walked across the street for a photo-op with a Bible will not, as of now, be exposed through Black Lives Matter D.C.’s lawsuit.

In a brief 5-page order, U.S. District Judge Dabney L. Friedrich reasoned that the plaintiffs had failed to show the requisite “good cause” that would entitle them to seek such discovery at this “unusually early” stage of the litigation. Trump appointed Friedrich to the federal bench in 2017.

“First, no preliminary injunction is pending, so any urgency typically associated with that extraordinary form of relief is inapplicable here,” Friedrich wrote. “Second, the plaintiffs made this request immediately after filing their Second Amended Complaint—not only prior to any Rule 26(f) conference, but also prior to the defendants having any opportunity to answer any of their complaints or to file any motions to dismiss—and therefore ‘well in advance of typical discovery.’”

The lawsuit, filed by Black Lives Matter and a coalition of various civil rights and civil liberties organizations, alleged that unidentified federal officers violated the protesters’ civil rights by using excessive force to quell a non-violent demonstration at Lafayette Park. President Trump, Attorney General Bill Barr, and several military and law enforcement leaders are named as defendants in the action.

On June 1, the administration controversially deployed federal law enforcement officers—who used tear gas, pepper spray, and rubber bullets— to forcefully remove the crowd of demonstrators protesting against police brutality in the aftermath of the Minneapolis police killing of George Floyd. Once the crowd was dispersed, President Trump made his way through the square to be photographed holding a bible in front of the St. John’s Episcopal Church, which had been damaged by a fire that was intentionally set by rioters the night before.

Plaintiffs sought early discovery in the case, hoping to learn not just the identities of officers who were on the scene, but also a list of which officers were equipped with certain weapons and those who used or discharged their weapons. Attorneys representing BLM argued that the information was needed for the legal team to effectively pursue the case, but Friedrich was unconvinced, citing administrative and privacy concerns.

“[P]rovisions of this sort of highly sensitive law enforcement information implicates core institutional interests of the organizations affected as well as substantial privacy interests of the individual officers who are the subjects of the requests, and would therefore almost certainly require a protective order,” the judge wrote. “The nature and volume of the discovery sought undeniably would impose significant burdens on the defendants in terms of refining the details of the requests, negotiating the appropriate protective order, and obtaining and providing the required information.”

While Friedrich denied the plaintiffs’ request, she emphasized that her decision was only based on the timing of the request, saying that they may be entitled to the discovery at the “normal juncture” in the litigation.