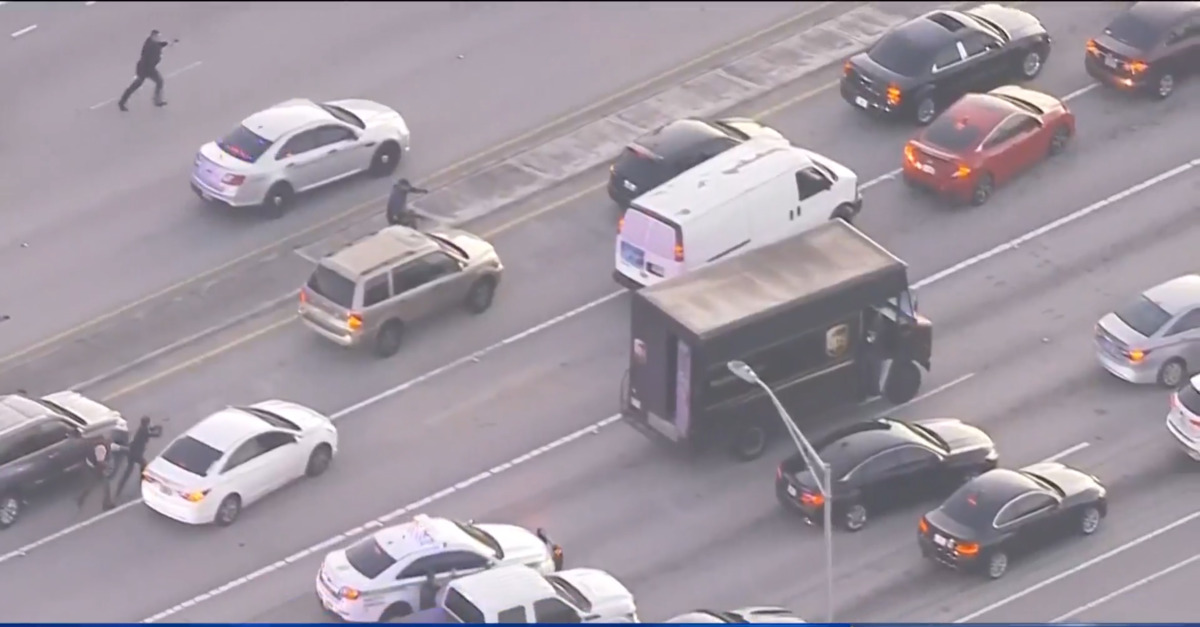 UPS driver Frank Ordonez, a 27-year-old father of two, was scheduled to be off and had clocked in to cover a friend’s shift on the day he was killed by police in late 2019. At the precise moment of his death, Ordonez was being held hostage when several members of various police departments unloaded their weapons into his truck. Now, his family is suing.

The 34-page complaint was filed in Broward County, Florida on Monday by Ordonez’s estate and another victim of the shootout, Carlos Lara. The lawsuit names the Miami-Dade Police Department, Broward County Sheriff’s Office, Florida Highway Patrol and the police departments of Miramar, Doral and Pembroke Pines as defendants.

The filing recounts the events that transpired leading up to Ordonez’s death and Lara’s “serious injuries”–beginning with the armed hijacking of Ordonez’s truck and concomitant kidnapping. That confrontation quickly turned violent and deadly.

“After law enforcement, including the Defendants, became aware of the hostage scenario, a high-speed chase of the truck, with Ordonez inside, ensued,” the lawsuit says. “While on or near the Miramar Parkway, and surrounded by civilian vehicles, including vehicles occupied by Richard Cutshaw [who was also killed] and Carlos Lara, the truck was confronted by law enforcement.”

Initial press reports pegged the number of shots fired during the incident at somewhere in excess of 200 rounds. And while the cause and effect of those bursts of gunfire is not seriously in dispute, the lawsuit offers three legal theories of liability for the police departments being sued.

The lawsuit goes on to blame the six named police departments for “failing to stop the truck in an area that was not populated by civilians,” for failing to “lead the truck away from civilian traffic,” and “for failing [to] negotiate with the robbers” as part of “an effort to avoid the use of force.”

Other allegations include a police failure to communicate with other departments and failure to limit civilian exposure to the scene of the shootout generally. The plaintiffs also criticized police for using civilians and their vehicles as shields and for discharging their firearms “incorrectly” and without locating a target.

Videos of those tactics went viral.

Moreover, the complaint alleges, the police departments failed to abide by their own standards and practices because they allegedly did not intervene to stop the “unreasonabl[e]” assault or render “specific aid to civilians trapped in the midst of [the] shootout” caused by the police’s own actions.

“As result of the Defendant’s negligent implementation of its policies, the chances of resolving the hostage scenario, and rescuing Frank Ordonez alive, was eliminated,” the lawsuit alleges. “As a result, Frank Ordonez was shot and killed. As a direct and proximate cause of the negligence of the Defendant, Frank Ordonez suffered severe bodily injury which caused his death, and his Estate and survivors have suffered, and will continue to suffer damages into the future.”

As a direct and proximate cause of the negligence of the Defendant, Carlos Lara suffered bodily injury resulting in pain and suffering, disability, disfigurement, mental anguish, aggravation of a preexisting condition(s), loss of the capacity for the enjoyment of life, expenses of hospitalization, medical and nursing care and treatment, and loss of earnings. These losses are either permanent or continuing in nature, and the Plaintiff, Carlos Lara, will suffer these losses in the future.

“We hope the Defendant-Police Departments will release copies of their Body Worn Camera Footage and patrol car radio transmissions,” attorneys Adam Finkel and Michael Haggard said in a statement.

“The Ordonez and Lara families – and the public – have the right to know what happened, and how law enforcement reacted on this tragic day,” the statement continued. “It is in the best interest of this very emotional case for the Ordonez and Lara families that no further comment beyond this statement is given at this time. As more evidence is released, the families and our attorneys will grant interviews. What happened that day should never have occurred.”

Ordonez’s family has been critical of the police departments responsible for the death of their son.

“They murdered him,” Joe Merino, the deceased’s stepfather told Local 10 News the day after he died. “I hope you can understand that and how I feel because it could have been prevented.”

“Today I lost my brother, because of the fucking negligence and stupidity of the police,” tweeted Genevieve Merino. “Instead of negotiating with a hostage situation they just shot everyone. (Including my brother) please retweet this so everyone can be aware how stupid these cops are.”

Law&Crime reached out to the Miami-Dade Police Department for comment on this article but no response was forthcoming at the time of publication.

Read the original petition below: