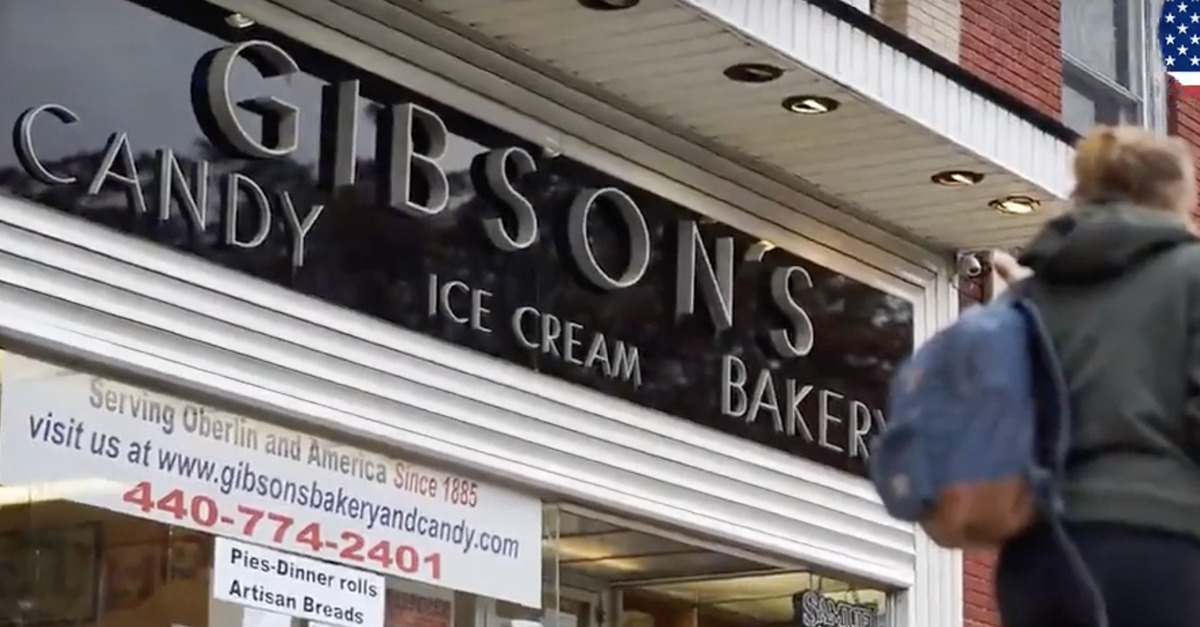 An intermediate Ohio appellate court recently ruled 3-0 that a progressive college must pay $33 million in damages for defaming a local bakery.

The case stemmed from a boycott that the appeals court said went legally wrong. On Nov. 9, 2016 (the day after Donald Trump was elected as president), three Black students at Oberlin College were arrested for attempting to steal bottles of wine from Gibson’s Bakery, an establishment close to campus. Oberlin’s Student Senate immediately declared the incident a case of racial profiling, and without investigating any further, it passed a resolution calling for a boycott of the bakery.

The college’s administration got on board, too, and sent an email to students heavily implying that Gibson’s had discriminated against the students on the basis of race. Then-Dean of Students Meredith Raimondo and others handed out flyers that supported the boycott and accused Gibson’s of having a history of racial profiling. What’s more, Oberlin took steps to support a protest of Gibson’s. Evidence adduced at trial showed that the school provided a break room in a nearby building for protesting students in which they could partake in coffee and pizza. Dean Raimondo also agreed to reimburse a student $75-100 for money spent on gloves given to protesters to combat cold weather.

As a result of the outcry, Gibson’s lost significant business; not only did the bakery lose individual patrons, but it was also dropped from a major contract for baked goods that it had with Oberlin’s food services provider.

Gibson’s Bakery, however, had not racially profiled the shoplifters, according to the court record. The bakery was exonerated when the arrestees admitted in open court that they had indeed attempted to shoplift and even engaged in physical altercations with Gibson’s staff.

The bakery sued Oberlin for defamation, intentional infliction of emotional distress, and intentional interference with business relationship. After a six-week trial, the jury returned a verdict of $11.2 million. Then, to make matters worse for Oberlin, the jury made a secondary finding that increased the verdict threefold to $33.6 million.

Oberlin appealed the massive verdict and made a number of arguments urging the appeals court to overturn the verdict. The three-member panel of the Ohio Court of Appeals was utterly unconvinced.

Judge Donna J. Carr wrote for the panel. In the ruling, Carr pointed out that the case did not present a general First Amendment issue about the right to protest.

“This Court must emphasize, however, that the sole focus of this appeal is on the separate conduct of Oberlin and Raimondo that allegedly caused damage to the Gibsons, not on the First Amendment rights of individuals to voice opinions or protest,” Carr wrote.

In the court’s 50-page opinion, Judge Carr recounted the trial court’s findings with respect to defamation. She explained the content of the email and flyer circulated on campus:

Given the public’s lack of knowledge of what had happened at the bakery and the ongoing tension on campus about racial injustice, these statements would convey to a reasonable reader that the arrest and alleged assault at the bakery were racially motivated, that the Gibsons had a verifiable history of racially profiling shoplifters on that basis for years, and that those facts were a reason to boycott the bakery.

Because the statements of fact included in the materials distributed were false, were distributed among students, and were the cause of Gibsons’ financial damages, the appeals court saw no reason to overturn the trial court’s finding of liability.

Similarly, the panel was unmoved by Oberlin’s argument that the punitive damages were excessive and unfair. Noting (but not specifically agreeing with) Gibson’s argument “that imposition of the cap in this case, in effect, permits a billion-dollar institution to treat its tortious conduct as nothing more than a cost of doing business and allows it to continue such conduct,” the panel declined to overturn the damages ruling.

Reactions to the hefty ruling against Oberlin have been swift and fierce. Ohio Attorney General Dave Yost tweeted that the ruling represented “[t]he cost of woke.”

The cost of woke.

All this matters tremendously to other colleges and universities, especially liberal arts colleges where students and faculty tend to be left-leaning and protests are not uncommon. The idea that a few copies of a flyer being handed out by an administrator plus a student senate resolution could translate into millions of dollars of damages seems astonishing on its face. It’s a stark reminder that college employees acting in the course of their jobs can put the school into substantial legal jeopardy.

Oberlin may still choose to appeal the ruling to the Ohio Supreme Court or even the United States Supreme Court.

“Oberlin is obviously disappointed that the appeals court affirmed the judgment in its ruling,” a representative of the college told Law&Crime. “We are reviewing the Court’s opinion carefully as we evaluate our options and determine next steps.”

“In the meantime,” the representative continued, “we recognize that the issues raised by this case have been challenging, not only for the parties involved in the lawsuit, but for the entire Oberlin community. We remain committed to strengthening the partnership between the College, the City of Oberlin and its residents, and the downtown business community. We will continue in that important work while remaining focused on our core educational mission.”

Read the opinion, below.

Editor’s note: This piece has been updated to include a comment from an Oberlin representative.