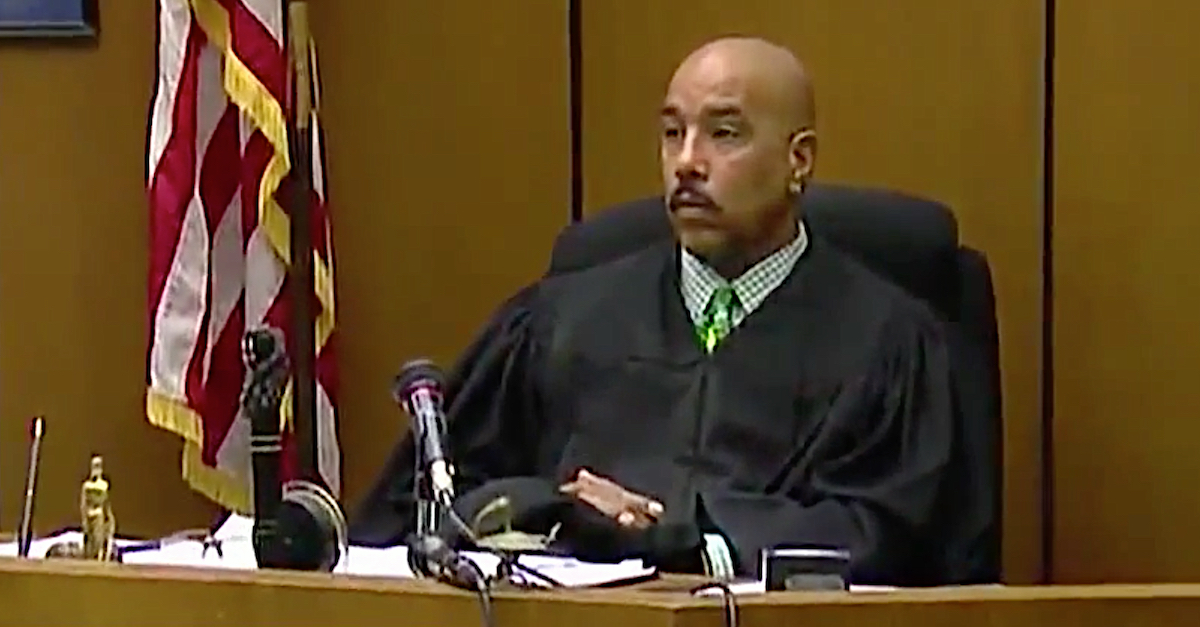 A male Wayne County, Mich. judge on the bench since 1992 has been accused in a formal ethics complaint of using sex analogies to teach female prosecutors how to question a medical examiner about the cause and manner of a victim’s death. He is also accused of the “inappropriate use of sexually graphic language” for saying while in chambers that a prosecutor did nothing but “show they fucked!” with reference to a defendant and a deceased victim. That’s not all, however; the judge is also accused of asking and commenting on the appearances of two female prosecutors and  “overtly eyeing both of their bodies,” the ethics document says.

The complaint surrounds the conduct of Judge Bruce Morrow during the two-day murder trial of James Edward Matthews in June 2019. Two female prosecutors were assigned to the case. The complaint refers to them only as APA A and APA B.

“During a break in the proceedings on June 11, 2019, APA A asked respondent for feedback about her direct examination of the medical examiner,” the document goes on to say.  The judge “told APA A he was going to come down from the bench to talk to her personally because what he was going to say to her would make her ‘blush.'”

The complaint says the judge then “positioned himself very close to APA A, with his head very close to her head.”  He then said something “to the effect of” this:  “So when a man and a woman are close, they start by holding hands, rubbing elbows, kissing, foreplay, then that leads to sex?”

The bizarre analogy went on from there: “would you want foreplay before or after sex?  You want the foreplay before the sexual intercourse. That’s what we call cuddling. No, you start with holding hands.”

The judge, according to the complaint, then turned the analogy back to the actual question from the prosecutor about her direct examination of the medical examiner:  “the climax of sex is akin to getting the medical examiner to state the cause and manner of death after getting the details of his examination of the body,” the judge is accused in the complaint of saying.

Further, according to the complaint, the judge said: “You start with all the information from the report, all the testimony crescendos to the cause and manner of death, which is the sex of the testimony . . . you want to tease the jury with the details of the examination . . . you want to lead them to the climax of the manner and cause of death.”

“Respondent’s discussion with APA A caused her to feel ‘frozen’ and afraid to move,” the complaint then states.

Later, when the jury in the Matthews case was deliberating, the judge called both defense attorneys and prosecutors into his chambers and started commenting on the defendant’s sex acts with the victim. From the complaint (the respondent is the judge):

Respondent discussed with APA B her reasons for having presented evidence that the defendant’s DNA was found in the deceased victim’s vaginal swab.

Respondent disagreed with APA B’s reasons for having presented that evidence, and said words to the effect of “all you did was show they fucked!”

Respondent made fun of the defendant’s testimony that he and the deceased did not have sex the way they normally did because the deceased was pregnant and he did not want to hurt the baby and cause a miscarriage. Respondent said words to the effect of “how big does this guy think he is?[“]

Respondent said words to the effect of “does he think his dick is so big that he would hurt that baby?”

Respondent said words to the effect of “this guy must feel real good about himself to think his dick is that big.”

The judge is then said to have used more sex analogies to comment on the way Prosecutor B did her job:

During the in-chambers discussion, respondent criticized some of APA B’s voir dire. During the critique respondent said to her words to the effect of “if I want to have sex with a woman on the first date, how would I figure that out? I wouldn’t ask her if she wants family or children or what she does, I would ask her ‘have you had sex on a first date before?’ Would you sleep with me on a first date?”

He then argued with that second prosecutor’s use of terminology about sex:

And, yet, there is more.

Judge Morrow is also accused of commenting on the prosecutors’ appearances.  He asked Prosecutor B how tall she was and how much we weighed, the complaint says; he asked Prosecutor A if she weighed 115 pounds.  “When APA A responded with respect to her weight, respondent said words to the effect of ‘Well, I haven’t assessed your muscle mass yet,'” the document goes on to say.

“While respondent was having this conversation with APAs A and B, he was overtly eyeing both of their bodies,” it concludes.

Here, the judge was accused of violating a litany of laws and rules, including Michigan Court Rule 9.202(B)(1)(d) (forbidding “treatment of a person unfairly or discourteously because of the person’s race, gender, or other protected personal characteristic”), Michigan Court Rule 9.202(B)(1)(c) (“persistent failure to treat persons fairly and courteously”), and Canons 1, 2(A), 2(B), 3(A)(14), 3(A)(3) of the code of the Michigan Code of Judicial Conduct.

The judge is required to respond to the accusations within 14 days. “Willful concealment, misrepresentation, or failure to file an answer and disclosure are additional grounds for disciplinary action,” the document says.

Judge Morrow has been in ethics trouble in the past according to a 2013 report by WXYZ-TV.

READ the full complaint below: