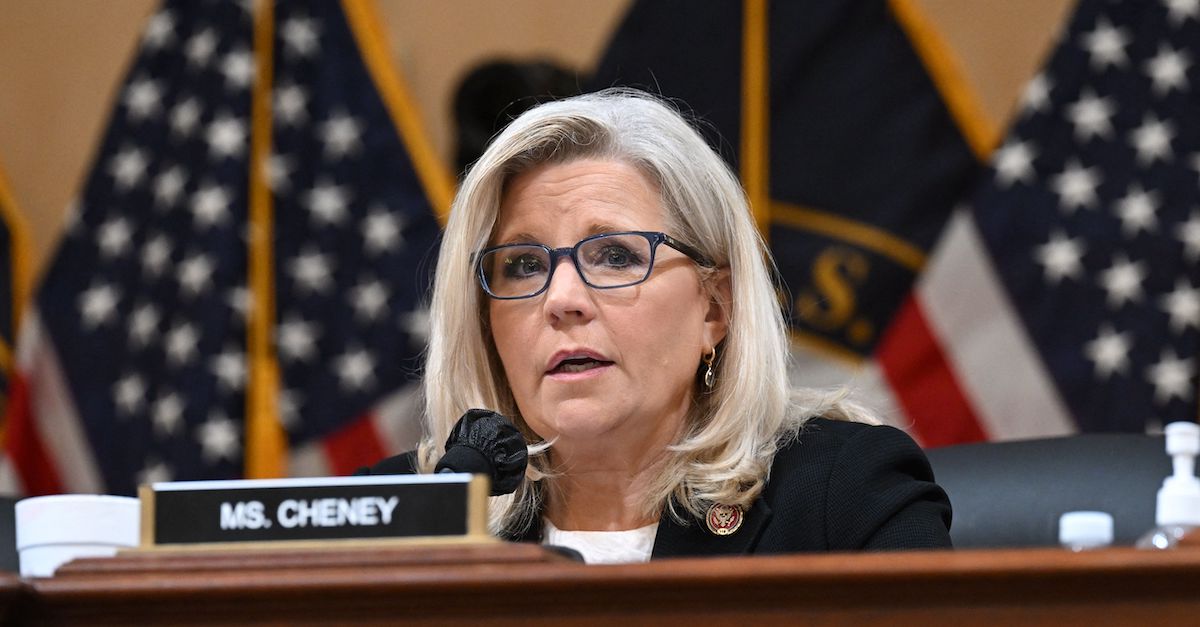 Rep. Liz Cheney (R-Wyo.) speaks at the opening of a hearing on the January 6th Investigation on Capitol Hill on July 12, 2022, in Washington, D.C.

At the end of Tuesday’s hearing before the House committee investigating the Jan. 6 attack on the U.S. Capitol, Rep. Liz Cheney (R-Wyo.) revealed that former President Donald Trump had directly reached out to a witness in the investigation — and that the committee has shared details thereof with the Department of Justice.

Cheney says Trump called the witness after the previous hearing on June 28.

“After our last hearing, President Trump tried to call a witness in our investigation — a witness you have not yet seen in these hearings,” Cheney said. “That person declined to answer or respond to President Trump’s call and instead alerted their lawyer to the call. Their lawyer alerted us, and this committee has supplied that info to the DOJ.”

“Let me say one more time: we will take any effort to influence witness testimony very seriously,” she added.

“One of the Most Serious Allegations”

In interviews with Law&Crime, former federal prosecutors interpreted the announcement as Cheney’s shot across the bow to Trump.

“This was merely a warning to Trump by Cheney, to dissuade him from trying to tamper with witnesses,” Renato Mariotti, an ex-prosecutor and frequent legal analyst, said. “A phone call that didn’t go through, on its own, is not a sufficient basis for a witness tampering charge.”

“That said, Cheney was smart to put down a marker and warn Trump not to tamper with witnesses. Savvy use of her platform,” Mariotti added.

Mitchell Epner, who formerly served in the District of New Jersey, found that the announcement was not to be understated.

“This is one of the most serious allegations that’s ever been made against the President of the United States — and it should be,” said Epner, now a partner at Rottenberg Lipman Rich, PC.

Epner did emphasize, however, several unknowns, if investigators did choose to look into the claim.

“They would want to know (a) whether or not there was any message that was conveyed directly by Trump, (b) whether or not Trump had conversations with people about what this witness was expected to stay, so that (c) there could be an understanding of what type of testimony Trump might have been trying to dissuade the witness from providing,” he said in a phone interview.

“Continue to Be a Team Player”

Though explosive, the allegation hardly stood alone. The committee had previously revealed that people close to Trump had allegedly contacted witnesses who were set to appear before the committee.

“What they said to me is, as long as I continue to be a team player, they know that I’m on the team, I’m doing the right thing, I’m protecting who I need to protect, you know, I’ll continue to stay in good graces in Trump World,” one witness said, according to the committee. “And they have reminded me a couple of times that Trump does read transcripts and just to keep that in mind as I proceeded through my depositions and interviews with the committee.”

Witness tampering is a federal crime punishable by up to 20 years in prison. The statute, 18 U.S. Code § 1512, reads as follows:

Whoever knowingly uses intimidation, threatens, or corruptly persuades another person, or attempts to do so, or engages in misleading conduct toward another person, with intent to—

(1) influence, delay, or prevent the testimony of any person in an official proceeding;

(2) cause or induce any person to—

(A) withhold testimony, or withhold a record, document, or other object, from an official proceeding;

(B) alter, destroy, mutilate, or conceal an object with intent to impair the object’s integrity or availability for use in an official proceeding;

(C) evade legal process summoning that person to appear as a witness, or to produce a record, document, or other object, in an official proceeding; or

(D) be absent from an official proceeding to which such person has been summoned by legal process; or

(3) hinder, delay, or prevent the communication to a law enforcement officer or judge of the United States of information relating to the commission or possible commission of a Federal offense or a violation of conditions of probation, supervised release, parole, or release pending judicial proceedings;

Many Jan. 6 defendants have been charged under a different section of the same statute that analogously prohibits interfering with an official proceeding.

“Does Not Exonerate Him”

During the Russia investigation, Trump’s attacks and contacts with witnesses filled the pages of then-special counsel Robert Mueller’s report. Mueller found that, on multiple occasions, Trump’s conduct met all three prongs of the statute, but the special counsel declined to accuse the former president of committing a crime, citing Justice Department guidance against indicting a then-sitting president.

That guidance spurred Mueller to end his tome by noting “while this report does not conclude that the President committed a crime, it also does not exonerate him.”

Attorney General Merrick Garland has not charged Trump with that conduct, now that the 45th president is out of office. Experts have wrangled over when the five-year statute of limitations on the statute expires, based on the specific allegations of the report.

“All of the things that are referenced in the Mueller investigation that took place in 2016 has passed,” Epner noted.

Asked whether Trump may have felt emboldened by the Justice Department declining to prosecute him on witness tampering allegations to date, Epner quipped: “I’m smart enough to know that I cannot plumb the mind of Donald Trump.”

Trump’s attorney Alina Habba did not immediately respond to Law&Crime’s press inquiry. The Justice Department declined to comment on the Committee’s revelation.