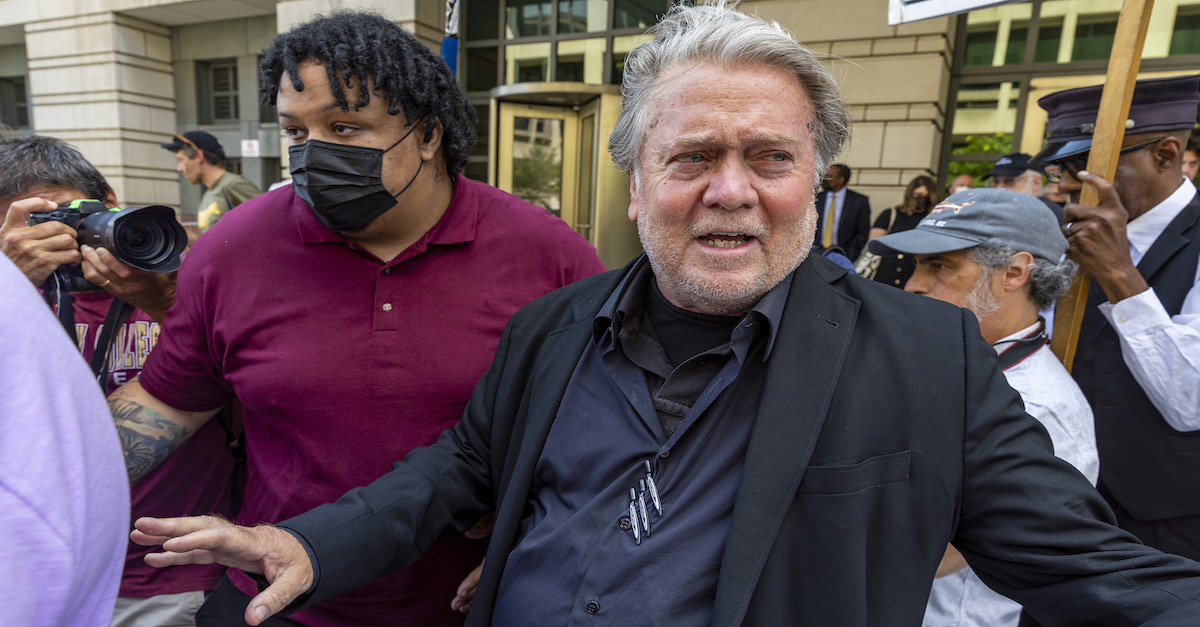 Former White House senior strategist Stephen Bannon leaves the Federal District Court House after being found guilty of being in contempt of Congress on July 22, 2022 in Washington, D.C. (Photo by Tasos Katopodis/Getty Images.)

Former White House strategist and top Donald Trump adviser Steve Bannon is trying to get a federal judge to dismiss the government’s contempt of Congress case against him weeks after being convicted by a jury.

“The Court concludes that the evidence presented in the government’s case was sufficient to sustain a conviction,” Nichols said in the order. “The only reason the Court did not make this ruling on the record at the time the Motion was made orally was the Court’s concern about the risk of potential jury bias, as the Court articulated on the record.”

As to Bannon’s renewed Motion to Dismiss the case, Nichols ordered the defendant to file additional briefing. Bannon, through his lawyer David Schoen, did so on Friday.

“We respectfully submit that the refusal of the congressional witnesses to comply with Defendant’s trial subpoenas seeking testimony and documents and the Court’s Order quashing the subpoenas resulted in a trial that violated Mr. Bannon’s Fifth and Sixth Amendment rights,” the motion said.

The constitutional violations, Schoen argued, stem from Nichols’ decision to grant motions to quash by members of Congress who Bannon subpoenaed in connection with the litigation. Congress responded with offers for testimony from two staff members of the House committee investigating Jan. 6: Kristin Amerling, chief counsel and deputy staff director, and Sean Tonolli, senior investigative counsel.

“[A]ny relevant testimony can be obtained from Ms. Amerling and Mr. Tonolli,” the motion to quash said. “There is no basis to believe that any of the other subpoenaed individuals would have additional relevant evidence.”

Schoen said that denying Bannon access to the members of Congress was a due process violation.

“[Nichols’ decision] prevented Mr. Bannon from calling his own witnesses – namely, Members of Congress with the actual authority to issue a subpoena, opine as to the pertinence or lack thereof of requests in the subpoena and proposed deposition inquiries, take the procedural steps necessary to seek deposition testimony, authorize accommodations, pursue alternative avenues to criminal prosecution such as negotiating on executive privilege or seeking a civil adjudication of the privilege dispute, and initiate a criminal prosecution,” Schoen said in the brief. “That made it impossible to fully challenge the Government’s evidence as presented through a congressional staffer. Granting the Motion to Quash denied Mr. Bannon his constitutional rights to due process of law, compulsory process, to confrontation, to effective assistance of counsel, and to a fair jury trial.”

Schoen also said that Nichols’ ruling “had the effect of denying to Mr. Bannon the basic documents that the Government must provide to the defense in any criminal trial.”

In a footnote, Schoen commented on Nichols’ July 27 order, saying that it put Bannon’s motion to dismiss in an “unusual” position:

The Motion is now in an unusual procedural posture. It seeks to dismiss the indictment based on granting the motion to quash and the corresponding refusal of the subpoena recipients to testify voluntarily or otherwise, or, in the alternative, to exclude the Congressional evidence adduced by the Government at trial through Ms. Amerling. During the Hearing on July 21, 2022, the Court asked whether it could reserve judgment on this Motion to Dismiss, like the then pending Rule 29 motion, while the jury deliberates and the undersigned agreed that the Court could.

In other words, Schoen seems to be saying in the footnote, Nichols must consider the sufficiency of the same evidence in the motion to dismiss as he did in the motion for judgment of acquittal. In the latter, Nichols already determined that the government’s evidence had presented enough to convict.

The government’s responsive brief is due Aug. 12.