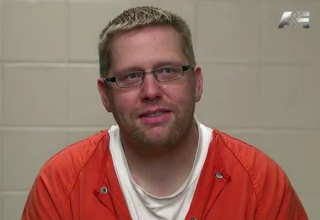 Television and movies have given us an impression of what goes on in U.S. jails, but they can only go so far. After all, once the cameras are off, jail or prison life returns to normal, or not so normal as the case may be. Seven innocent civilians agreed to go that next step further when they volunteered for “60 Days In,” a new reality show premiering March 10 on A&E. Yes 60 days in.

The undercover inmates include a teacher, social worker, and an ex-Marine who aspires to be a DEA agent. They went through a training process with Sheriff Jamey Noel, who came up with the idea for the show to expose corruption in the Clark County Jail in Jefferson, Indiana, where it takes place. As you can imagine, this was all quite a risk for this bold Sheriff to take.

No amount of training could have prepared the subjects for their two-month stint in the slammer, where none of the inmates, jail staff, or officers, knew their true identities or, of course, the fact that they were not charged with any crime. Instead, they were given crimes to claim they were charged with and different names. From prisoners making their own booze to nightly love affairs, to drugs being smuggled on meal trays, the seven volunteers were surrounded by, and in some cases the subjects of, some stereotypical jail experiences. There were some particularly dark moments as well, like brutal fist fights, rape threats, and an attempted suicide. At times, the idea of spending two months there must have felt like an eternity. Not all of them made it the whole way through and of course, the cameras captured every moment.

Something tells me they won’t want to go back for any follow up.

LawNewz founder Dan Abrams hosts the finale where the subjects, who had no idea how many other jail plants there were, come together to meet the others and discuss their experiences.

Here is the trailer from A&E: