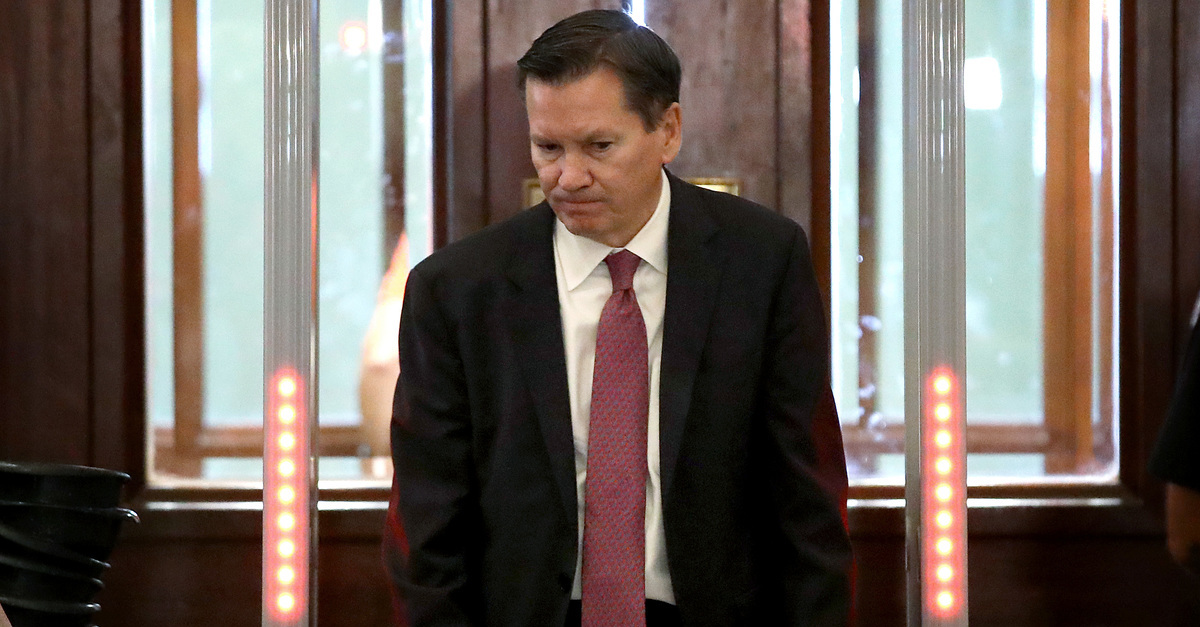 According to four anonymous sources cited by the New York Times, Atkinson’s original sin was a finding that the whistleblower’s complaint was credible in the first place. The second act stoking Trump’s alleged ire was discussing that complaint before Congress.

Mr. Trump first expressed his dismay about Mr. Atkinson around the time the whistle-blower’s complaint became public in September. In recent weeks, he has continued to raise with aides the possibility of firing him, one of the people said.

The president has said he does not understand why Mr. Atkinson shared the complaint, which outlined how Mr. Trump asked the Ukrainian president to investigate Mr. Trump’s political rivals at the same time he was withholding military aid from the country. He has said he believes Mr. Atkinson, whom he appointed in 2017, has been disloyal, one of the people said.

“The ICIG confirmed the Complainant was such an employee, detailee, or contractor,” the ICIG press release noted.

The same statute also requires such a complaint be related to an “urgent concern.”

That term of art is defined, in relevant part, as:

A serious or flagrant problem, abuse, violation of the law or Executive order, or deficiency relating to the funding, administration, or operation of an intelligence activity within the responsibility and authority of the Director of National Intelligence involving classified information, but does not include differences of opinions concerning public policy matters.

“The Inspector General of the Intelligence Community determined that the Complainant alleged information with respect to such an alleged urgent concern,” the ICIG noted.

Additionally, and in line with the statute on point, Atkinson’s office had to determine whether nor the complaint “appeared credible.”

Atkinson concluded: “The ICIG reviewed the information provided as well as other information gathered and determined that the complaint was both urgent and that it appeared credible.”

After that, Atkinson provided the still-secret-at-the-time complaint to Acting Director of National Intelligence Joseph Maguire–on August 26, 2019. Maguire, however, in apparent violation of federal law, refused to hand over the complaint to Congress.

Atkinson later testified before Congress–alerting House members to its presence and the potentially devastating impact its contents might hold for the Trump White House. Congress’s eventual receipt of the complaint was, by then, something of a fait accompli.

Trump publicly attacked Atkinson in early October by calling the Ukraine phone call scandal both a “Scam” and “Hoax.” Trump also questioned why Atkinson hadn’t done anything about the whistleblower’s ties to the Democratic Party.

Maguire, for his part, testified that Atkinson was straight-laced and operated by the book in dealing with the whistleblower’s complaint.

“I want to stress that I believe that the whistleblower and the inspector general have acted in good faith throughout,” Maguire told Congress in late September. “I have every reason to believe that they have done everything by the book and followed the law.”

That combination of public and private scorn could well spell an unceremonious end to Atkinson’s tenure as ICIG.

But others cited by the Times aren’t so sure.

“It is unclear how far Mr. Trump’s discussions about removing Mr. Atkinson have progressed,” the outlet notes. “Two people familiar with what took place said they thought that Mr. Trump was just venting, and insisted that Mr. Atkinson’s dismissal was never under serious consideration.”

Atkinson was nominated to the position of ICIG by President Trump in November 2017; he was confirmed by the Senate via voice vote–effectively unanimously and without opposition–in May 2018.