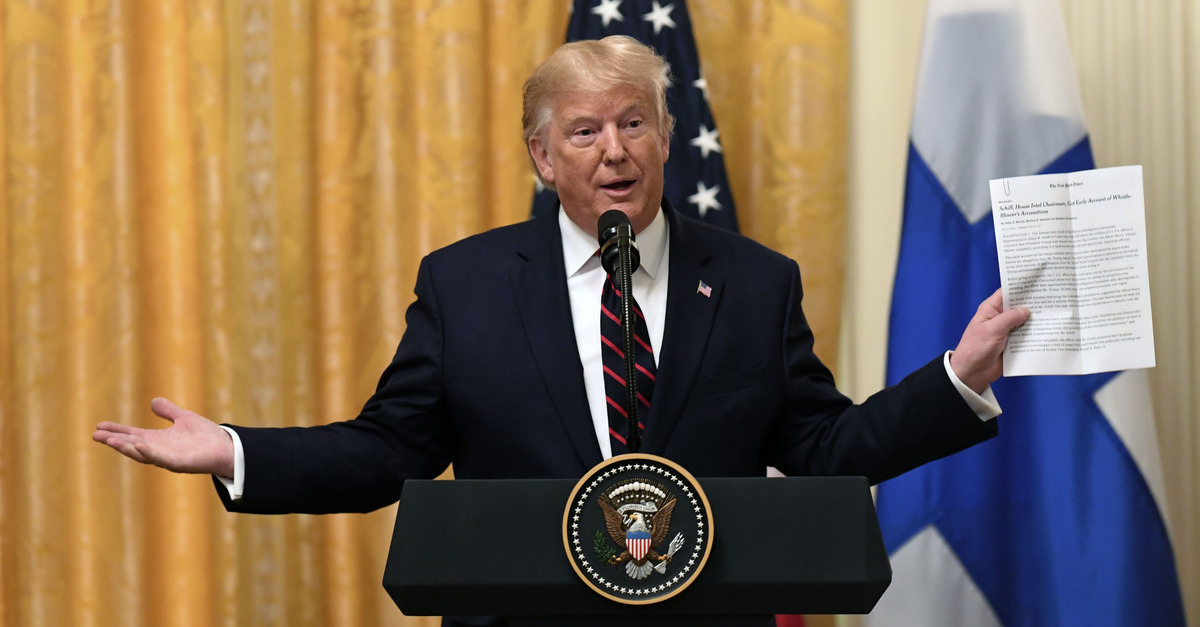 House Democrats on Tuesday released a draft resolution which would formalize their impeachment inquiry into President Donald Trump.

The eight-page resolution will be introduced by Rep. Jim McGovern (D-Mass.) and is scheduled to be voted on this coming Thursday.

So what does the resolution actually promise in substantive terms?

1. Five House Committees Will Be Empowered with Formal Impeachment Authority

The as-of-now untitled and unnumbered House Bill directs “certain committees to continue their ongoing investigations as part of the existing House of Representatives inquiry into whether sufficient grounds exist for the House of Representative to exercise its Constitutional power to impeach Donald John Trump, President of the United States of America, and for other purposes.”

Those certain committees are: (1) the Permanent Select Committee on Intelligence; (2) Financial Services; (3) Foreign Affairs; (4) Judiciary, Oversight and Reform; and (5) Ways and Means.

2. Open Impeachment Hearings Conducted by the Intelligence and Judiciary Committees

The resolution calls for “open and transparent investigative proceedings” that do not hew to current House rules on how hearings are conducted. Under the current rules, representatives on congressional committees are allotted five minutes each to address witnesses. That’s mostly out for the impeachment hearings.

“[T]he chair and ranking minority member of the Permanent Select Committee shall be permitted to question witnesses for equal specified periods of longer than five minutes, as determined by the chair,” the resolution states. “The time available for each period of questioning under this paragraph shall be equal for the chair and the ranking minority member. The chair may confer recognition for multiple periods of such questioning, but each period of questioning shall not exceed 90 minutes in the aggregate.”

“The House already has the proof, now it needs to move public opinion,” he tweeted. “This is how you construct hearings that can do that. Kudos to House Intel members for sacrificing ego to make this happen.”

The resolution, however, notes that the general five-minute rule for committee members returns upon “the conclusion of questioning pursuant to” the lengthy hearing schedule described above.

I look forward to the congressional Republicans criticizing this proposal for providing too _much_ process in an impeachment inquiry. https://t.co/d5skzC4q3U

3. Don’t Expect to Hear Too Much From Trump’s Personal or White House Attorneys

The resolution makes clear that only Representatives Adam Schiff (D-Calif.) and Devin Nunes (R-Calif.)–or one of their staffers–will be able to question witnesses called by the Intelligence Committee.

CNN legal analyst, attorney and impeachment expert Ross Garber scoffed at the resolution’s apparent bar on the 45th president’s attorneys being given a direct say.

“Proposed rules shut Trump lawyers out of participating in open hearing phase, inviting criticism on grounds of fairness, due process and consistency [with] precedent,” Garber tweeted.

“The House authorizes the Committee on the Judiciary to conduct proceedings relating to the impeachment inquiry,” the resolution notes “…including such procedures as to allow for the participation of the President and his counsel.”

Garber dismissed that as likely too-little, too-late because “presumably evidence will have been gathered by then.”

4. Republicans Will Have Very Little Input

The resolution allows House Republicans to suggest potential witnesses, interrogatories or subpoena requests–but those will have to be done in advance; in writing; and they are subject to approval by House Democrats.

The relevant portion of the resolution spells this out:

Per the resolution, Schiff will make the initial call on whether or not a GOP witness, subpoena or interrogatory will be allowed during the Intelligence Committee phase. Similarly, Rep. Jerrold Nadler (D-N.Y.) will make such decisions during the Judiciary Committee phase.

If either Schiff or Nadler decline a GOP attempt, then Nunes–or Rep. Doug Collins (R-Ga.) on the Judiciary Committee–will be able to bring their vetoed witness, interrogatory or subpoena suggestion up to the full committee for a vote. But seeing as each committee is run by Democrats, it seems unlikely that any Schiff or Nadler vetoes will be overturned by members of their own party down the road.

The resolution provides that the Intelligence Committee will release a public “report setting forth its findings and any recommendations.” Expect that report to be quite long because Schiff is instructed to append “any information and materials the [Intelligence] Committee may deem appropriate with respect to the investigation.”

The Intelligence Committee report will be prepared “in consultation with the chairs” of Foreign Affairs and Oversight and Reform. The Schiff report will be subject to “appropriate redactions to protect classified and other sensitive information.” As for the unofficial findings? The resolution notes that “supplemental, minority, additional, or dissenting views” will be filed under the general rules of the House of Representatives.

After the Intelligence Committee releases its report, the Judiciary Committee is tasked with constructing the final charges, if any, of impeachment. The resolution simply notes:

The Committee on the Judiciary shall report to the House of Representatives such resolutions, articles of impeachment, or other recommendations as it deems proper.