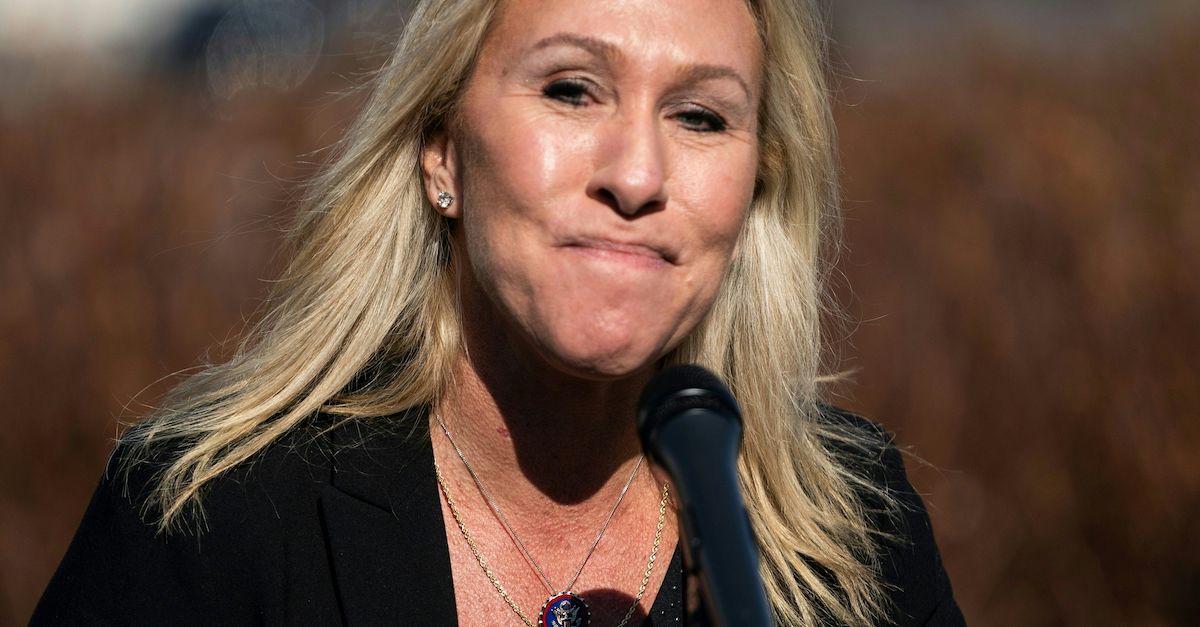 Rep. Marjorie Taylor Greene (R-Ga.) was accused by political and legal observers of threatening a key “material fact witness” Democrats were poised on Saturday to call — but ultimately did not call — in the ongoing impeachment trial of former President Donald Trump.

On Friday evening, Rep. Jaime Herrera Beutler (R-Wash.) issued a statement corroborating a recently-reported conversation between Trump and Minority Leader Rep. Kevin McCarthy (R-Calif.). That conversation allegedly occurred during the attack on the U.S. Capitol Complex and paints the 45th president in an unflattering light.

“In my January 12 statement in support of the article of impeachment, I referenced a conversation House Minority leader Kevin McCarthy relayed to me that he’d had with President Trump while the January 6 attack was ongoing,” Beutler wrote.

When McCarthy finally reached the president on January 6 and asked him to publicly and forcefully call off the riot, the president initially repeated the falsehood that it was antifa that had breached the Capitol. McCarthy refuted that and told the president that these were Trump supporters. That’s when, according to McCarthy, the president said: ‘Well, Kevin, I guess these people are more upset about the election than you are.”

The Senate ultimately voted 55-45 in favor of calling witnesses. Five Republicans voted against the majority of their party in the headline-grabbing vote.

Greene, a QAnon adherent who has since denounced broad swaths of the conspiracy theory’s core tenets, quickly took to Twitter to criticize Beutler.

“The gift that keeps on giving to the Democrats,” the Peach State Republican tweeted. “First voting to impeach innocent President Trump, then yapping to the press and throwing @GOPLeader under the bus, and now a tool as a witness for the Democrats running the circus trial. The Trump loyal 75 million are watching.”

Legal experts pounced on the tweet and said it contained the hallmarks of an attempt to intimidate Beutler so that she would not testify.

That characterization prompted a swift upbraiding by attorney and policy guru Jeff Hauser.

“Define ‘borderline,'” he said. “This is mafia movie behavior.”

Greene’s comments were widely pilloried on Twitter—with many of the platform’s users accusing her of threatening Beutler and further inciting violent conduct.

Other legal experts also signed off on the logic — especially given the events of Jan. 6:

“I would think witness intimidation,” Rangappa replied. “Remember when Matt Gaetz did something similar? So did Trump, with Michael Cohen.”