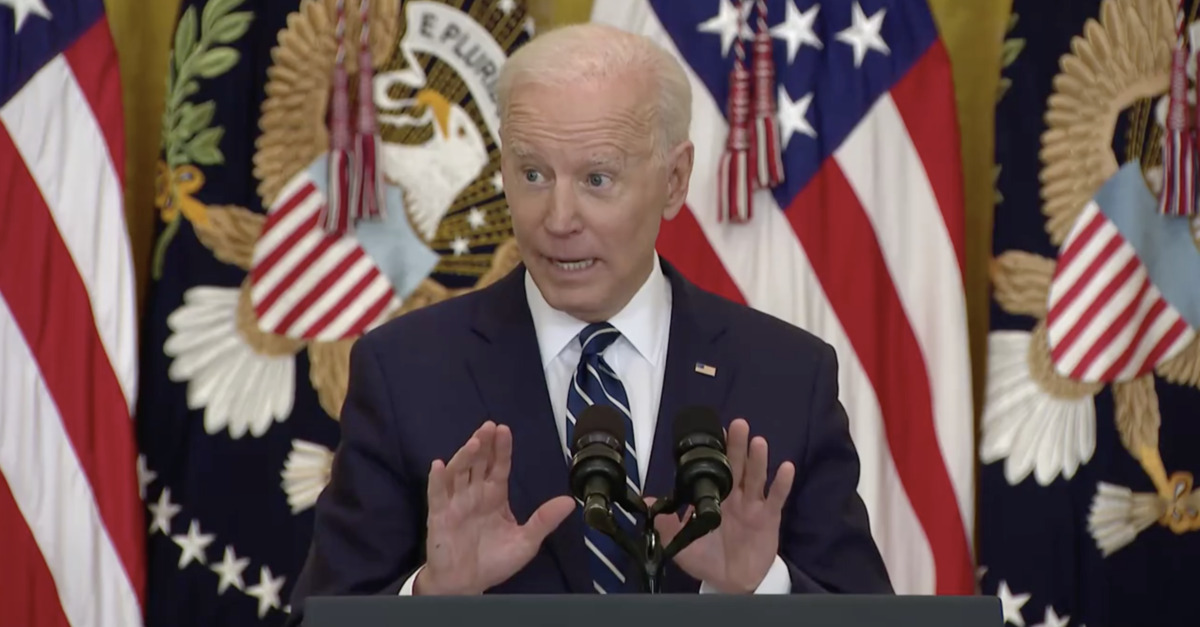 The American Civil Liberties Union (ACLU) is set to go to war with the Biden White House over its continued and expanded use of a Trump Era policy that allows government agencies to quickly deport immigrants. The newly combative stance comes after President Joe Biden said during a Thursday afternoon press conference that immigrant families at the U.S.-Mexico border “should all be going back.”

Biden’s comments came after a reporter asked a question about immigration in terms of the 46th president’s perception “as a moral, decent man” who immigrants trust “with unaccompanied minors.” Biden rejected the framing of the question and correctly noted there is no evidence of an immigration surge. The president explained that human immigration patterns are cyclical year after year and that new arrivals at the nation’s southern border during the winter months were higher under the tenure of former president Donald Trump.

Pressed to clarify how and why certain immigrant families are being allowed to stay in the country, Biden cited Mexico’s own opposition.

American Civil Liberties Union attorney Lee Gelernt, the lead attorney in the major family separation lawsuit against the Trump administration, castigated Biden over his plans to expel all immigrant families via Twitter and in statements to the media.

“We put our Title 42 case for families on temporary hold in exchange for good faith promise to negotiate,” Gelernt told Law&Crime. “But the president JUST said his hope is that the U.S. wants to expel ALL families if Mexico will allow them. Then litigation may be only choice.”

The law at issue here is the Public Health Service Act, which is located in Title 42 of the U.S. Code. The Trump administration began using Title 42 to immediately expel immigrants arriving at the border by using the law to claim the COVID-19 pandemic necessitated such deportations. The ACLU began litigating against Title 42 in the spring of 2020 — calling the use of the law “unprecedented and unlawful.”

Additional lawsuits against the use of Title 42 have been filed by the ACLU and others. They argue that the novel policy connected to the pandemic is illegal because it violates U.S. asylum laws and international treaty obligations. The biggest lawsuit against the policy was put on hiatus by advocates after the Biden administration signaled a willingness to negotiate.

Biden’s Thursday comments, however, signal the opposite. Biden intends to not only extend the use of Trump’s policy viz. Title 42 but also to expand its reach.

“Biden’s comments may have blown up any hopes to negotiate a litigation compromise on Title 42 for families,” Aaron Reichlin-Melnick, policy counsel at the American Immigration Council, noted via Twitter. “Also pretty clear that Biden’s comments reveal that Title 42 is not about public health but is instead political. Going to be hard to argue otherwise in court.”

Originally filed in August of last year with Trump appointee Chad Wolf as the named defendant in the D.C. District Court, the case was appealed to the D.C. Circuit in late November. Department of Homeland Security Secretary Alejandro Mayorkas was swapped as the named defendant earlier this year. On March 1, a joint motion to hold briefings in abeyance — or pause the lawsuit — was filed and agreed to the very next day. The docket hasn’t seen any action since. Until today.

Less than two hours after President Biden made his anti-immigration stance known, the ACLU’s détente with the nascent administration’s deportation machine was all but over.

Originally noted by Congressional Quarterly and Roll Call immigration reporter Suzanne Monyak, Gelernt quickly filed a notice of appearance in the ongoing case against Title 42 which is stylized as P.J.E.S. v. Alejandro Mayorkas, et al.  Thus, the case is once again gaining momentum.