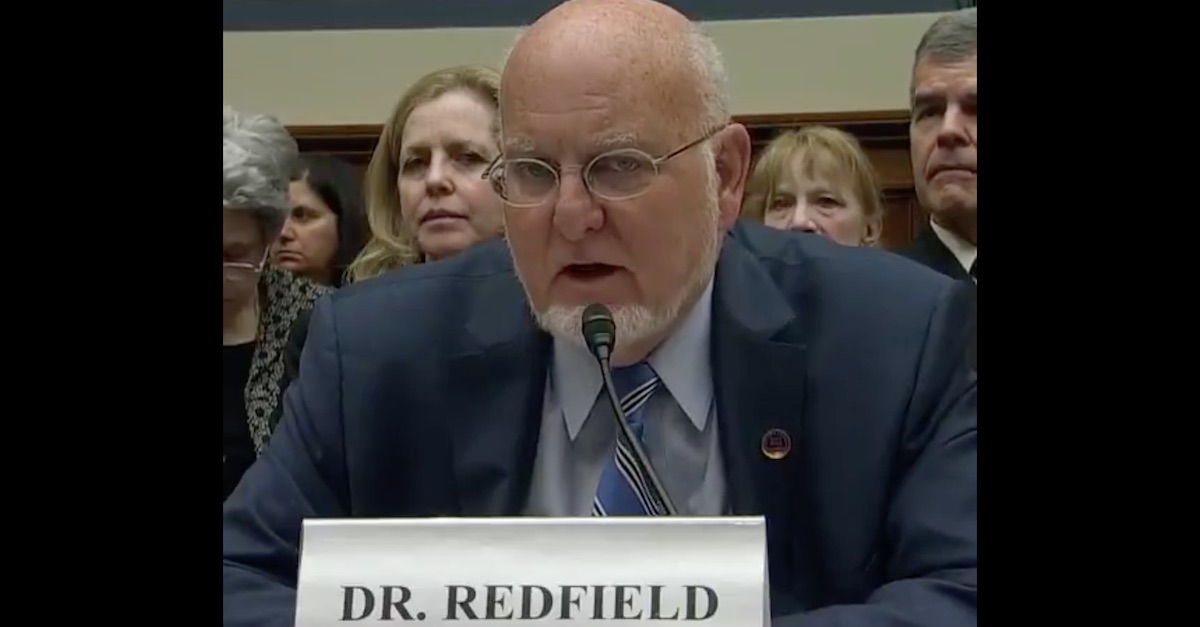 The head of the Center for Disease Control and Prevention (CDC) on Thursday committed to invoking a rarely used federal regulation allowing him to authorize free coronavirus testing for every American, regardless of their insurance status. During Thursday’s congressional coronavirus hearings, Dr. Robert Redfield affirmed he would do so after facing an intense line of questioning from Democratic Rep. Katie Porter (D-Calif.), who refused allow the CDC director to equivocate in his response.

The contentious exchange, which lasted nearly six-minutes, began with Porter using a whiteboard to illustrate that the average out-of-pocket cost for a high-risk individual to visit the emergency room and get tested is more than $1,300 – a figure she noted would discourage many from finding out whether they had the contagion.

She then transitioned to asking Redfield about his familiarity with 42 CFR § 71.30, noting that she had confirmed with his office on Wednesday that the statute was going to be questioning him about the statute.

Porter, a former tenured law professor at the University of California, Irvine School of Law, explained that under § 71.30, the Director of the CDC has the “sole discretion” to “authorize payment for the care and treatment of individuals subject to medical examination, quarantine, isolation, and conditional release.”

After Redfield confirmed his familiarity with the regulation in question, Porter tenaciously sought to confirm that Redfield would use this authority.

I did the math: a full battery of coronavirus testing costs at minimum $1,331.

I also did the legal research: the Administration has the authority to make testing free for every American TODAY.

I secured a commitment from a high-level Trump official that they’d actually do it. pic.twitter.com/RmolCtmNbG

“Doctor Redfield, will you commit to the CDC–right now–using that existing authority to pay for diagnostic testing free to every American regardless of insurance?” Porter asked.

An evasive Redfield responded, “we’re going to do everything to make sure everyone can get the care they need,” but Porter cut him off.

“Nope. Not good enough,” she interjected, again explaining that he had the existing authority to authorize free testing and repeating her question and emphasizing that she was looking for a “yes” or “no” answer.

“What I’m gonna say is, I’m going to review it in detail with,” Redfield said, before Porter again stopped him.

Porter pointed out that she and several colleagues had sent him a letter last week, asking if the CDC planned to invoke the existing authority.

Redfield said the CDC was working with HHS to “see how we operationalize that,” but Porter was still not satisfied with that.

“Dr. Redfield you don’t need to do any work to operationalize, you need to make a commitment to the American people so they come in to get tested. You can operationalize the payment structure tomorrow,” Porter said, apparently tearing down the last of Redfield’s defenses.

“I think you’re an excellent questioner, so my answer is yes,” Redfield stated.