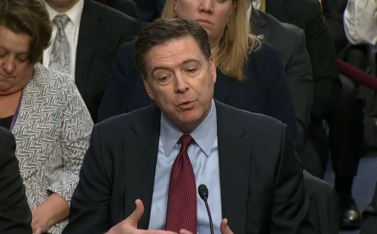 FBI Director James Comey told Congress on Tuesday that he was personally involved in the Hillary Clinton e-mail investigation to ensure the agency had all the resources necessary to conduct its investigation independently.

Director Comey was on Capitol Hill to testify before the House Judiciary Committee about the Apple encryption matter, but Rep. Steve Chabot (R-OH) still managed to slip in a few questions about the Clinton investigation during the hearing.

Chabot first made mention of a recent comment by FBI general counsel, James Baker, who acknowledged that the FBI was working on matters related to Hillary Clinton’s use of a private e-mail.

He then continued to preface his question by pointing out recent remarks from White House Press Secretary Josh Earnest that seemed to downplay the investigation as well as when President Obama appeared on 60 Minutes in October and said he hadn’t seen any “national security implications” in Clinton’s e-mails.

“Is there anything that you can tell us as to when this matter might be wrapped up one way or the other?”  Chabot asked, after noting the considerable importance of the matter.

Here is Director Comey’s response, according to The Hill:

“I can’t, congressman, as you know we don’t talk about our investigations,” Comey responded. “What I can assure you is that I am very close personally to that investigation to ensure that we have the resources we need, including people and technology, and that it’s done the way the FBI tries to do all of it’s work: independently, competently and promptly. That’s our goal, and I’m confident that it’s being done that way, but I can’t give you any more details beyond that.”

Now, a quick personal note about Capitol Hill committee hearings, in general and the issue of whether the FBI can truly conduct an independently — meaning without political influence.

Except for generating the occasional headline for websites like this one, open-door Capitol Hill committee hearings, in both the Senate and the House, have become essentially useless dog and pony shows.  Lawmakers get to puff out their chests and sometimes shout headline making remarks, but nothing of substance is generally learned at these hearings.   They seem to be used mostly as public shaming sessions for cocky drug company CEOs and the like.

For example, did anyone really expect Director Comey to answer that question differently?  I think it would’ve been wonderful had he come out and said, “You know what?  The White House is putting all sorts of pressure on me to not return an indictment against their party’s presumptive nominee to run for president in November.”  But that was not going to happen — even if it was the truth — at least not yet.

And speaking of “truth” as it relates to the Hillary Clinton e-mail investigation, I actually do believe that Director Comey is sincere when he says that he is staying close to the Clinton investigation to ensure that it is done properly and without political interference.  Everyone that I have ever heard speak about James Comey says that he is stand up guy who won’t buckle to political pressure.  When you look at his record, you begin to understand why.

Pretty much everyone that closely follows politics and national security policy has heard the story from 2004 of then deputy Attorney General Comey rushing to then Attorney General John Ashcroft’s hospital room to stop him from reauthorizing the Bush Administration domestic surveillance program after the DOJ determined it was illegal.

Also in 2004, Comey played a big role in the investigation of former president Bill Clinton’s National Security Advisor, Sandy Burger, who pleaded guilty to removing and destroying classified material from the National Archives related to the handling of terrorism threats in the final years of the Clinton Administration.  (What is it with Clinton’s and their aides and classified materials?)

“We take issues of classified information very, very seriously,” Comey told reporters at the time of the Burger incident. “It’s our lifeblood, those secrets.”

It has been reported several places that Comey wanted bring tougher charges against Gen. David Petraeus for his mishandling of classified material.

These serve as a few examples of why I am willing to give Comey the benefit of the doubt — at least until proven otherwise.  His past willingness to stand up to White House political pressure gives me hope that he will do it again in the event this White House ever pressures him to not recommend charges against Clinton.

He was willing to stand on principal even if it meant blowing up the Bush Administration, so it gives one hope that he would be willing to do the same to the Obama Administration/Clinton candidacy — just don’t expect it to happen at a Congressional hearing.