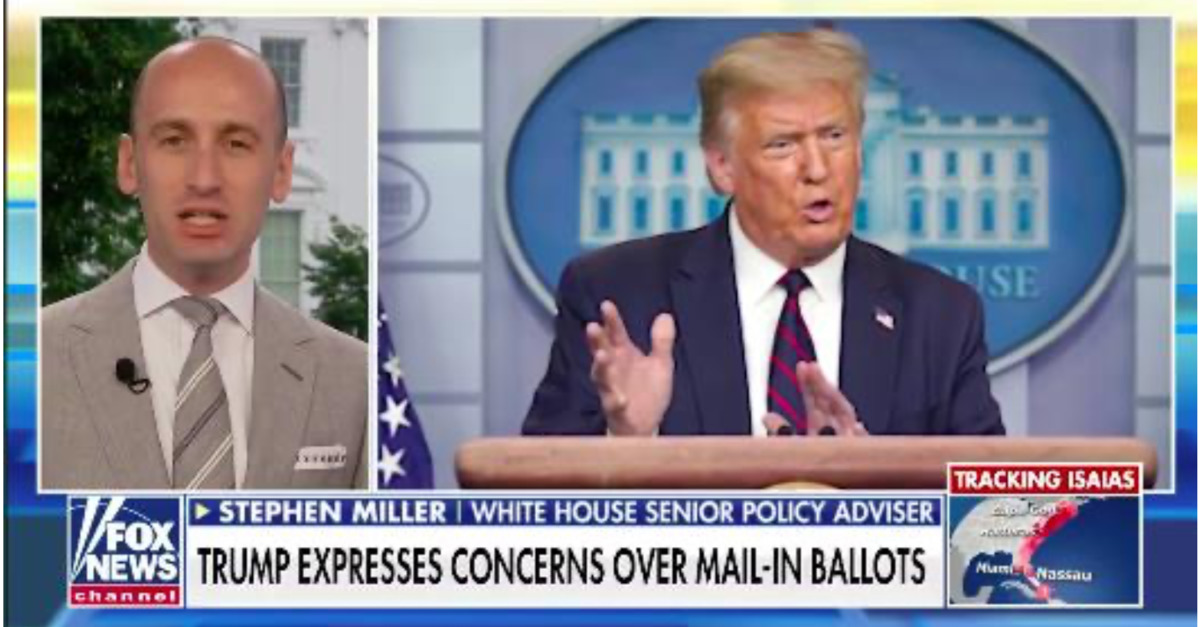 Senior Policy Advisor to the President Stephen Miller probably violated federal law during a recent appearance on Fox News — according to a nonprofit government watchdog organization.

Citizens for Responsibility and Ethics in Washington (CREW) filed a formal complaint with the Office of Special Counsel accusing Miller of violating the Hatch Act over comments he made that were critical of presumptive Democratic presidential nominee Joe Biden.

During his answer, the White House advisor said:

Well as you know Joe Biden is stuck in a basement somewhere and he just emerges every now and again and somebody hands him a note card and he says whatever his 23-year-old staffer tells him to say and then, he dutifully disappears to be seen a week later. As for former President Obama the reality is that for eight years he delivered nothing but failure and betrayal to the people of this country…

CREW claims those above-cited comments took Miller’s appearance from the realm of the acceptable and into a violation of federal law.

The Hatch Act generally prohibits electioneering activities by executive branch employees. Spread across several different statutes, the law essentially states that such employees are barred from using their “official authority or influence for the purpose of interfering with or affecting the result of an election.” The law defines “political activity” as anything “directed toward the success or failure of a political party, candidate for partisan political office, or partisan political group.”

“Stephen Miller likely violated the Hatch Act in his July 31, 2020 interview on Fox News by impermissibly mixing official government business with political views about Biden,” the CREW complaint alleges. “There is no doubt that Miller was speaking in his official capacity. This appearance was similar to conduct [the Office of Special Counsel] has previously found to violate the Hatch Act. Miller engaged in an interview about official government business including the administration’s policy related to voting by mail and the deployment of federal agents to Portland and other cities across the country.”

“This administration continues to use its official powers improperly to assist the president’s re-election and to chip away at the checks and balances that preserve our democracy,” CREW Executive Director Noah Bookbinder added in a statement. “It is well past time for those like Stephen Miller, who show an open disdain for ethics laws like the Hatch Act and who illegally use official resources to promote the president’s re-election bid, to be held accountable for their actions.”

During his interview, Miller was identified by the Fox News chyron as a “WHITE HOUSE SENIOR POLICY ADVISOR.”

And that, CREW alleges, makes the case against Miller even more persuasive.

“Miller was standing on the White House grounds when he made these statements, and both the host and the Fox News chyron identified Miller by his name and official title,” the complaint continues. “Given these facts, Miller used his official position, authority, and title while answering these reporters’ questions.”

Senior Advisor Stephen Miller: Obama and Biden delivered “failure and betrayal” to the people of this country pic.twitter.com/2OtfBXa3MM

This promotion was important, CREW alleges, because it evidences the political intent of Miller’s remarks.

The filing goes on to analyze the matter viz. the statute:

There is also no doubt that Miller’s statements were aimed at influencing the success or failure of a candidate in a partisan election. Miller responded to a question specifically prefaced as “political” in nature related to Biden by attacking the presumptive Democratic nominee for president as being stuck in the basement and taking direction from young staffers. Then he expanded on his comments by pivoting to a critique of the alleged “failure and betrayal” by President Obama. Although he does not explicitly mention Biden in his attack on Obama, the implication is quite clear that his remarks were meant to denigrate Biden as well. That implication is made obvious by the Trump campaign’s official Twitter account clipping and posting Miller’s comments within hours, with the caption, “Senior Advisor Stephen Miller: Obama and Biden delivered ‘failure and betrayal’ to the people of this country.”

CREW is calling for an immediate investigation into Miller’s appearance and the dispensation of “any appropriate disciplinary action against Miller, up to and including instituting disciplinary proceedings against him in the Merit Systems Protection Board.”