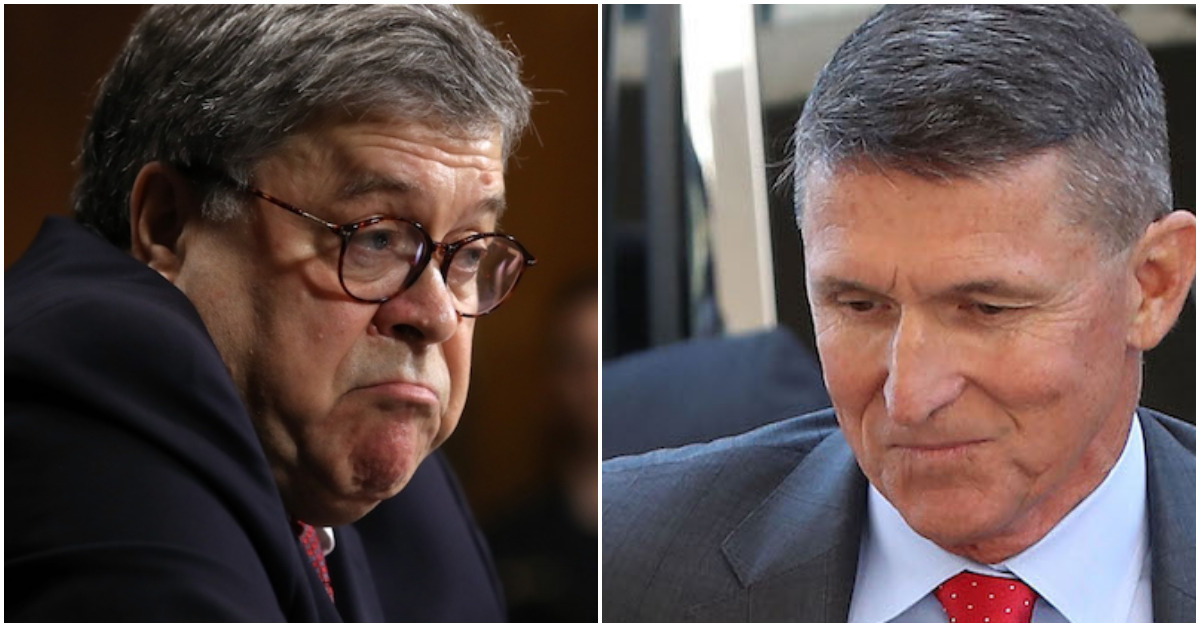 After we learned on Thursday that former lieutenant general and one-time national security advisor Michael Flynn is probably free and in the clear, attorneys lamented the “shocking” manner in which Attorney General William Barr openly gave favorable treatment to a “crony” on President Donald Trump’s behalf.

“Even for Bill Barr this is shocking,” former federal prosecutor and current Westchester District Attorney candidate Mimi Rocah told Law&Crime via email. “Corruption of the powers of DOJ in broad daylight. There are two tiers of justice at least — Trump cronies and then everyone else. This would not happen with any other American in any other case with these facts.”

National security attorney Bradley P. Moss offered a brief assessment of the Flynn news in an email to Law&Crime.

“Let no one tell you crime doesn’t pay when you’re in Donald Trump’s inner circle of friends,” he said.

Whistleblower attorney and critic Harry Litman remarked on the government shuttering Flynn’s case after all the procedural history:

just infuriating. he pleaded guilty. he said he was guilty. the crime was serious. it endangered national security. there were other possible charges. completely revolting. https://t.co/Ojnc7VppJj

“The DOJ filing here is absurd and contradicts the Department’s long standing positions,” noted Susan Hennessey, executive editor of the Lawfare national security law blog. “There is no reasonable explanation here other than that Bill Barr is seeking to undo the [Robert] Mueller investigation on behalf of Trump while the world is distracted by a deadly global pandemic.”

“There is *nothing* in the FBI documents that supports an accusation Flynn was set up or that the FBI wasn’t pursuing valid investigative purposes using valid investigative means,” Hennessey tweeted earlier. “Flynn knowing and intentionally committed multiple crimes (both [lying to federal agents] and FARA) and admitted to them.”

Indeed. Flynn struck a plea deal with federal prosecutors in December 2017 after admittedly lying to federal investigators. His admission and promise to cooperate was one of the most high-profile wins for the probe into election interference and obstruction of justice led by then-special counsel Mueller. In fact, Flynn pleaded guilty twice.

But the whims of the White House and its agents have long been hungry for wins of their own. The motion to dismiss Flynn’s charges is sure to be seen by the 45th president as a clear exoneration of his own position–even though he initially fired Flynn for lying to Vice President Mike Pence in the first place.

Mark Zaid, an attorney who was part of the Ukraine/intelligence community whistleblower’s legal team, took stock of the norm-shattering standard that the dismissal of Flynn’s case represents.

“Message sent here is unbelievable,” he noted via Twitter. “Dropping criminal prosecution AFTER guilty plea? One of two things should happen: (1) either career DOJ officials should publicly resign in protest or (2) [government] officials should be prosecuted/disciplined for something [because this] cannot be explained.”

“If someone improperly prosecuted Flynn, then they should be disciplined,” Zaid later suggested in a long-shot bid to preserve some semblance of the rule of law. “I don’t believe they did, but either it was proper or improper. There should be no grey here.”

In fact, one of the lead prosecutors on the Flynn case preemptively resigned–apparently in protest–earlier Thursday afternoon.

Civil Rights attorney Sasha Samberg-Champion offered an aerial perspective of the forces at work in an email to Law&Crime:

I don’t have any opinion on the merits or propriety of the Flynn investigation and prosecution itself. But it is abundantly clear that the DOJ is not treating Flynn like it would most defendants who lied to the FBI. It’s instructive to compare this case with the Bridgegate conviction that the Supreme Court unanimously reversed this morning. Typically the DOJ has no qualms about aggressively prosecuting defendants who refuse to cooperate even if that requires somewhat creative legal interpretations of broad but ambiguous statutes. Suddenly it’s worried that it might not be able to show “materiality?” I think the noisy withdrawal of the career prosecutor on the case tells you most of what you need to know about what’s going on here.

Much of the lawyer-led grousing was directed at Barr himself.

“Bill Barr has taken the measure of the House of Representatives, the Resistance’s midterms accomplishment, that ostensible bulwark against lawless authoritarianism,” attorney Jeff Hauser tweeted. “Barr has come to a clear-eyed assessment. The House is meaningless. Trump’s DOJ makes [Richard] Nixon‘s appear apolitical.”

“Friends, I cannot overstate how dangerous this is,” warned former secretary of labor Robert Reich. “Under William Barr’s stewardship, the Justice Department has become nothing more than a political tool for Trump to wield against his enemies and withdraw against his friends. This is how dictatorships are built.”

“Totally unjustified and purely partisan,” Harvard Law Professor Laurence Tribe told Law&Crime and via Twitter. “Just goes to show that a president with a sufficiently corrupt and compliant Attorney General needn’t even bother to abuse his pardon power to bail out his loyal henchmen.”

Lawfare’s Hennessey also noted that Barr’s move to free Flynn was likely in the offing for quite awhile.

“Barr tested waters in interfering with Stone sentencing,” she tweeted. “Remember the calls for his resignation, the internal revolt at Main Justice? Remember how Barr just waited it out? He got away with that. So now he’ll do this and wait out the outrage once again. Then onto the next abuse.”