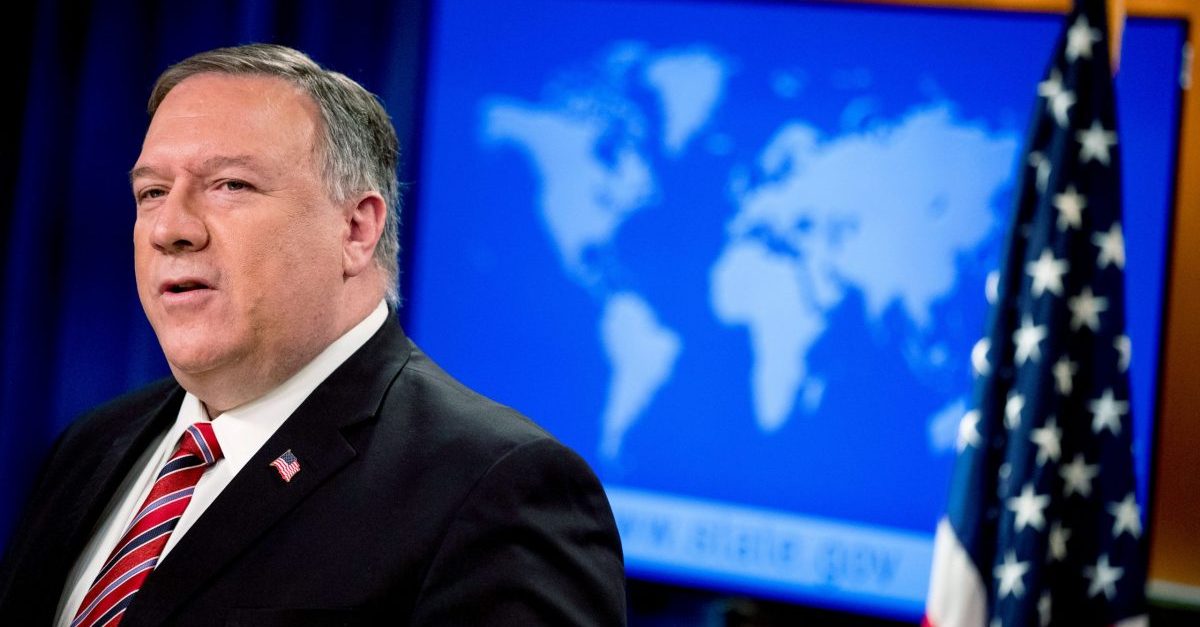 Secretary of State, attorney, and Harvard Law graduate Mike Pompeo, during a phoned-in appearance on CNBC, uttered a head-scratching take on the nature of circumstantial and direct evidence on Thursday. The topic of discussion was whether the Chinese government was cooperating with international efforts against the coronavirus.

CNBC’s Joe Kernen referred Pompeo to recent comments from Sen. Tom Cotton (R-Ark.) about purported “increased” evidence that the novel coronavirus originated in a laboratory in China. Per Kernen’s paraphrasing of Cotton’s comments, perhaps the virus wasn’t engineered; rather, perhaps it escaped.

“The evidence right now is circumstantial and probably will never be anything more than circumstantial, so I’m just wondering whether you have something that’s not circumstantial — or whether it’s helpful — when all China is going to do is say that’s misinformation from you,” Kernen asked in a relatively convoluted question which attempted to acknowledge that China would dismiss anything Pompeo said, anyway.

Pompeo’s response was this: “One man’s direct is another man’s circumstantial.”

He went on to say the virus originated in Wuhan and that he was working to get Chinese Communist party officials to identify where the outbreak began. “This is about protecting Americans tomorrow,” Pompeo said, but admitted the right people “still don’t know the origins of this virus.”

Pompeo bemoaned a lack of transparency from China and insinated the Chinese were hiding the truth.

“Only the Chinese Communist party has in its possession information about where the virus originated,” he said, then added this was “not the first time” there has been a viral outbreak. Then came more platitudes out of the handbook for government cliches: “This is serious business,” there has been “enormous economic pain,” we’re suffering the effects of a “quarter million lives destroyed,” and the Chinese government has an “obligation” to help solve the problem.

“A quarter of a million lives destroyed as a result of what happened in Wuhan,” Sec. of State Mike Pompeo says. “The Chinese government has an obligation to help us figure out how to make sure there aren’t increased lives lost as we move forward.” https://t.co/CyaM5ZiTF3 pic.twitter.com/OxxjjHFfm2

What’s legally troubling, though, is that Pompeo amalgamated “direct” and “circumstantial” evidence the way a stand mixer tears through cake batter. The policy implications of this alloy of evidence are profound.

Whether litigation requires direct evidence or merely subtantial circumstantial evidence has frequently been the subject of litigation before the U.S. Supreme Court in discrimination law cases. Direct evidence of discrimination — “my boss specifically told me he fired me because of my age,” for instance, to raise a hypothetical — is naturally hard to come by. Circumstantial evidence is oftentimes plentiful but is open to debate as to what it really means. In other words, though it can shove the needle of relevance, the movement is frequently slight; the utlimate probative value of circumstantial evidence is all too often weak.

And therein lies the rub: Pompeo’s attempt to conflate direct and circumstantial evidence is a problem. The two are distinct, like oil and water, and attempting to build an iron-clad policy against China based on “circumstantial” evidence — which “one man” might consider “direct,” to use his own words — ought to be perceived with at least some trepidation. It represents an attempt from a policy perspective to make something seem stronger than it really is.

Trial juries are usually and rightfully cautious to convict on circumstantial evidence, and when prosecutors present only it, they know they generally have to present a lot of it. Prosecutors who oversell their circumstantial cases run the risk of losing. Pompeo’s off the cuff comments should be viewed through similar lenses.

Harvard Law seems to be churning out a bunch of graduates who understand very little about the law or the Constitution.

What a dope. Pompeo’s got nothing. He’s maintaining the Wuhan lab story because he thinks Trump likes it.

Pompeo: Direct and circumstantial evidence can be the same thing.

Harvard Law: We would like our law degree back please. https://t.co/qHQnm907Og

Direct ≠ circumstantial.
Not a matter of interpretation. Different concepts, representing an important distinction.
Pompeo and Cotton effectively admitting they've been tossing around serious accusations based on nothing.
China deserves criticism *based on facts*.
Awful strategy https://t.co/bTbJeYHqWP