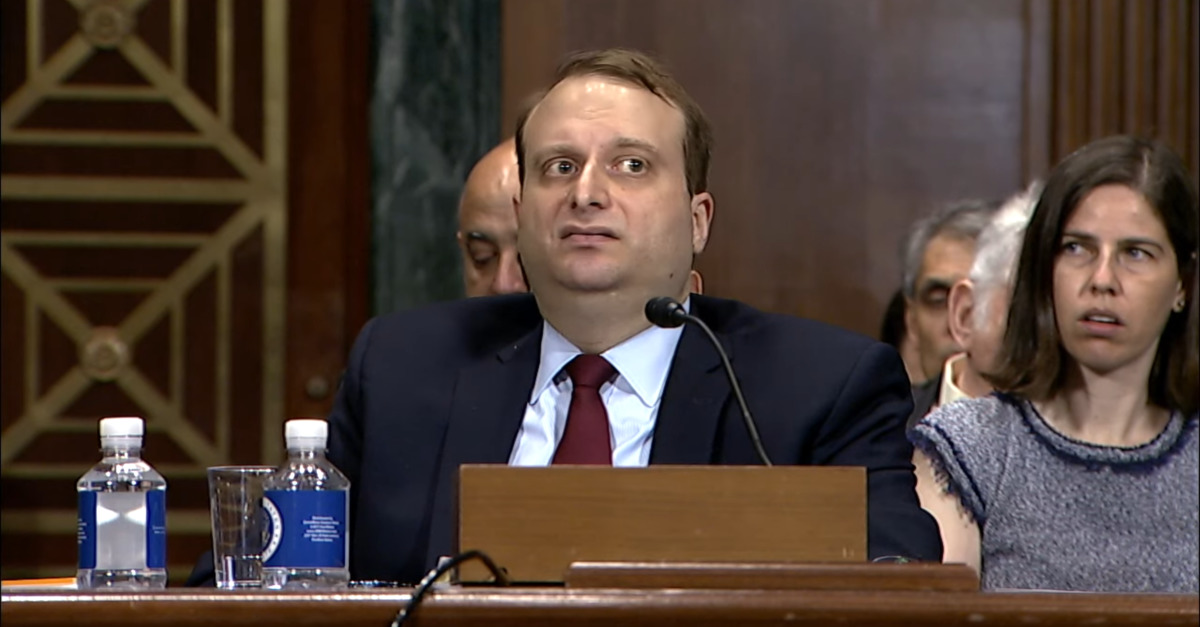 President Donald Trump’s nominee for the Second Circuit Court of Appeals, Steven Menashi, is being heavily criticized by judicial reform and government transparency advocates in the days before the Senate Judiciary Committee is scheduled to votes on whether or not to advance his controversial nomination.

At issue are concerns about Menashi’s role during the July phone call between Trump and Ukrainian President Volodymyr Zelensky. Menashi is a White House lawyer.

Menashi failed to recognize “the Senate’s rights and responsibilities under the U.S. Constitution” by resisting “efforts by members of both parties to find out whether he had worked on particular immigration and education issues as an official within the administration,” the group said. Per Bloomberg:

Democrats and at least one Republican previously criticized Menashi after he failed to answer questions related to his role as a Trump White House lawyer over immigration policies like family separation.

PFAW then slammed Menashi on the alleged Ukraine cover-up:

He made that attitude clear shortly thereafter, when the nation learned that President Trump had sought to pressure the president of Ukraine to interfere in the 2020 election, and that staff members had engaged in a cover-up of notes of a presidential telephone call where that pressure was applied. Because of Menashi’s position in the White House counsel’s office, ten senators sent him written questions asking about any role he may have had relating to the call or how the notes of the call were handled afterward.

Senate Democrats sent Menashi a series of seven overarching concerns related to Ukraine–comprising 22 questions total–on September 27 and gave him a ten-day deadline to provide written answers. As noted above, that deadline whooshed by unobserved.

Several other advocacy organizations went after Menashi for dismissing the senators’ Ukraine-related questions as well.

“Menashi has refused to answer questions about whether he knew about or was involved in the phone call between Trump [and] the Ukrainian president,” the storied Leadership Conference on Civil and Human Rights noted at the time. “He should [not] be promoted to a lifetime seat on the federal bench.”

“Steven Menashi is an already controversial nominee who wouldn’t even answer basic questions about his work in the Trump Administration,” Fallon said in a press release issued late last month. “If he played any part in covering up Trump’s call with President Zelensky, his nomination must be rejected outright. The Senate has a responsibility to get to the bottom of this by convening a follow-up hearing.”

Fallon’s group has ratcheted up pressure on senators in recent days.

Sen. Tillis, Steven Menashi may have helped cover up Trump’s quid pro quo with Ukraine. That should earn your “No” vote. #StopMenashi pic.twitter.com/TOPGJJV819

Steven Menashi may have hidden the Ukrainian whistleblower’s complaint from the American public. Sen. Cruz, your constituents expect you to vote no on Menashi, and we’ll be watching to make sure you do. #StopMenashi pic.twitter.com/dQBlw4Kyrj

“It’s simple: Donald Trump is under an impeachment inquiry because of his call with the Ukranian president, so the lawyer who may have helped him cover it up shouldn’t get a lifetime seat on a federal court,” Demand Justice tweeted on Sunday.

“Menashi is a member of Stephen Miller’s Immigration Strategic Working Group – a group that’s directly responsible for administering the Trump administration’s most draconian anti-immigrant measures,” the Leadership Conference added. “He shouldn’t be rewarded with a [lifetime] seat on the federal bench.”

The committee vote is supposed take place on Oct. 24.