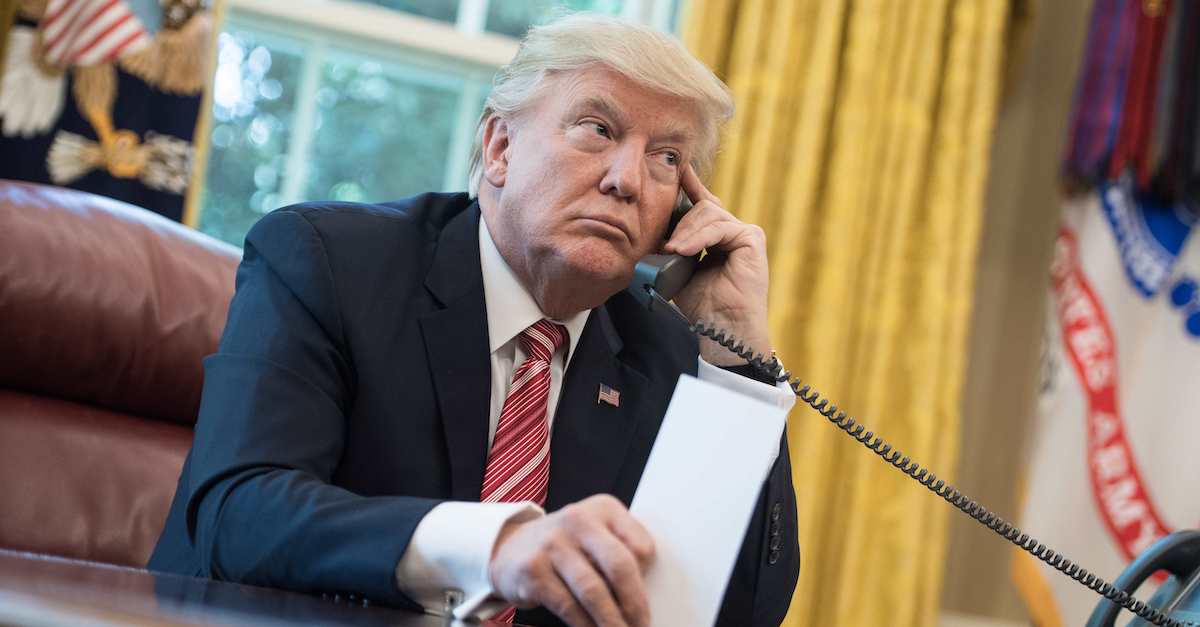 In the final weeks leading up to the 2020 presidential election, Donald Trump’s campaign was in dire need of a cash influx to combat the Biden campaign’s ad buys. The solution, according to a bombshell Saturday report from Shane Goldmacher of The New York Times, was to insert language into donor agreements that set up increasingly opaque recurring charges to donors’ accounts.

Described as an “intentional scheme to boost revenues,” donors had to read through the donation disclaimer’s fine print in order to understand precisely how much money they would be giving to Trump’s campaign. The disclaimer contained several pre-checked provisions which granted the Trump campaign permission to take additional funds from donors’ accounts as time went on. That meant potential donors had to actively scroll through the disclaimer and actively uncheck specific boxes in order to make a simple one-time donation.

In some cases, the campaign also profited from yellow boxes containing pro-Trump messages referred to internally as “money bombs,” according to the report.

For example, one pre-checked box read, in large, boldface type: “This is the FINAL month until Election Day and we need EVERY Patriot stepping up if we’re going to WIN FOUR MORE YEARS for President Trump. He’s revitalizing our economy, restoring LAW & ORDER, and returning us to American Greatness, but he’s not done yet. This is your chance – stand with President Trump and MAXIMIZE your impact NOW!”

Below that boldface type was a line which contained a smaller, non-boldface sentence:  “Make this a weekly recurring donation until 11/3.”

Another pre-checked box also contained several bold sentences asking potential donors to “join Operation MAGA and help me secure VICTORY in November.”  A smaller sentence underneath, unless the prefatory box was unchecked, would allow the campaign to automatically debit an additional $100 from a donor’s account on Oct. 9.

Screen shots are embedded within the tweets below — as is a chart of the economic impact.

You can actually see the impact of these prechecked boxes on Trump's refund rate with this graphic https://t.co/vu10yWJaEs pic.twitter.com/N7bXB9dCx0

The New York Times reported that many Trump donors didn’t realize what was going on until it was too late.

A 63-year-old cancer patient in Kansas City named Stacy Blatt told the Times that he gave $500 to the campaign in September, despite living on less than $1,000 a month, and was completely blindsided by what followed.

“That single contribution — federal records show it was his first ever — quickly multiplied,” the report stated. “Another $500 was withdrawn the next day, then $500 the next week and every week through mid-October, without his knowledge — until Mr. Blatt’s bank account had been depleted and frozen.”

He was forced to seek help from his brother after his utility and rent checks bounced and he learned his account had been drained of $3,000 in under 30 days.

“It felt like it was a scam,” Russel told the Times, adding that the family reported the Trump campaign withdrawals to the bank because it thought Stacy had been the victim of fraud.

Another 78-year-old from California made what she thought was a one-time donation of $990 that wound up costing her more than $8,000.

The plan resulted in the Trump campaign refunding almost eleven percent of what it raised online in 2020, or more than $122 million, a figure that may increase as more claims roll in.

The campaign was also reportedly planned on the strong likelihood that it would have to pay back at least some of the recurring donations — so it used the funds like a loan.

“The recurring donations swelled Mr. Trump’s treasury in September and October, just as his finances were deteriorating. He was then able to use tens of millions of dollars he raised after the election, under the guise of fighting his unfounded fraud claims, to help cover the refunds he owed,” the Times report stated.

“In effect, the money that Mr. Trump eventually had to refund amounted to an interest-free loan from unwitting supporters at the most important juncture of the 2020 race.”

Trump spokesman Jason Miller denied any wrongdoing, telling the Times that the campaign “was built by the hardworking men and women of America, and cherishing their investments was paramount to anything else we did.”