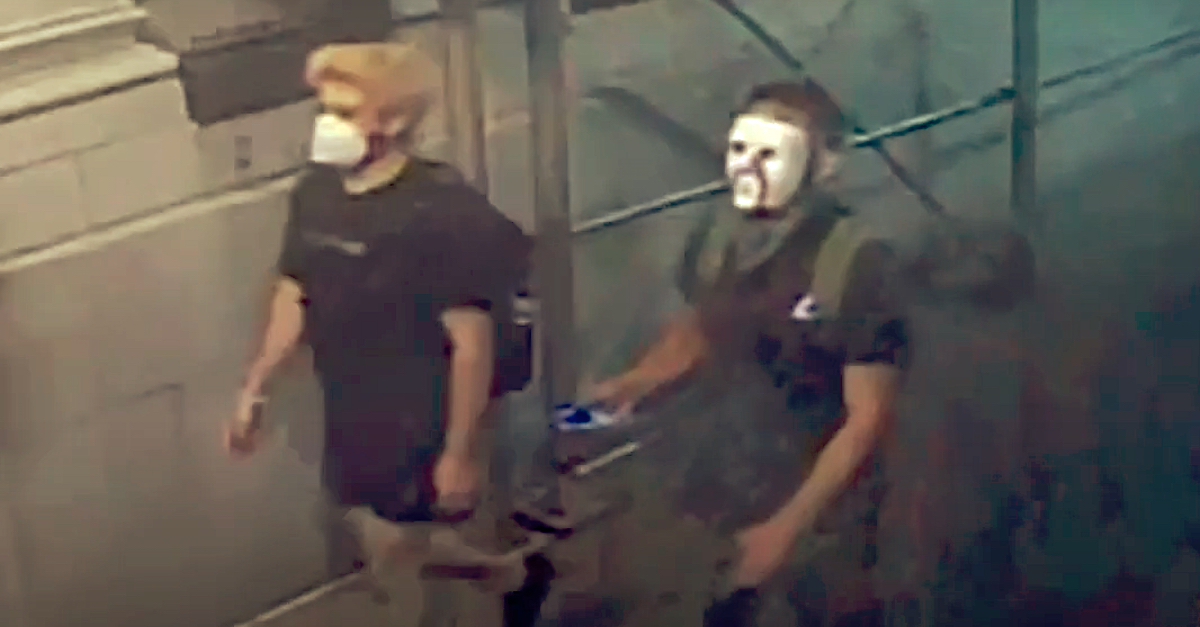 President Donald Trump on Tuesday said the federal government was “tracking down the two Anarchists” accused of defacing a “magnificent George Washington Statute” in New York City on Monday.

“They will be prosecuted and face 10 years in Prison based on the Monuments and Statues Act. Turn yourselves in now!” the president said via Twitter.

We are tracking down the two Anarchists who threw paint on the magnificent George Washington Statue in Manhattan. We have them on tape. They will be prosecuted and face 10 years in Prison based on the Monuments and Statues Act. Turn yourselves in now!

Two statues were defaced Monday in Washington Square Park, the New York Daily News reported, but individuals who threw paint-filled balloons at the monuments at around 3:20 a.m. The statues show Washington as a Revolutionary War general and as the first president of the United States. Critics have noted that Washington owned slaves.

The New York Post reported that one suspect “has blonde hair and was seen wearing an N95 mask, black shorts and a black t-shirt,” while the other “wore a face-covering white hockey mask, a black t-shirt and black jeans.”

The president’s tweet in the case came four days after Trump signed an executive order Friday which called for prosecutions “to the fullest extent permitted under Federal law” for “any person or any entity that destroys, damages, vandalizes, or desecrates a monument, memorial, or statue within the United States or otherwise vandalizes government property.”

“Many of the rioters, arsonists, and left-wing extremists who have carried out and supported these acts have explicitly identified themselves with ideologies — such as Marxism — that call for the destruction of the United States system of government,” the executive order said. “Anarchists and left-wing extremists have sought to advance a fringe ideology that paints the United States of America as fundamentally unjust and have sought to impose that ideology on Americans through violence and mob intimidation. They have led riots in the streets, burned police vehicles, killed and assaulted government officers as well as business owners defending their property, and even seized an area within one city where law and order gave way to anarchy. During the unrest, innocent citizens also have been harmed and killed.”