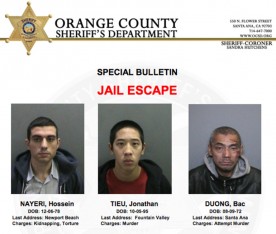 The men were discovered unaccounted for during a check on Friday evening, according to a special bulletin released by the Orange County Sheriff’s Department.  After an immediate search of the Central Jail Complex and adjacent Civic Center, it was determined the inmates had escaped the jail and fled the area.

The three inmates were identified as:  Hossein Nayeri, 37, Jonathan Tieu, 20, and Bac Duong, 43.  All three men were in custody on pending charges for violent criminal acts; Nayeri for kidnapping and torture, Tieu for suspicion of murder, and Duong for attempted murder.

Up to a $1,000 reward for an anonymous tip to OC Crimestoppers leading to their capture. https://t.co/H8wHkHQWfo

A press conference is scheduled for 9:00 AM PST: