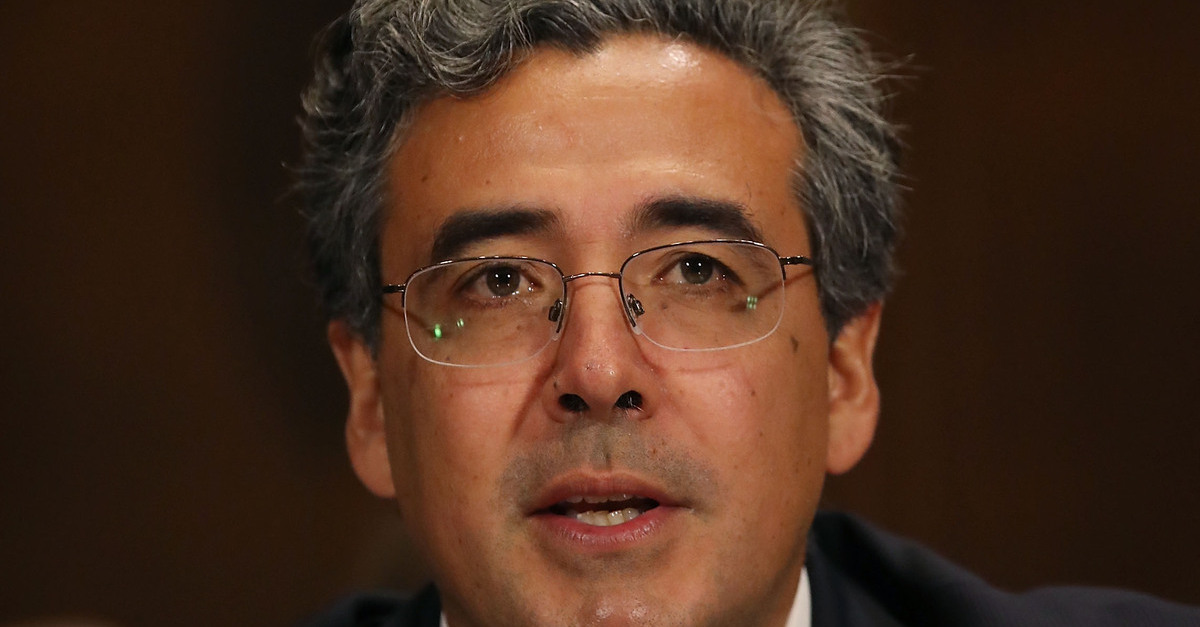 U.S. Solicitor General Noel Francisco is rumored to be stepping down soon–perhaps not coincidentally as the current Supreme Court term comes to its traditional end in late June.

The 50-year-old movement conservative first took the helm of the solicitor general’s office following his departure from global elite Jones Day law firm in late January 2017. After being appointed by President Donald Trump, Francisco initially served as acting solicitor general concurrent with his role as deputy solicitor general for nearly two months before being succeeded by Jeffrey Wall–who served as Francisco’s immediate subordinate for less than one full day.

Francisco’s initial confirmation hearings were all-but scuttled by the political firestorm of the James Comey affair–which happened within days of one another. Francisco was finally confirmed by the U.S. Senate and assumed the formal role of the office in late September 2017.

Since then, he has represented the Trump administration in various hot-button legal disputes before the Supreme Court. While the administration’s track record against Democratic Party attorneys general is significantly worse than its immediate predecessor’s record against Republican counterparts, Francisco has played a significant role in several high-profile wins for the White House.

Buoyed by the increasingly conservative high court, the solicitor general notched a victory on the controversial travel ban targeting Muslim-majority countries as well as multiple other hardline immigration policies pushed by the 45th president.

Francisco has also been instrumental and atypically adept–arguably even dogged–at seeking stays from the Supreme Court that neutralize lower court injunctions. The effect has been continuance of Trump administration policies signed off on by the nation’s conservative justices without an actual assessment of the legal merits. Such stays hold for at least as long as those often lengthy legal controversies make their way back to the high court–oftentimes months or even years later–a form of juridical brinkmanship and a legalistic shell game likely to be emulated by future administrations pushing similarly controversial agendas and initiatives.

Again, the Supreme Court has been overwhelmingly receptive to both entertaining and granting such administrative interventions presumably due to reasons of ideological harmony with the executive power-heavy and conservative policy pushed by the White House.

Francisco imminently leaves with a mixed legacy almost certainly to be remembered more for his deft use of process than anything else. So, what happens when he’s gone?

For the second time, it seems, he’s likely to be succeeded by Deputy Solicitor General Wall–at least in the interim.

According to two anonymous sources cited by CNN, however, Deputy White House Counsel Patrick Philbin “had previously been rumored as a frontrunner for the position.” The outlet also notes that “apparently the succession plan is still in flux.”

That’s nothing new for the Trump administration. Indeed, as noted above, the White House’s use–and arguable abuse–of the Federal Vacancies Reform Act to flout longstanding federal succession rules has proven to be an effective end-run around norms as well as occasionally grueling and embarrassing Senate confirmation hearings. There’s no imagination-stretching necessary to anticipate a similar scenario playing out with Francisco’s replacement.

As for Wall and Philbin, both are also fairly described as movement conservatives in much the same mold as Francisco himself–each attorney previously clerked for conservative Supreme Court Justice Clarence Thomas and for conservative appeals court judges appointed by former president Ronald Reagan.

Philbin infamously co-authored a legal memo with John Yoo which determined the United States could use military commissions to try alleged enemy combatants detained at Guantanamo Bay in Cuba–in the process denying that federal courts lacked any jurisdiction over such detainees and that those prisoners had no right to habeas corpus relief. His opinion was later rebuked by the Supreme Court in the landmark Boumediene v. Bush case.

Philbin later broke with the George W. Bush administration by raising concerns over the Central Intelligence Agency’s unlawful use of torture on alleged terrorists. He was sharply reprimanded and then punished by then-vice president Dick Cheney over that stance, somewhat conspicuously losing out on the position of Principal Deputy Solicitor General.

Philbin also served as one of Trump’s defense attorneys during the 2020 impeachment proceedings in the U.S. Senate.

Something of a Supreme Court lawyer by trade, Wall has already argued 16 cases before the nation’s high court. As the current deputy solicitor general, Wall distinguished himself by arguing for the administration before the Ninth Circuit Court of Appeals over the Muslim ban case stylized as Trump v. Hawaii–queuing up Francisco’s eventual win.

Wall is also a contributor to the right-wing Federalist Society–the organization that has effectively overseen the selection of most of the administration’s federal judicial nominations.