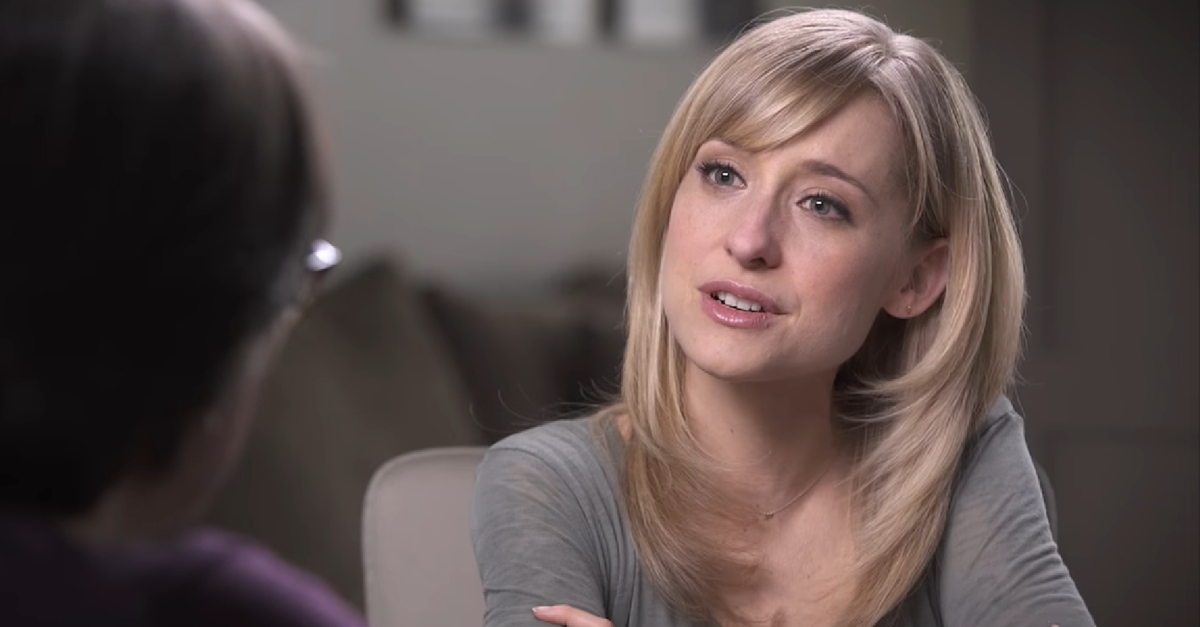 A week before Smallville actress Allison Mack’s sentencing, federal prosecutors revealed previously unknown details about her cooperation against NXIVM cult leader Keith Raniere. She gave the government a recording roughly a month before his trial showing the branding ceremony into the secret sisterhood of sex “slaves” that burned women with the cult leader’s initials.

Prosecutors revealed the extent of Mack’s cooperation for the first time in a memorandum on Monday evening, which argues for some leniency at her upcoming June 30th sentencing in light of her “substantial assistance to the government.”

The memo explores how Mack detailed the inner workings of the “secret sisterhood” of Raniere’s slaves known as DOS, short for Dominus Obsequious Sororium, which was exposed by the New York Times in 2017:

Mack also provided details regarding crimes committed by other first-line DOS “masters,” including assignments to “seduce” Raniere and efforts to find Raniere a virgin “successor.” Mack detailed Raniere’s role in devising assignments for Mack’s“slaves,” including, among other things, Raniere’s repeated requests for nude photographs from Mack’s DOS “slaves”; Raniere’s instructions regarding the “seduction” assignment; and Raniere’s encouragement of the use of demeaning and derogatory language, including racial slurs, to humiliate DOS “slaves.”

Prosecutors call it “highly likely” that Mack’s public guilty plea inspired her co-conspirators to follow suit, noting that Seagram’s heiress Clare Bronfman and NXIVM bookkeeper Kathy Russell did so weeks after she admitted to racketeering and a related conspiracy count. Mack had provided information to the government about Bronfman’s role intimidating DOS victims, prosecutors say.

Mack also provided information regarding Bronfman’s attempts to harass and threaten DOS victims, as well as Bronfman’s efforts to initiate a criminal cybercrime investigation against an individual Bronfman believed to be critical of Raniere and NXIVM. Mack also provided relevant emails, documents and recordings to the government.

Perhaps most significantly, Mack provided the government with a recording that, at trial, served as crucial evidence of Raniere’s role in devising the branding ceremony in which DOS “slaves” were branded with a symbol that, unknown to them, represented Raniere’s own initials.

As described in court documents, that tape showed Raniere apparently instructing Mack on holding women down “almost like a sacrifice” and exerting control over them through “collateral.”

Raniere: Do you think the person who’s being branded should be completely nude and sort of held to the table like a, sort of almost like a sacrifice? I don’t know if that, that’s a feeling of submission, you know. So, [unintelligible]
Mack: Yea
Raniere: Ah, you could also of course videoing it, and videoing it ah from different angles or whatever gives collateral.
Mack: Mmhm
Raniere: So, it probably should be a more vulnerable position type of a thing.
Mack: OK
Raniere: Laying on the back, legs slightly, or legs spread straight like, like feet, feet being held to the side of the table, hands probably above the head being held, almost like being tied down, like sacrificial, whatever.
Mack: OK.
Raniere: And the person should ask to be branded.
Mack: OK
Raniere: Should say, please brand me it would be an honor, or something like that. An honor I want to wear for the rest of my life, I don’t know.
Mack: OK
Raniere: And they should probably say that before they’re held down, so it doesn’t seem like they are being coerced.
Mack: OK

Prosecutors say that the government “was not previously in possession” of that recording, and Mack’s cooperation was “never publicly announced,” though notes from her proffer sessions were provided to Raniere’s defense team under seal.

Mack’s sentencing guidelines range is calculated between 14 and 17.5 years in prison.

Citing her assistance, prosecutors want U.S. District Judge Nicholas G. Garaufis to sentence her below that. Mack’s victims are expected to speak at her sentencing hearing.

Read the government memo below: