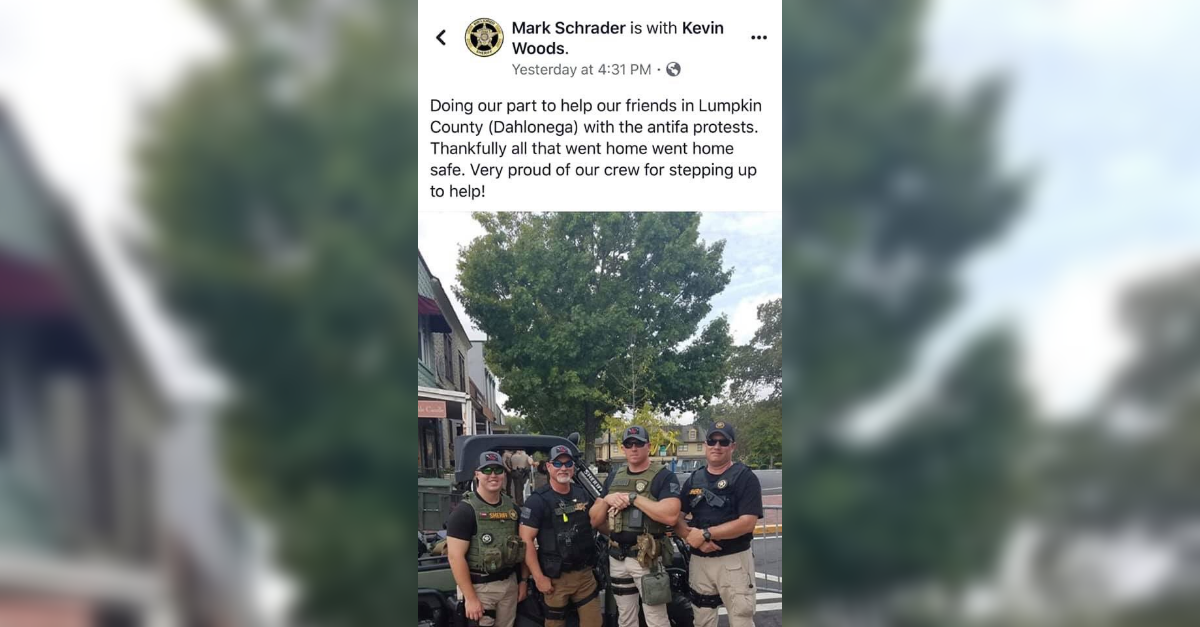 According to the Times Free Press, the four former Democrats hold various positions in Chattooga County government–including Sheriff Mark Schrader. The exodus allegedly occurred after Schrader and his deputies agreed to maintain public order at a September 14 rally organized by white supremacists and billed as supporting Trump.

The rally itself was sparsely attended by open white supremacists–as such rallies typically are. Only about 50 people reportedly attended the event in Dahlonega. There were also roughly three times as many counter-protesters there. Plus 600 members of law enforcement.

Schrader stoked controversy across social media by posting a photo featuring himself and a few of his deputies–all heavily armed and outfitted–with a caption that many understood as supportive of the white supremacist/pro-Trump sentiment and antagonistic toward the anti-fascist and anti-racist opposition to the original rally.

“Doing our part to help our friends in Lumpkin County (Dahlonega) with the antifa protests,” the post read.

A separate post by another law enforcement agency added to the conclusion reached by many that law enforcement was out in force to protect the people who spend their free time burning crosses.

The Lookout Mountain Judicial Circuit Drug Task Force’s Commander DeWayne Brown wrote on Facebook that his team showed up to “help with the antifa protest and patriot rally.”

Backlash on social media was quick, widespread and fierce. Those criticisms were soon echoed by local media in the Peach State.

“The language of policing matters,” noted an analysis in the Atlanta Journal-Constitution. “The above descriptions can be used to bolster white supremacist claims that law enforcement is on their side.”

Brown apparently took the criticism to heart and updated the post:

[A]s it seems as the wording of the original post may have cause some confusion, I would like to clear it up. Lumpkin County Sheriff requested assistance for a rally that was given a permit. The rally was called American Patriot Rally, USA. My agency has no control over the name for the rally permit or who gets it. As for the antifa protest wording, this is the wording I received but yes there were many different counter protesters at the rally. I personally spoke to many including local residents. So yes there were many different persons there for different personal views as counter protesters. I nor my agency has an opinion or support to either side and their views yesterday. We were there to guarantee everyone’s right’s and protect everyone involved…

Schrader, however, complained that he and his deputies received critical comments.

The sheriff said that “some of the comments were taken as threats,” according to the Times Free Press. “Only a few of them, he said, were from local people.” The post was eventually deleted.

And, in a letter dated September 16 and addressed to Chattooga County Democratic Party Chair Brandon Gurley, Schrader tendered his resignation to the party–but not in his role as sheriff.

“I must admit that the comments and threats that you and I spoke about [sic] this past weekend, although only one or two were local, have made me think more deeply on the things that I have been contemplating for some time,” Schrader wrote.

Chattooga County Clerk of Court Kim Windle James also left the party, citing the response to Scharder’s post as the reason why.

“I read Sheriff Schrader’s Facebook post and took it to mean he was there to keep peace during the rally,” James told the paper. “This was a personal decision and it doesn’t affect my job performance. I will always serve Chattooga County to the best of my ability without favoritism to any party.”

Gurley himself was sanguine about the defections.

“We hate to lose them,” he said, “and they did what they felt like they had to do to salvage their jobs.”