Sarah Palin Loses Extraordinary Bid for a New Trial Against the Times, as Appeals Court Says It Will Hear Her Case ‘in the Ordinary Course’ 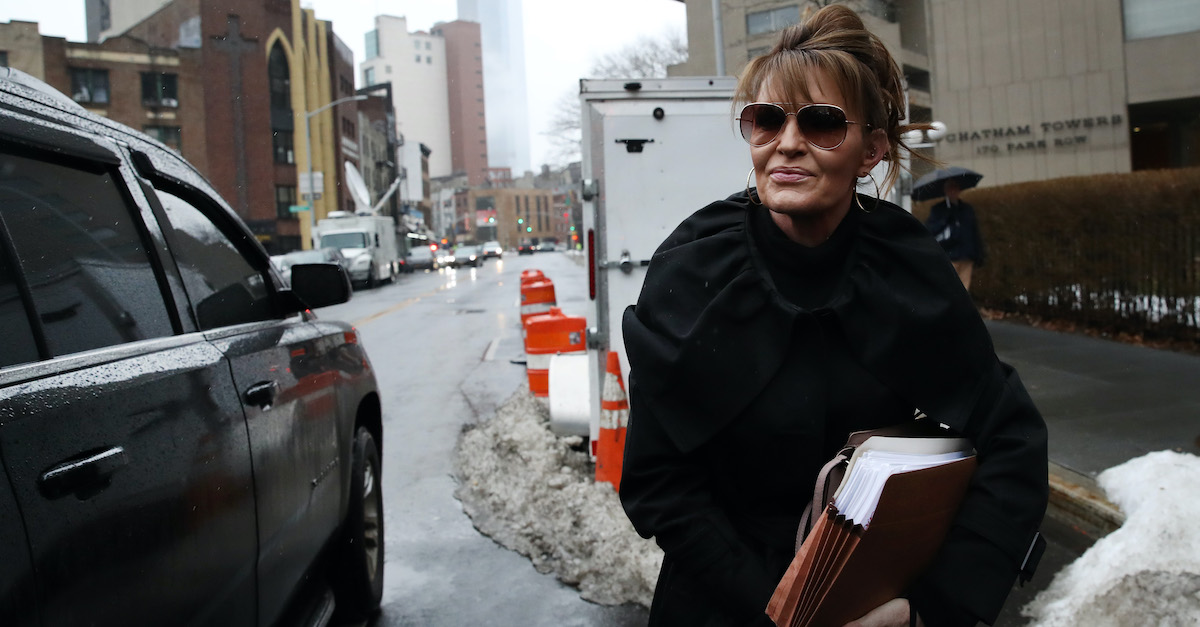 Former Alaska Governor Sarah Palin arrives at a federal court in Manhattan to resume a case against the New York Times after it was postponed because she tested positive for Covid-19 on Feb. 3, 2022 in New York City.

The U.S. Court of Appeals for the Second Circuit rejected Palin’s petition for what is known as a writ of mandamus, seeking extraordinary relief to correct an abuse of discretion. The former Alaska governor’s lawyers claimed that her case rose to that level after Senior U.S. District Judge Jed Rakoff dismissed her case before the jury produced a verdict.

A three-judge panel curtly disagreed, in a single-paragraph summary order.

“Upon due consideration, it is hereby ORDERED that the petition is DENIED because mandamus relief is not warranted under the present circumstances,” the order states. “However, denial of the petition is without prejudice to the issues presented in the petition being addressed in Petitioner’s pending appeal, which will be assigned to a new panel in the ordinary course.”

A different trio of judges will hear the appeal.

Earlier this year on Valentine’s Day, Judge Rakoff ruled that no reasonable jury could find that the Times defamed Palin when it briefly ran a 2017 editorial tying her to Jared Lee Loughner’s massacre.

An earlier draft of the story, which ran for some 12 hours before being corrected, noted that Palin’s political action committee distributed a map that appeared to have stylized crosshairs over the district of Rep. Gabrielle Giffords (D-Ariz.), who was injured in the mass shooting. No link was ever established between the shooting and the map.

Then-editor James Bennet amended the column, with a prominent correction, after others in the newsroom alerted him to the error.

Rakoff found that Palin did not meet the high bar to prove actual malice by showing Bennet had either actual knowledge that the claim was false before publication, or displayed reckless disregard for the truth. The actual malice standard has protected press freedom in the United States since the Supreme Court’s watershed New York Times vs. Sullivan decision in 1964.

The jury agreed with Rakoff’s assessment the next day, finding the Times not liable. Multiple jurors later acknowledged that they had received push alerts about Rakoff’s earlier ruling, but they insisted that it did not factor into their verdict.

Earlier this month, Rakoff rejected Palin’s request for a new trial as “wholly without merit“—and rejected their parallel bid to assign the case to a different judge. The Second Circuit had previously overturned Rakoff’s first decision to dismiss Palin’s lawsuit, having criticized him for conducting an unusual hearing with testimony by Bennet.

Such fact-gathering usually occurs during the discovery phase, which had not begun before the motion to dismiss had been decided.

Read the Second Circuit’s order, below: