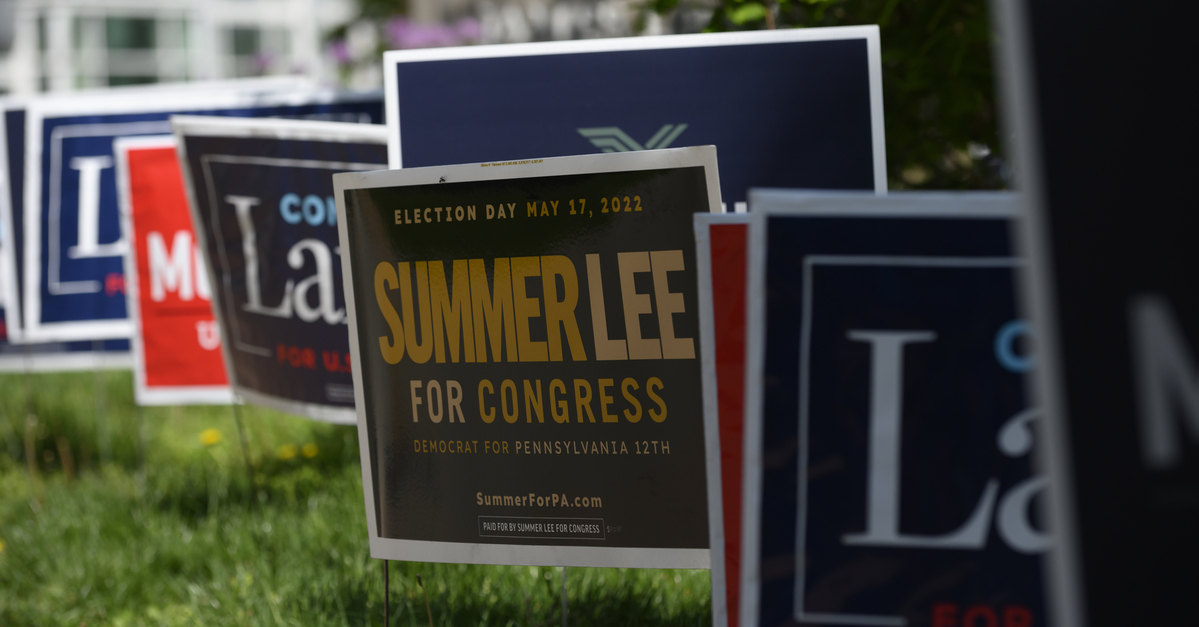 Campaign signs are seen on primary election day at the polls at the James Laughlin Hall on the campus of Chatham College on May 17, 2022 in Pittsburgh, Pennsylvania. Pennsylvanians will be voting to select candidates from each party’s primaries for a new governor, lieutenant governor, U.S. senator, and U.S representative.

The Pennsylvania Supreme Court on Tuesday ruled that county elections officials must segregate and not count mail-in ballots that arrive with “undated or incorrectly dated outer envelopes” for the upcoming midterm elections. The court did not opine on what will or might happen to such ballots after they are segregated.

The ruling, a victory for the GOP, is likely to impact thousands of votes.

Stylized as a “King’s Bench petition,” the lawsuit was filed directly with the Keystone State’s highest court and requested immediate relief.

Republicans argued that counting such ballots was in violation of the Pennsylvania Election Code and would dilute GOP votes as well as threaten the “integrity” of the “electoral process.”

Previous court decisions in Pennsylvania have authorized county elections officials to count ballots in envelopes without proper dates on them. The GOP, in their petition, successfully argued that those prior opinions lacked the power of precedent.

It is unclear what might become of the segregated ballots.

“We hereby DIRECT that the Pennsylvania county boards of elections segregate and preserve any ballots contained in undated or incorrectly dated outer envelopes,” the Pennsylvania Supreme Court wrote, in the terse, two-page, per curiam opinion.

In the order, the court cited two different sections of Pennsylvania state law dealing with absentee voting and mail-in voting, respectively. No analysis accompanied the brief order, but the court wrote that opinions would “follow” at a later time.

The court did note, however, that its members deadlocked 3-3 on the issue of whether failing to count the votes at issue was a violation of the materiality provisions of the federal Civil Rights Act.

No person acting under color of law shall . . . deny the right of any individual to vote in any election because of an error or omission on any record or paper relating to any application, registration, or other act requisite to voting, if such error or omission is not material in determining whether such individual is qualified under State law to vote in such election.

Justices Kevin Dougherty, a Democrat, and Sallie Updyke Mundy and Kevin Brobson, Republicans, disagreed that disallowing ballots arriving on time in such outer envelopes would violate the Civil Rights Act.

The Pennsylvania Supreme Court typically has a seventh member. That would-be tie-breaking vote was absent for the perhaps pivotal case because then-chief justice Max Baer died earlier this year.

Recently, the U.S. Supreme Court rubbished a curative stance toward Pennsylvania ballot dates that was previously promulgated by the Third Circuit Court of Appeals.