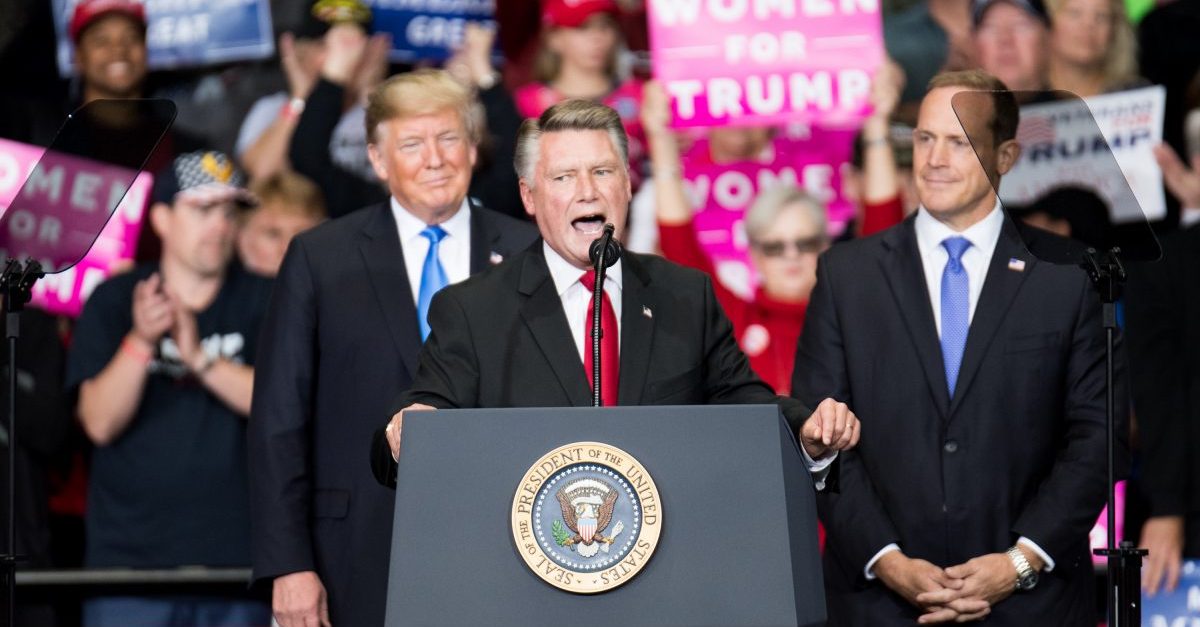 Republican pastor and would-be congressman Mark Harris will not run in the do-over election for North Carolina’s Ninth Congressional District, according to a statement released Tuesday afternoon.

Last week, the North Carolina State Board of Elections (NCSBE) determined the November election for the Ninth District was tainted by absentee ballot fraud on behalf of Harris–but stopped just short of alleging the former candidate himself was to blame. All parties involved in the days-long hearings eventually called for a new election. The NCSBE endorsed a re-vote after all was said and done.

Under a recently-passed law by the Tar Heel legislature, the proposed re-vote would also be required to hold additional primary elections. The prospect of Harris making it past a scandal-free Republican seemed a bit dim. Now, Harris won’t test his a luck a second time.

Harris quietly bowed out in a statement obtained by Law&Crime:

Given my health situation, the need to regain full strength, and the time of this surgery the last week of March, I have decided not to file in the new election for Congressional District 9. While few things in my life have brought me more joy than getting to meet and know the people this incredible part of North Carolina, and while I have been overwhelmed by the honor of their support for me as the Congressman-elect of NC-9, I owe it to Beth, my children and my six grandchildren to make the wisest decision for my health.

“I also owe it to the citizens of the Ninth District to have someone at full strength during the new campaign,” the Tuesday statement continued. “It is my hope that in the upcoming primary, a solid conservative leader will emerge to articulate the critical issues that face our nation.”

Law&Crime reached out to veteran and Democrat Dan McCready for comment on his one-time opponent’s decision to sit out a second election, but no response was forthcoming at the time of publication.

The North Carolina Republican Party simultaneously issued a statement of their own.

“The North Carolina Republican Party fully supports Dr. Harris’ decision,” Chair Robin Hayes said. “The most important thing for him to address is his health. This has been a grueling process for all involved, and we unequivocally support his call for a new election. There are numerous quality candidates that are discussing a run and although the Party will not be involved in a primary, we have no doubt that a competitive nominee will emerge.”

But that wasn’t quite all, as the North Carolina GOP’s statement went on to criticize perceived opponents, including the state elections board.

“We continue to be concerned that there is little interest determining how many votes were affected,” Hayes’ statement continued.

The statement also leveled the accusation that the NCBSE’s work had somehow lowered elections integrity, without elaborating as to why.

“The long-standing legal precedent on these issues has been to make an effort to protect legitimate votes cast in elections,” Hayes said. “No election is perfect, but lowering the standard for new elections may have significant consequences on our politics and electoral system in the future.”

Hayes and his team also reserved some ire for the Democratic Party:

A word to Dan McCready and his Democrat allies: You did not get more legal votes and there are no free lunches in politics. You will be held responsible for the extremist positions your Party has taken and your role to erase more than 283,000 legal votes by citizens of the Ninth Congressional District.

This is the guy Mark Harris just endorsed to be the Republican nominee in North Carolina’s 9th district pic.twitter.com/qc9bw8aRGt