GOP Campaign Worker in NC Admits to Filling in Republican Votes on Absentee Ballots, Claims She Was Told to Lie 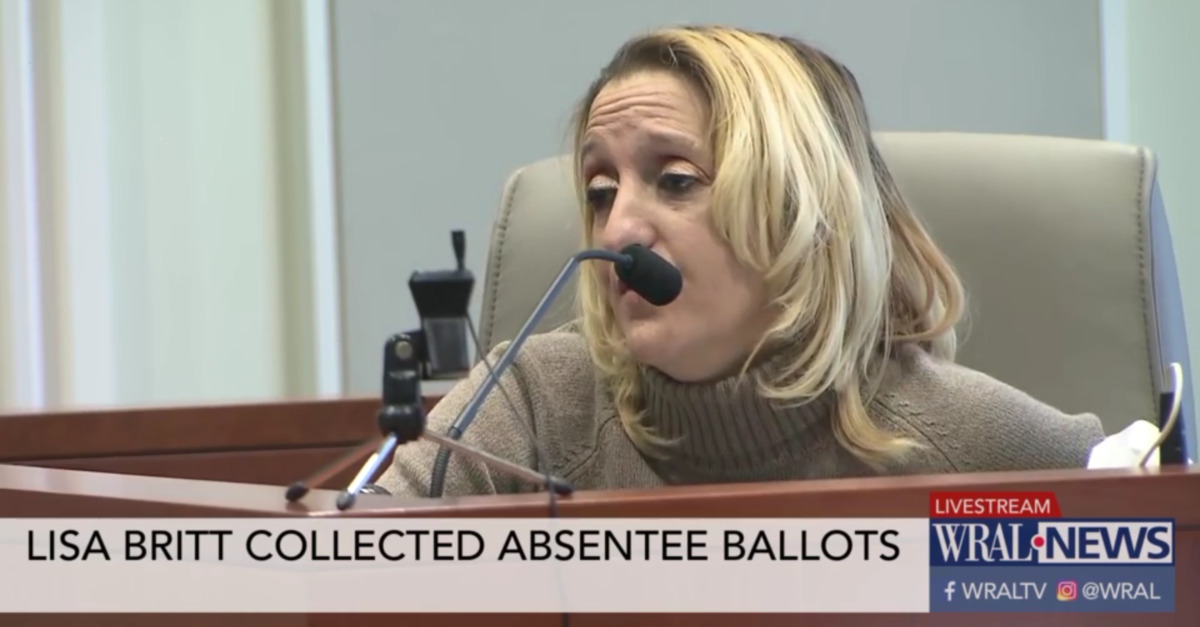 Republican Mark Harris initially appeared to have defeated Democrat Dan McCready by a razor-thin 905-vote margin on election night last November. That apparent victory was never certified, however, due to allegations that the GOP cobbled together their win through the use of absentee ballot fraud. At the center of those allegations is GOP campaign operative McCrae Dowless.

At a Monday evidentiary hearing conducted by the North Carolina State Board of Elections (NCSBE), a campaign worker employed by Dowless detailed several  aspects of the Republican campaign’s alleged efforts to steal the election for Harris in North Carolina’s 9th Congressional District. The same woman also said that when the alleged scheme was discovered, Dowless instructed her to lie about their efforts.

Lisa Britt was the first witness to give testimony at the NCSBE hearing. In her opening statement, Britt admitted that she did not tell the truth to a local news station about unlawfully collecting absentee ballots in violation of state law. During this interview–which was conducted in Dowless’ kitchen–Britt said that she and others employed by Dowless did nothing illegal during the 2018 midterm election. During Monday’s hearing, Britt walked all of that back.

Britt began working for Dowless in June or July of 2018 and said that she was paid according to the number of people she registered for absentee ballot request forms–and when she picked up absentee ballots. For every 50 ballots requested or obtained, Dowless would pay Britt and others between $125-175, she said.

“I took the signed, sealed ballot,” Britt said during her testimony about one specific ballot entered into evidence. “That ballot was turned back in with the other ballots I had collected that day.”

Britt said that she and other members of the Dowless team collected several unsealed ballots and opened them to ascertain who voters had selected. When voters had left certain races blank, Britt said, she and others would fill those races in for the Republican candidate. Britt also said that she was instructed to make copies of all absentee ballot request forms and that she kept them in a folder. The original forms, she said, were given to Dowless. Additional copies were also allegedly made for Bladen County Improvement Association PAC’s Lola Wooten–who Britt says was in Dowless’ office at least once a week.

Britt also admitted to filling out absentee ballot request forms at the direction of Dowless. One such form belonged to James Shipman–who somehow managed to sign his signature even though he is dead. Britt claimed not to have signed the form in question.

While Britt said she did not forge people’s signatures, she did admit to witnessing several absentee ballots–using two separate names.

Because Britt and another Dowless employee had witnessed so many absentee ballots, Britt says that she began signing her mom’s name because using the same two witnesses repeatedly “threw up a red flag”–an action that Britt said Dowless was aware of at the time.

Britt also said that Dowless wanted the forms filled out and witness signatures signed using the same color ink so as not to arouse suspicion. Similarly, Britt and Dowless would only mail completed absentee ballots 9 or 10 at a time–another way to avoid another “red flag,” she said.

And that’s not nearly all.

After county and state elections boards refused to certify the Harris win, Dowless allegedly had a meeting at his home with several alleged ballot mill staffers. During that meeting, Dowless allegedly told his employees not to admit that they ever collected absentee ballots and said, “as long as we stick together, we will be fine.”

Britt originally stuck with Dowless, she said, because she viewed him as a father figure. But as investigators tightened the screws, Britt says she came to believe that Dowless had done something wrong. Near the end of Britt’s testimony, she submitted a letter that she says Dowless gave her late last week. According to Britt, the letter outlined a statement Dowless wanted her to make at Monday’s hearing.

The letter reads, in full: