Report: New Emails May Be Linked to FBI Probe of Clinton Foundation 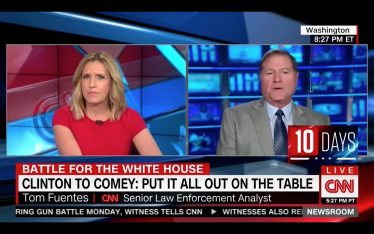 Former FBI Assistant Director and CNN law enforcement analyst Tom Fuentes appeared on-air Saturday night to discuss the circumstances surrounding the letter FBI Director James Comey sent to lawmakers on Friday.  Citing his sources at the FBI, Fuentes explained that there was a lot of context surrounding  the Comey letter that was not being discussed by the media.  Specifically, Fuentes said the newly discovered emails are also believed to be related to an ongoing FBI investigation of the Clinton Foundation.

Towards the end of the interview, Fuentes referenced reports from earlier this year that claimed the Department of Justice declined a request from multiple FBI field offices to open a formal investigation into the Clinton Foundation.  Fuentes said those reports are “not true.”  He explained that officials at FBI headquarters agreed to move forward with the Clinton Foundation investigation by consolidating the combined efforts of the FBI field offices into one investigation.

Fuentes then explained, based on his conversations with sources at the FBI, how the Clinton Foundation investigation may be impacted by the newly discovered emails referenced in the Comey letter.

“So that [Clinton Foundation] investigation is ongoing.  And Huma Abedin and her role and activities concerning the Secretary of State . . . and possible pay to play, that’s still being looked at,” Fuentes said.  “And now, we have her e-mails on the computer where the FBI already has a separate case going for Anthony Weiner’s activities with a minor girl. In a sense, it’s almost turned into a one stop shopping for the FBI as they could have implications affecting three separate investigations on one computer.”

Harlow then asked Fuentes to clarify his reference to the Clinton Foundation probe and to explain more about how all of this unfolded last week.

“The Clinton Foundation case didn’t need to be reopened. That’s ongoing, Fuentes said. “So . . .  the team looking at the Weiner’s computer, they went to the team of investigators that did the Clinton e-mail case and showed e-mails to them earlier in the week.  And that team said, ‘This is really significant. We need to take this to the director.  Maybe we need to take another look at the e-mail case.’”

Fuentes added, “But intermixed with all of this, is still the ongoing Foundation case.”