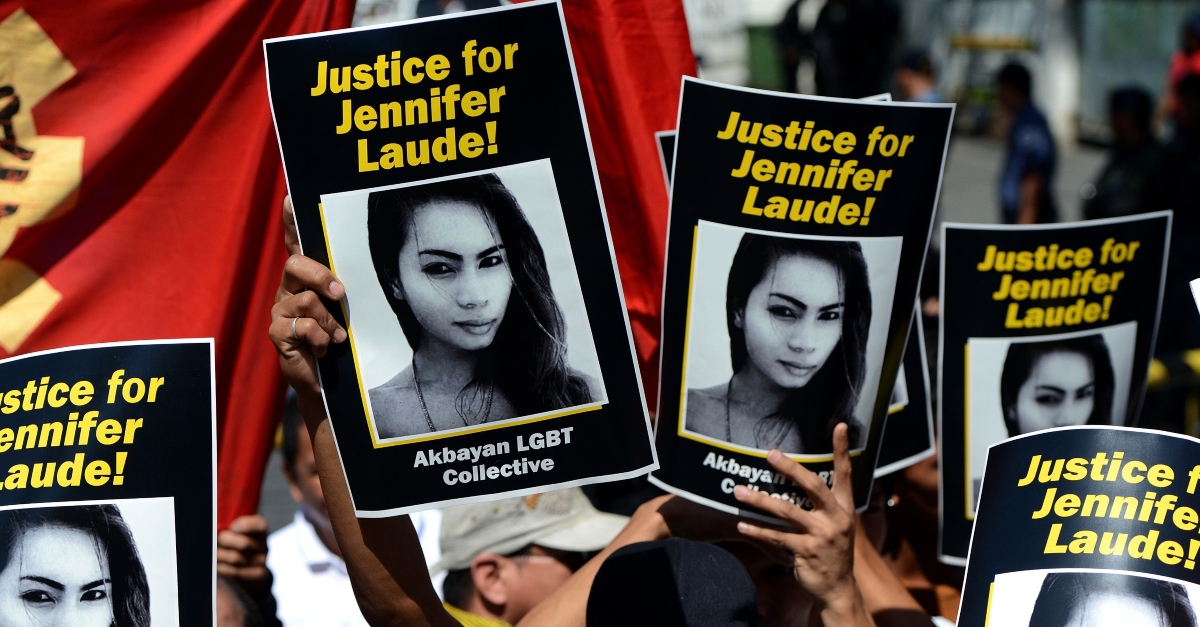 Rodrigo Duterte, president of the Philippines, has pardoned a U.S. Marine who killed a transgender woman in 2014.

“Cutting matters short over what constitutes time served, and since where he was detained was not in the prisoner’s control—and to do justice—the President has granted an absolute pardon to Pemberton,” Secretary of Foreign Affairs Teddy Locsin Jr. wrote Monday on Twitter.

Lance Corporal Joseph Scott Pemberton was convicted in 2015 of killing Jennifer Laude, 26. They met at a nightclub in the City of Olonagpo, and went across the street to a motel. Footage showed them entering the room together, but only Pemberton left. Laude was found dead, her head in the toilet. Cause of death: Drowning.

Pemberton insisted at trial that he only choked Laude to unconsciousness, and that she had been breathing when he last saw her. The defense asserted that Pemberton felt “raped,” claiming that Laude performed oral sex on him without telling him she was transgender, according to The New York Times.

Although charged with murder, Pemberton was ultimately convicted of the lesser crime of homicide. He was sentenced to six to 12 years in prison. That was changed to 10 years. Finally, the Olongapo City Regional Trial Court determined that Pemberton qualified for good conduct time. He served over five years and eight months behind bars. Laude’s family wanted to fight the decision, but Duterte stepped in and emphasized that Pemberton should be allowed “the good character presumption.”

BREAKING: A local court has ordered the release of Joseph Scott Pemberton, the US Marine convicted of killing transgender woman Jennifer Laude in 2014. https://t.co/tVSh57HH0x

The killing and the pardon both touched on cultural fissures in Philippine society. Critics suggested Pemberton was getting preferential treatment because he was an American.

In the Philippines, no case invites the discussion of White Guy Privilege more than the 2014 killing of trans woman Jennifer Laude. On Tuesday, a court approved an early release for Joseph Scott Pemberton, the U.S. Marine who killed her. https://t.co/9QIT5w8N1L

In a phone interview, Pemberton’s lawyer Rowena Flores dismissed the idea that he was receiving special treatment. She said the court even ruled he had been overstaying by around 40 days already, and he should be released immediately.