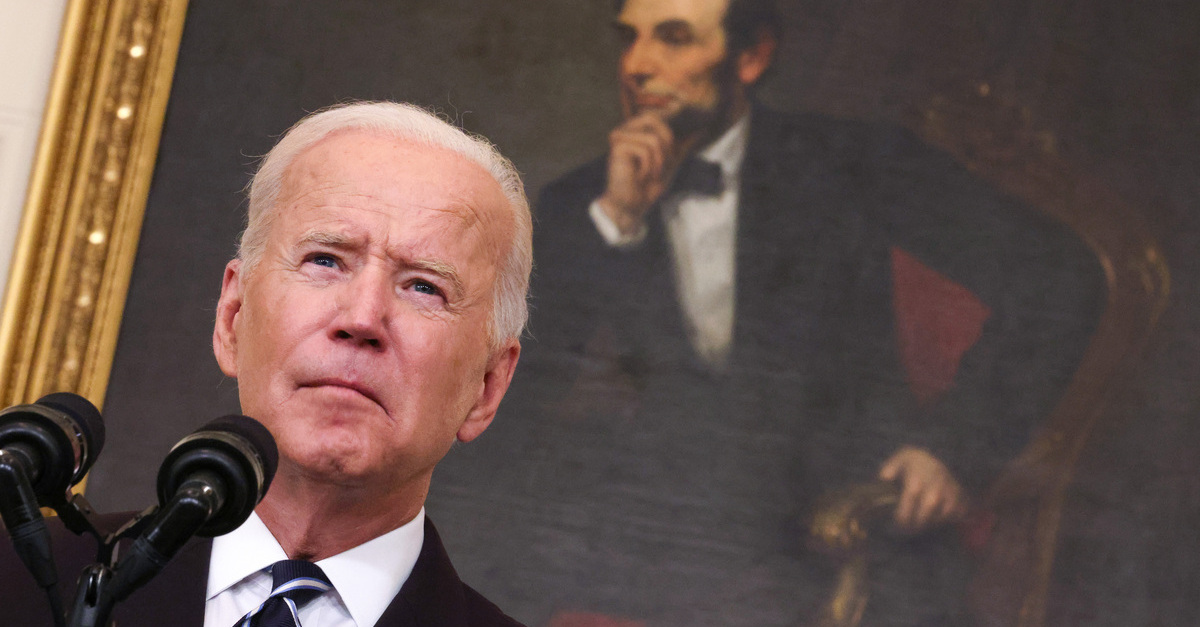 President Joe Biden speaks about combatting the coronavirus pandemic in the State Dining Room of the White House on Sept. 9, 2021 in Washington, D.C.

“This is not about freedom or personal choice,” Biden said during a press conference. “It’s about protecting yourself and those around you, the people you work with, the people you care about, the people you love. My job as president is to protect all Americans.”

The administration’s latest exercise of highly-publicized state power in response to the renewed COVID-19 pandemic was predictably met with grumbling from discontented online posters and commentators, primarily on the political right. Quickly after Biden’s plans were made public, the hashtag #DoNotComply spread on Twitter.

Legal experts, however, quickly noted that the vaccine mandates were likely to pass constitutional muster.

“This was resolved by the Supreme Court in 1905,” Chemerinsky said, referring to Jacobson v. Massachusetts.

Other legal experts offered a few caveats to the new proposals.

The first proposal will have the U.S. Department of Labor, under the auspices of the Occupational Safety and Health Administration, issue new rules that mandate any business with 100 or more employees enforce vaccine compliance among their workforce or maintain a regime where employees submit to weekly COVID-19 testing.

The new rules will further mandate that such large businesses must provide paid time off for their employees to receive the free vaccinations–and for any necessary post-vaccine recuperation.

“To continue efforts to ensure that no worker loses a dollar of pay because they get vaccinated, OSHA is developing a rule that will require employers with more than 100 employees to provide paid time off for the time it takes for workers to get vaccinated or to recover if they are under the weather post-vaccination,” the White House explained in a press release announcing the new directives.

“The issue is whether the government has the authority under some statute to order employers to require vaccination or weekly testing,” OSHA expert and Wake Forest University Law Professor Sid Shapiro told Law&Crime. “If such authority exists, it would be constitutional because Congress can regulate interstate commerce.”

New York City-based attorney and writer Luppe B. Luppen said the relevant statute was contained in OSHA’s authorizing legislation, the Occupational Health and Safety Act of 1970, which was signed into law by then-president Richard Nixon.

Here’s a CRS report on OSHA’s authority to do this from July. https://t.co/KkT1QepjZi pic.twitter.com/EeYL5W4Zg9

“OSHA has a legal mandate to protect workers from illness, just as it has protected workers from cancer causing chemicals used in the workplace,” Shapiro continued. “OSHA will have to meet its statutory requirement as to findings and evidence, but there should be no issue of constitutionality. Workers with a bona fide health or religious reason will likely be exempted because the failure to do so may present constitutional issues.”

“The OSH Act rule is certainly constitutional,” he told Law&Crime. “The federal government has regulated workplace safety since 1970, when Nixon signed the Occupational Safety and Health Act into law. The businesses covered by the Act are all regarded as either ‘in’ or ‘affecting’ interstate commerce and therefore within Congress’ power to regulate under Article I, section 8, clause 3 of the Constitution (the so-called ‘commerce clause’).”

Hills said the OSHA rules were likely to pass muster because they are authorized by the OSH Act itself which provides, in relevant part:

(a) Each employer —
(1) shall furnish to each of his employees employment and a place of employment which are free from recognized hazards that are causing or are likely to cause death or serious physical harm to his employees;
(2) shall comply with occupational safety and health standards promulgated under this Act.

The only potential issue with the OSHA mandate, Hills said, was “neither constitutional nor statutory but procedural.”

“The OSH Administrator will likely have to go through notice and comment rule-making process to enact this policy unless the agency can take advantage of the exception for ‘good cause’ provided by section 553(b)(3)(B) of the Administrative Procedure Act,” he continued. “Notice and comment rule-making can take many months and sometimes years. I imagine, however, that there is probably ‘good cause’ to promulgate the rule immediately and solicit comments while the rule goes into effect. Good cause usually exists when there is an immediate need to install a rule to avoid immediate harm. Surely, that is the case with COVID infections.”

While the Administrative Procedure Act may, in theory, provide both hurdles and legs needed to jump them, other legal experts noted that the underlying statute would likely short-circuit any APA-based challenge to the mandate.

“Biden’s COVID vaccine mandate easily falls within the commerce clause because it applies to employers with 100 or more employees, and the OSH Act specifically provides for Emergency Temporary Standards for employee safety, without regard to the Administrative Procedures Act,” attorney Max Kennerly explained via Twitter.

A different set of rules issued by the Centers for Medicare and Medicaid Services will require all health care workers at any facility that receives Medicare or Medicaid reimbursements–which includes the overwhelming majority of health care facilities in the country–to be vaccinated. This rule is estimated to impact some 50,000 health care facilities and will apply to all “CMS-regulated settings, including clinical staff, individuals providing services under arrangements, volunteers, and staff who are not involved in direct patient, resident, or client care,” according to the White House.

“I am expanding vaccination requirements to cover those who work in hospitals, home health care facilities, and other medical facilities,” the president said via Twitter. “If you are seeking care at a health facility, you should know that the people treating you are vaccinated. Period.”

The CMS is working in conjunction with the Centers for Disease Control and Prevention on an interim final rule with a notice-and-comment period, according to HomeCare magazine, suggesting the administration will work through standard APA procedures to secure the legal foundation necessary to enforce the health care worker mandate. The agencies’ action here builds on vaccine requirements for nursing facilities promulgated as regulations earlier this year.

According to the Congressional Research Service, the Commerce Clause gives an agency operating under delegated congressional authority the power to issue a mandate that would be legally sound if “structured as requirements on entities in interstate commerce, such as a requirement on entities to verify vaccination status.”

“Under this authority, which is subject to several limitations, Congress may offer federal funds to nonfederal entities and prescribe the terms and conditions under which the funds are accepted and used by recipients,” CRS notes. “Over the past century, Congress has frequently invoked this authority in the public health context, including for purposes of controlling specified diseases, establishing neighborhood or community health centers, and creating federal health insurance programs, including Medicare and Medicaid.”

Finally, the administration will require all federal employees and “employees of contractors that do business with the federal government” to be vaccinated.

According to the Associated Press, the federal employee and contractor mandate will not have an option for covered workers to test out.

Shapiro was adamant that the contractor mandate also presented “no constitutional issue since contracting with the government is voluntary.”

“You don’t have to do it, but if you do it you’re subject to the conditions that the government establishes for such contracting,” he explained. “Again, the issue is one of statutory authority. My understanding is that the government generally can impose health and safety requirements on government contractors under existing law.”

“[T]here is one obvious source of statutory authority here,” Hills added. “The 1949 Procurement Act provides that the President is responsible for administering ‘an economical and efficient system for the procurement and supply of personal property and non-personal services.’ It is well-established that, subject to statutory limits, the President can, through the Office of Federal Contract Compliance Programs (in the Department of Labor) can make rules to carry out this general statutory duty.”