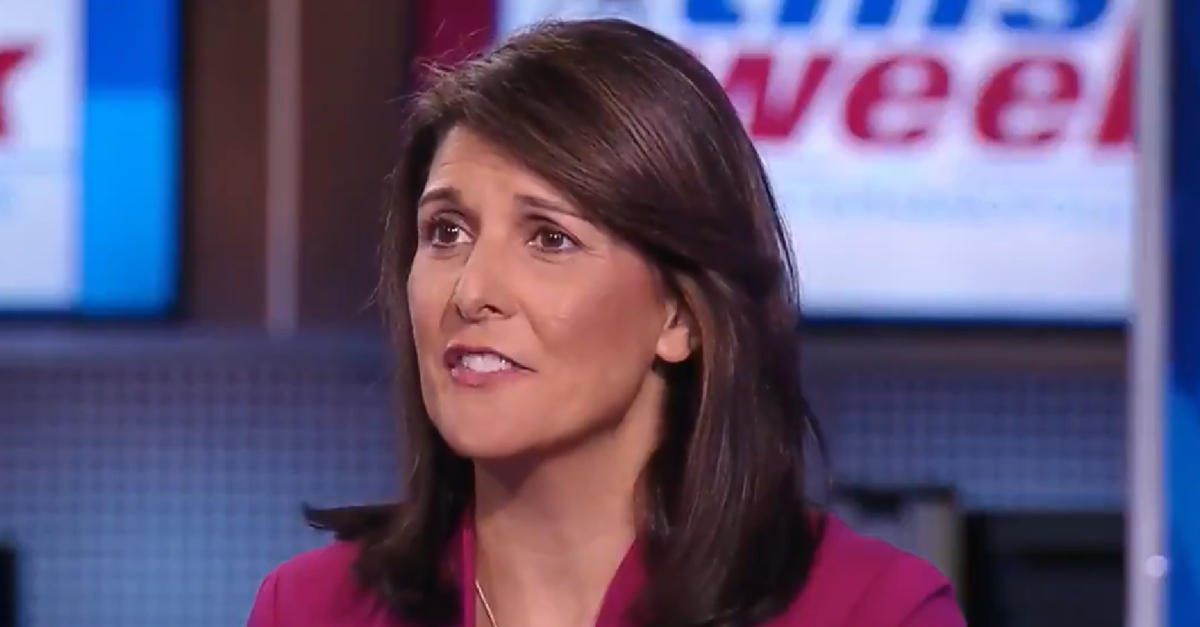 Nikki Haley, who announced on October 9 that she would be stepping down as the 29th U.S. ambassador to the United Nations later this year, accepted around $24,000 worth of luxury travel from her former political donors, according to a non-partisan and nonprofit government watchdog.

According to a press release from Citizens for Responsibility and Ethics in Washington (CREW), the one-time South Carolina governor “accepted seven free flights for herself and her husband on luxury private aircraft from three South Carolina businessmen who had previously supported her political campaigns.”

“We estimated that the total cost of these flights was around $24,000,” the release continues. “By the standards of the Trump administration, this may not be a huge amount, but for a senior administration official to be accepting flights in private planes from former political supporters does not pass the smell test and should at least be investigated to ensure that it did not violate ethics guidelines.”

Law&Crime reached out to CREW for clarification on how they arrived at the $24,000 number but no response was forthcoming at the time of publication.

CREW called for an inspector general investigation into these alleged ethical lapses by Haley on October 8. In a statement, the group said:

Nikki Haley should be investigated to determine if she complied with ethics regulations when she accepted [the flights in question] … Those flights were between New York, Washington, DC, and three cities in her home state of South Carolina, and appear to have been worth tens of thousands of dollars to her. In her financial disclosure report, Ambassador Haley asserted that each gifted flight qualified for an exception based on a personal relationship with the giver.

The next day, Haley promptly announced her impending resignation from the international body.

CREW itself took note of the timeline, while admitting that no direct evidence suggests a link between their investigatory demand and Haley’s imminent departure from the UN.

“Less than 24 hours after we requested an investigation, she announced her resignation,” Monday’s press release reads. “Though the timing of Haley’s resignation is probably unrelated to our request, Haley is only the latest example of a pattern of senior Trump administration officials with ethics issues, from accepting gifts from lobbyists and flying on private jets, to violating the Emoluments Clause of the Constitution.”

According to Open Secrets, the three businessmen have donated in excess of $130,000 to GOP candidates over the years. McKissick’s company–Alice Manufacturing–has donated some $32,000 to Haley’s gubernatorial campaigns directly and by way of a South Carolina nonprofit known as The Movement Fund. The campaign finance disclosure group also notes that McKissick and Johnson were both volunteer fundraisers for Haley’s 2013 re-election campaign.

CREW’s Executive Director Noah Bookbinder said the free luxury flights she received from her former donors saved the ambassador large amounts of money and resulted in at least the optics of corruption.

“By accepting gifts of luxury private flights, Ambassador Haley seems to be falling in line with other Trump administration officials who are reaping personal benefits from their public positions,” Bookbinder said. “Our ethics laws are clearly written to prevent even the appearance of corruption and improper influence.”

The non-partisan group–which frequently criticizes what it perceives as unethical and illegal behavior from members of both major political parties–also went on to note that Haley has had ethical issues in the past:

Haley herself was not a stranger to ethical lapses, having previously been reprimanded for illegally using her position for partisan politics in violation of the Hatch Act, following a CREW complaint.

Law&Crime reached out to the U.S. Mission for the United Nations for comment on the allegations against Haley but did not receive a response.