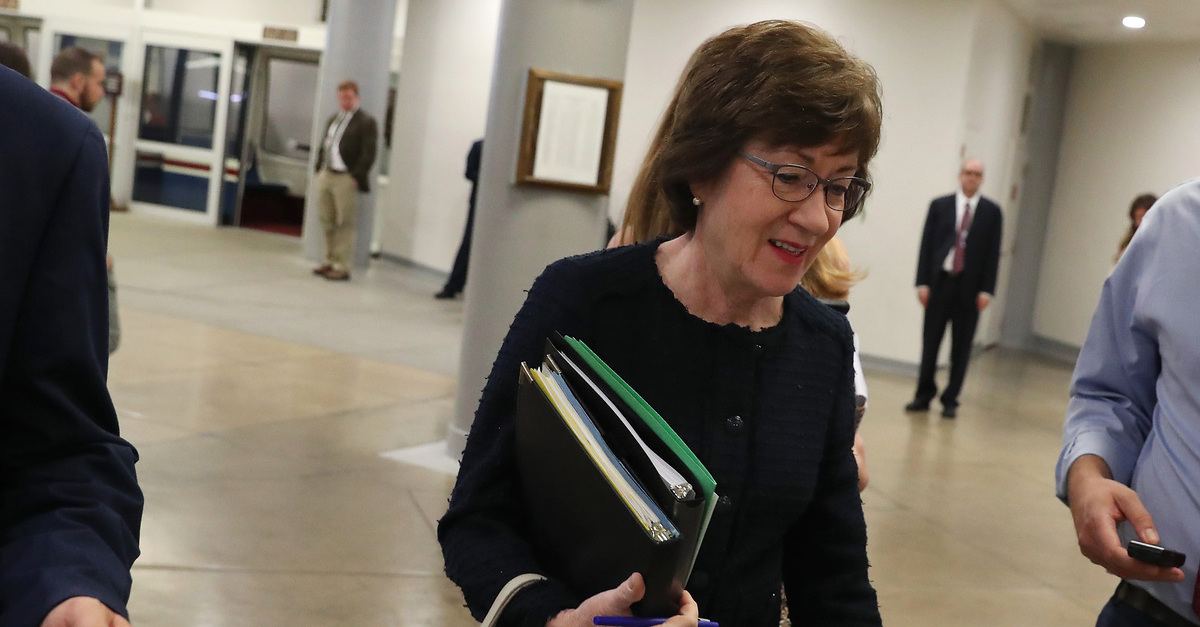 Maine’s senior Senator Susan Collins (R) was once a beloved myth-maker in her home state and beyond; an electoral powerhouse and one of the last vestiges of that elusive–and largely media-enabled-and-created–phenomenon known as the “moderate Republican.”

A new poll, however, suggests that Collins has reached the twilight of her career due in large part to her vote to confirm Brett Kavanaugh to the Supreme Court — despite allegations of sexual assault against Kavanaugh and despite Collins’s pledge not to not vote for a nominee who demonstrated “hostility” to Roe v. Wade. Collins has said that when she spoke with Kavanaugh they talked “at great length about precedent and the application of stare decisis.” According to Collins, Kavanaugh said he “agreed with what Justice Roberts said at his nomination hearing, in which he said that [Roe] was settled law.”

Public Policy Polling (PPP) released data on Tuesday showing that only 35 percent of Pine Tree State voters currently approve of the job Collins is doing in the Senate while 50 percent of voters disapprove.

And in that poll she trails a generic Democratic Party politician by 44-41 percent. Those are strikingly poor numbers for an incumbent–much less an incumbent who has been a fixture of Maine politics for over three decades. Collins was first elected to the Senate in 1996.

The never-missed-a-vote Senator’s current numbers are a stark contrast to a similar poll conducted by PPP last September which showed her leading a generic Democrat by six points at 44-38 percent; representing a nine point swing against her favor.

And, the pollster claims, most of the lack in her long-earned luster is due to Collins’ support for the still-controversial Justice Kavanaugh.

A press release notes that in PPP’s September poll, “she only trailed 64-21 among Clinton voters but in the wake of her vote on Brett Kavanaugh and the general hardening of partisan lines she’s lost a lot of her crossover support and now trails 76-12 with Clinton voters.”

Collins own behavior as of late has likely contributed to the bitter taste left in Mainers’ mouths by her Brett Kavanaugh vote.

In early October, Collins cited her support for Kavanaugh–and fund-raised off of her support–arguing that she was instrumental in pushing the conservative jurist over the finish line in his tempestuous bid for a lifetime seat on the nation’s high court.

“This is urgent,” Collins wrote in an email sent to GOP donors on behalf of the National Republican Senate Committee (NRSC). “Without a Republican Senate Majority, Justice Kavanaugh’s confirmation would’ve been derailed by liberal extremists. The Left only needs to flip 4 seats to take control of the Senate, and that would be the end of our common-sense agenda for America.”

That fundraising email also called out Massachusetts Senator and Democratic presidential front-runner Elizabeth Warren by name–in response to a pledge from the progressive candidate that her 2020 campaign would spend considerable resources to unseat Collins.

“The far left will go to extremes to defeat Republicans,” the email noted. “Elizabeth Warren is even sending staffers and resources into Maine to try to unseat me. I have already seen millions spent against me, and these attacks will only get worse as Election Day nears.”

In fact, Collins’s key support for Kavanaugh is a huge sticking point for many progressives and liberals inside of Maine as well.

Sara Gideon is the Speaker of the Maine House of Representatives. She’s currently running near the top of the Democratic primary for the seat held by Collins and said lingering resentment over her drama-filled vote for Kavanaugh was a primary reason Maine turned against Collins.

“Senator Collins voted to confirm Brett Kavanaugh despite evidence and allegations that cast serious doubt on his fitness for the supreme court, and that vote is one example of the many ways in which she has let Mainers down,” Gideon told The Guardian.

There are other potential pitfalls for Collins as well. That is, the politics of impeachment would likely doom Collins.

53% of Mainers support impeaching Donald Trump with 44% opposed. When we ask voters who they would choose if Collins opposed impeachment, her 76-12 deficit among Clinton voters grows even further to 83-8 and she goes from a 3 point deficit against a generic Democratic opponent for reelection to a 7 point deficit at 47-40.

And, the pollster notes, if Collins were to somehow semi-miraculously support President Trump’s impeachment, she would almost certainly lose her own party’s primary–where, even if she remains opposed to impeachment, she currently trails two potential rivals.

The North Carolina-based polling outfit surveyed 939 Maine voters via telephone and text message from October 11 through October 13. The poll has a margin of error of plus/minus 3.2 percent.